Michigan Birds of Prey Migrate Across Straits of Mackinac 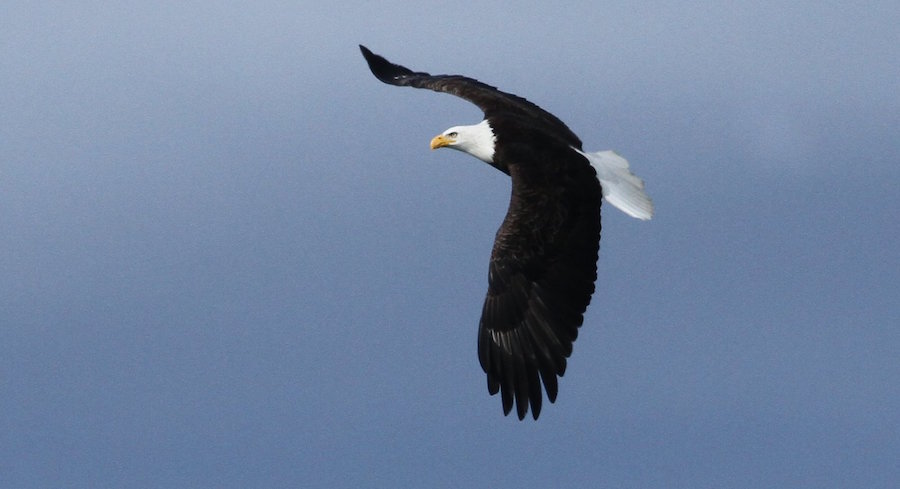 Each spring, thousands of birds migrate north for other food sources and to breed. And, because of its geography between Lake Michigan and Lake Huron, the Straits of Mackinac is one of the best places in the country for studying Northern Michigan birds of prey during the migration season.

To help educate the public about the importance of the Straits of Mackinac as a migratory pathway and to conserve the resting and feeding habitat for Northern Michigan birds of prey in the region, the Mackinac Straits Raptor Watch conducts a yearly count and annual studies in Mackinaw City on the numbers and timing of migrating birds.

The migration period varies from year to year depending on the weather. This year, the Mackinac Straits Raptor Watch began counting raptors (birds of prey) on March 5 and will continue through June 5. During the first week, the watch team observed over 500 birds. Among the 13 species spotted so far, there have been 142 bald eagles, 134 golden eagles, and 36 red-shouldered hawks.

The numbers will increase later in the season as thousands of birds will make their way north. Kevin Georg, the program’s official recorder, counts the birds from behind the Mackinaw City Recreation Complex. The public is invited to join, and can find updates from Kevin about the weather and previous day’s numbers under the Mackinac Straits Raptor Watch news section. There are nearby bathrooms and restaurants, and you don’t have to hike to get to the area. “Last year we had almost 1,000 people come to watch the migration,” says Kathy Bricker, a Mackinac Straits Raptor Watch volunteer. “It was incredible.”

In 2015, more than 50,000 birds were counted including turkey vultures, ospreys, goshawks, kestrels, and Cooper’s hawks. “Bird health is directly and indirectly tied to human health,” Kathy says. “For instance, bald eagle eggs were so softened by DDT accumulations that they cracked when adults incubated them. People heeded this and other signs of the dangers of such pesticides, which ultimately were banned in the U.S. Likewise, the types and numbers of birds tell biologists and conservationists about the health of forests. In particular, apex predators such as hawks and owls play key roles in the complex food web that controls rodent and insect numbers.”

This spring, the Mackinac Straits Raptor Watch will also conduct their first waterbird count with a paid contractor. “We want to learn and communicate how important the Straits of Mackinac region is to migrating ducks, swans, grebes, loons, and other waterbird species.,” Kathy says. “Such baseline data has never been gathered here and the volunteer-run observations we conducted in the fall of 2015 indicated that water quality could be extremely important to many birds.” In the fall, the volunteers logged 169.5 hours of bird watching and observed over 18,000 waterbirds from 28 species.

This year, the Mackinac Straits Raptor Watch will also host the first Mackinaw Raptor Fest from Friday, April 1 through Saturday, April 2. The event includes both free and registration-only events such as keynote speaker William Bowerman, who will discuss levels of environmental pollutants in Michigan and their effects on bald eagles. Get the full schedule of events here, and check out www.mackinacraptorwatch.org for other program and trip announcements.

Mackinac Straits Raptor Watch is a non-profit organization funded through charitable donations. Click here to learn how to join or contribute.

Information and data about the Northern Michigan birds of prey count can be found online at HawkCount.org under the Mackinac Straits (Michigan) section.