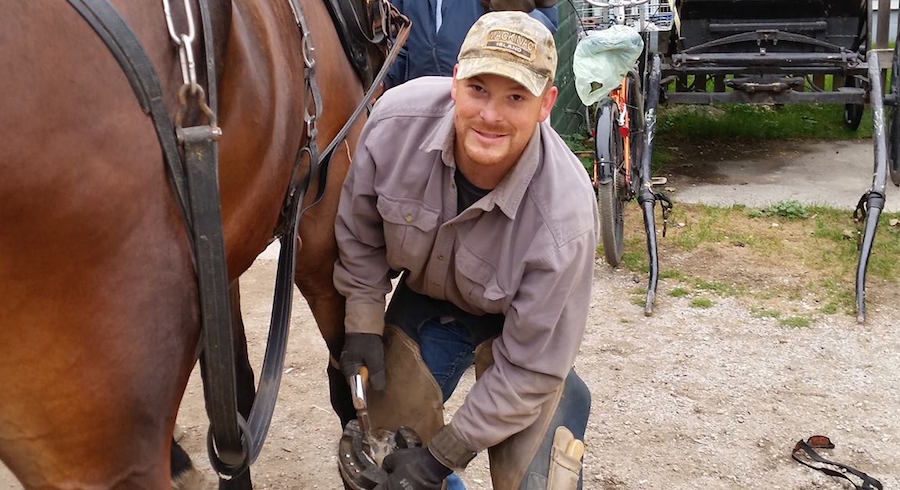 Mackinac Island blacksmith Chad Osborne is being featured on Season 2 of the History Channel’s popular show “Forged in Fire.” Each week, four of the best bladesmiths in the country face off in grueling challenges that test their skills and creativity. Chad will appear on Episode 7, The Shotel, which airs tonight at 10 p.m.

The History Channel episode description states, “Four bladesmiths face the unpredictable challenge of taking high carbon steel and wrought iron and forging these two conflicting materials into a fully functional weapon. After a formidable round of testing, only two will move on to the final round where they’ll have just five days to create one of the most beautifully designed blades in history, the Ethiopian Shotel.”

Chad, who recently won the EQUUS Professional Horseman Award Contest, has worked at Jack’s Livery Stable and Cindy’s Riding Stable on Mackinac Island. Watch the episode tonight and see if he takes home the title “Forged in Fire” Champion.

We caught up with Chad this afternoon to talk about “Forged in Fire” and blacksmithing.

A sample of Chad’s work.

What’s it like to be featured on the show?

“You feel a little nervous about being around some of the best bladesmiths in the country. All of them were very friendly, kind of like a family member you haven’t seen in a while.”

How would you describe your experience?

“It was very fun being on the show, you get a little taste of what actors do, retakes, and how long the days are. It took almost 10 days for them to make a 44-minute show. When you watch it at home you don’t realize how long it takes. For example, the blades are made in 3 hours, then they get tempered in the oven. You come back the next day, and one person is eliminated. Then you have 3 hours to put handles on your blade. You come back the next day and the judges do a performance test, then one more person is eliminated. When it’s down to two people, they go home to their home forge and have 45 hours, in a five-day period, to make the appropriate blade/weapon. Then there is a two-day break and you fly back to the studio. The next day is very long, then they have a performance test, then they pick a winner, then you come home the next day. A lot like work.”

When did you first become a blacksmith, and how did you learn the trade?

What do you enjoy about it, and what are your favorite things to make?

“I enjoy all aspects of blacksmithing, and my favorite thing to make is anything that gets a lot of use, especially knives and tomahawks.”

“You get a great satisfaction blacksmithing because you bend the steel at your will and shape it into whatever you want.”

Tune into the History Channel tonight at 10 p.m. to see Mackinac Island blacksmith Chad Osborne on Episode 7 of Forged in Fire!