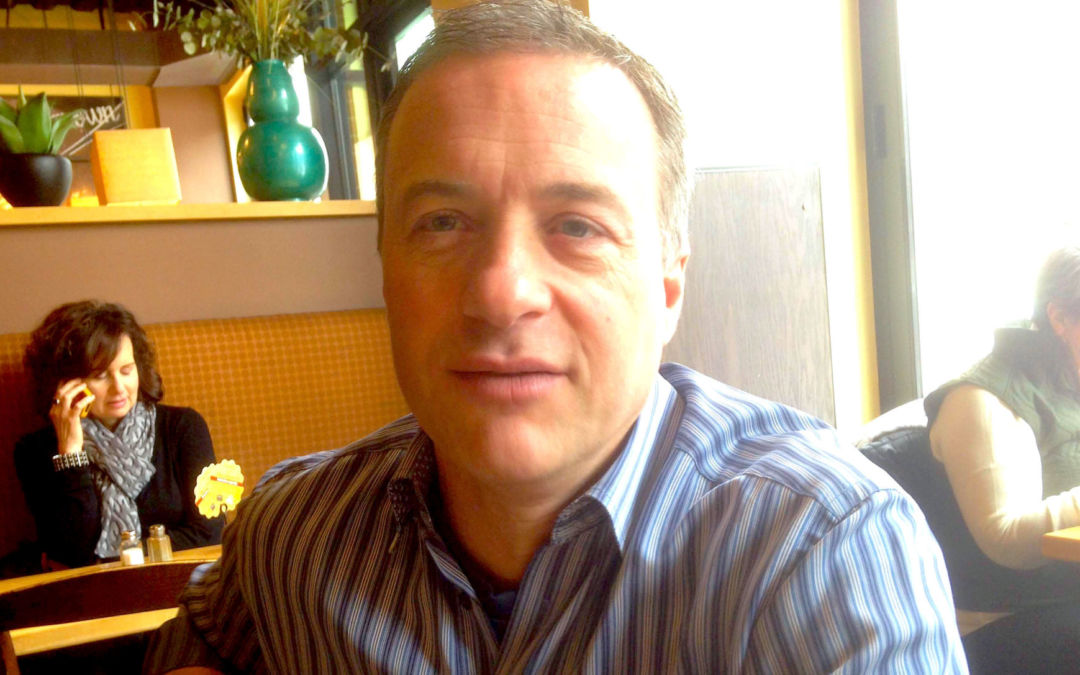 Leelanau County author Michael Dow recently released his novel, Dark Matters, a near-future thriller that explores what might happen when the super rich have the wealth and power of nations, and scientific discovery might disrupt the status quo.

Dow spent more than 25 years immersed in the national and international business world, including a stint as CEO of a management consulting company in Washington, D.C. Then, a few years ago, he stepped away, selling the company and pursuing his desire to write novels from his home in Leelanau County.

By the way, Dow convinces us that that scenario of trillionaires with a stunning degree of power and troubling access to technology is not fantasy, but is in fact the future we face.

We sat down with Michael Dow in Grand Traverse Pie Company’s downtown Traverse City cafe to get some backstory.

Let’s talk first about the science part of this story that inspired the title Dark Matters. Where did that come from?

I’ve had the “dark matter” concept bouncing around in my head for decades. I’ve been an amateur physicist for my whole life. I’m just fascinated by all that.

So the science piece is a great driver for the plot, but the real theme is income inequality. Give us some perspective on that.

So this is the piece of reality that makes the book so compelling.

Well, run that out a few generations and think about a handful of super wealthy and the technology that will exist in 60 or 70 years. Video surveillance, robotics, owning of the media. A handful of guys already own a big chunk of the media. We will have a dozen people with a trillion in net worth by 2075, which is when this book takes place.

Put a finer point on that. What are some specific things a trillionaire could do?

At one point in writing the book, I thought, what could the 10 richest guys in America today do if they they really wanted to. If they just took the interest income on their money, they could put a 2,500-person staff in D.C. and another 100 people in each state and could make a phone call a month to every person in the United States, and still have money to buy half the advertising in the United States, print, web, TV, everything. A trillionaire could have an entire satellite fleet and not even put a dent in his fortune. In 40 years computers will have the processing capability of a human brain … combine that technology capability with the wealth of a trillionaire. I didn’t even think about it all till I really thought it through while writing the book.

Why didn’t you just write a nonfiction book about income inequality?

The nonfiction books on income inequality … they are a tough read. Not very many people are really going to read them. This is a way to bring that topic in an entertaining fashion.

And it’s the hottest topic in the national elections.

I really wanted to release it in the 2016 election cycle.

Okay, don’t spoil it, but give us a plot summary.

Two people coming from different approaches figure out dark matter, and it’s an earth-shattering revelation that can upset the status quo. It’s 2075, and that is about when we will hit 10 billion people on the planet. It’s not sustainable. And the impacts of climate change are hitting. It’s a world on the edge. The Consortium is a group of trillionaires who see themselves as saviors, people trying to figure out a stable end game that allows humanity to move forward. But the power associated with that much wealth over time has twisted certain mindsets.

Lastly, what are you liking about Leelanau and the writing process?

This is the kind of thing that Northern Michigan does to people. It’s a very creative place. People come here, figure out a way to make a living so they can do a creative thing. In Washington, D.C., things are much more homogeneous. We were all doing the same things. I didn’t have a winemaker next door and a construction guy friend. The creativity thing up here, it spurs your own thought processes.

Buy the book Dark Matters by Michael Dow at darkmattersbook.com.