A Dog Finds a Home 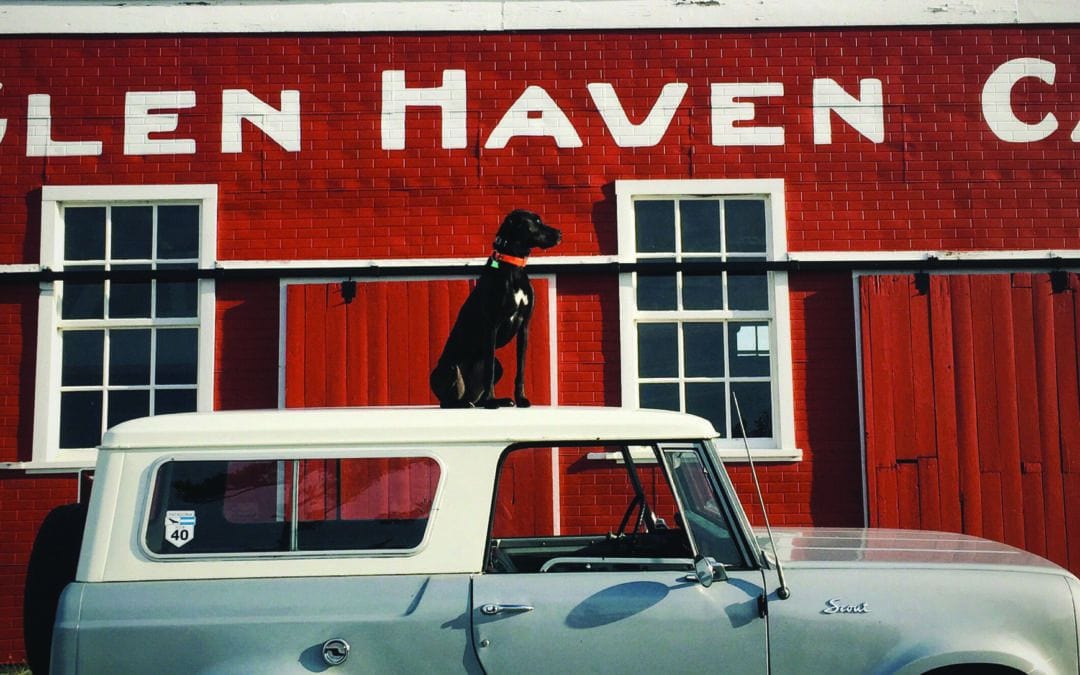 “Did she even care that I scooped her up off the side of the road that November day?” Sam Brown tells us about the day he found a dog in Northern Michigan, and his life was forever changed.

Featured in the March 2016 issue of Traverse Magazine.

My dog doesn’t care that I spent 24 hours marinating that pork tenderloin, especially as it slides down her throat in one selfish gulp. Same goes for the dozen eggs I left on the counter, the venison thawing in the sink, or the box of crayons on the shelf.

I found her on a day when most people chose to stay inside. Rain filled the potholes on a lonely stretch of country two-lane, and while I was trying to avoid them, a skinny black dog walked into the middle of the road. I pulled over on the gravel shoulder and swung the door open. She plopped two wet paws in my lap and quickly helped herself into the truck with no working heater.

“What’s that?” My wife gasped in the doorway to our home.

“Well, obviously. Where did you find it?”

“Out west of town, she walked right out in front of me.

I couldn’t just leave her there.”

She hadn’t been in the house 30 seconds, and she was curled up in an impossibly small ball on our couch.

Who couldn’t love this dog?

My wife and I, actually, more times than we’d like to admit. Our efforts to civilize a stray dog were met by the rebellion and disregard of an animal that lived by its own rules. Can a dog be grateful? Did she even care that I scooped her up off the side of the road that November day?

Slowly she gained weight and eased into a lifestyle much different from the nomadic existence we imagined she’d been living. We tried to teach her the basic commands. No. Come. Sit. Stay. But each was met with increasing resistance. Bad manners, ingrained during a life on her own, exposed themselves quickly. But calling her bad is a little unfair; it’s not like an abandoned house pet can learn to survive by being polite.

My wife and I would wonder if we should be mad or impressed at this dog’s ability to eat anything and everything. There was no wondering how she survived on her own after we watched her chase, catch and consume a squirrel—swallowing it whole, no chewing or gnawing required.

Her owner was nowhere to be found, ads went unanswered, phone calls were never returned. After several weeks of keeping our distance, trying not to get attached to a dog that might be returned to its rightful owner, we committed.

Layla, we named her, but not after Eric Clapton’s song. It was only later we learned “Layla” means night or dark haired beauty in Arabic. She noticed when our commitment changed, when we began buying expensive food, swapped the piles of blankets for a dog bed, and put a collar around her neck with tags that jangled when she ran. Slowly, her submission to this life, and new masters, was noticeable.

We made a commitment. No matter how much food she ate off our table, how many clothes she chewed or carpets she stained, she was our responsibility. She just didn’t know better, and punishing her for rules she did not know would be cruel. Dogs emulate their owners, and if a dog is poorly trained, it shows the lack of responsibility and commitment of the owner; because—believe it or not—a dog cannot read your mind.

Layla began to obey commands, because she wanted to, not because disobedience was met with punishment. A somewhat untraditional approach to training a dog, but it worked, and it was in her biology to obey and follow a master. Most behavioral problems in dogs come from the dog trying to lead. It’s up to the owner to respond to this need, to be the leader and train a dog to listen because it wants to, not because it has to.

And eventually—key word “eventually”—Layla began to adhere to our expectations. She only unleashed her wild side with ferocity when we’d go on long walks in the woods, the same woods she roamed before I found her. She found dead stuff to eat, chased rabbits with reckless abandon through blackberry thickets. One time she tackled a running doe, but the deer ran off unharmed. Layla, foaming at the mouth, panting with her pink tongue hanging to the side, basked in the pure satisfaction of using the instincts she survived with, regardless of how upset I was with her.

I won’t ever hear Layla say how much our relationship means to her, or how grateful she is for the life we’ve given her. But I don’t need to, because the gratitude is there in her brown eyes when I throw a blanket on top of her, sneak a little venison in her food, or pull porcupine quills out of her mouth. It’s in the way she burrows her way between my wife and me while we sleep on a cold night with the window open, or rests her head on my lap while I write this essay.