10 Ways to Wing a Northern Michigan Vacation in April 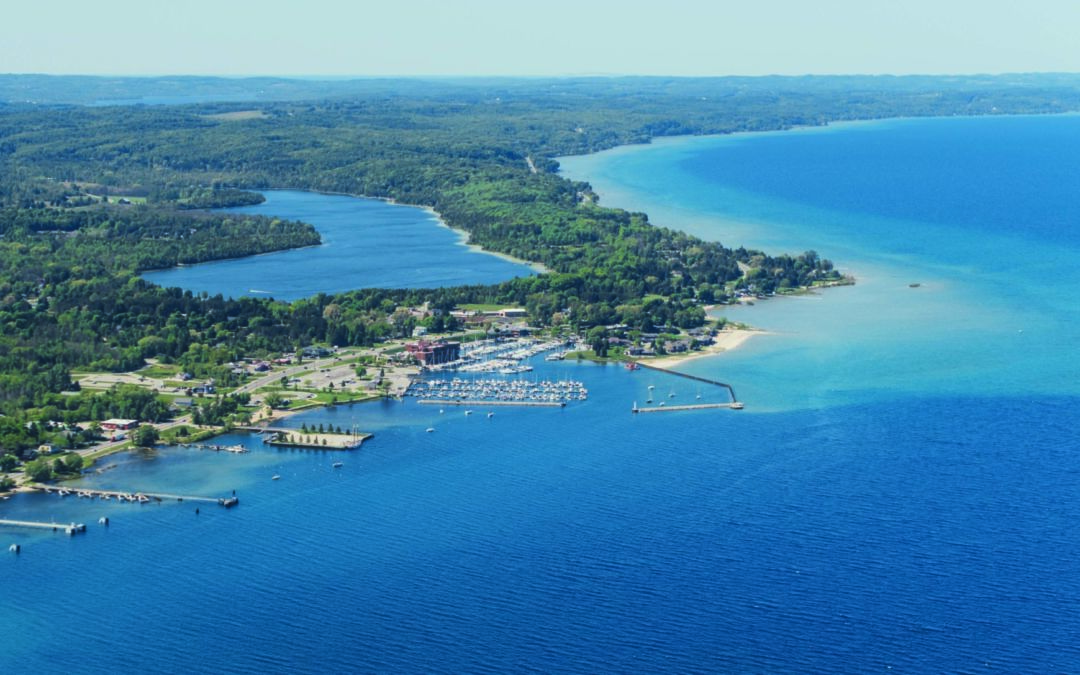 Fly like a bird, over bays, from the warmth of your helicopter seat, just $59 and up via TC Helicopters’ TC Flying Adventures. As your base, a tower room at the Grand Traverse Resort and Spa is a perch even an eagle would approve of. (The tower’s restaurant’s name is Aerie, after all.)

By day, hike the shoreline and arboretum trails at the Lake Bluff Bird Sanctuary in Manistee—1,500 acres of Lake Michigan shoreline echo in song at the height of spring bird migration. By night, stay at the sanctuary’s cozy B&B ($80–$95/night), but not until after enjoying a bit of stargazing at Orchard Beach State Park, one of several state parks commemorating International Dark Sky Week (April 4–10).

Watch kettles of hawks spiral in the sky at Mackinaw City’s first ever Mackinaw Raptor Festival (April 2), or any day this month; it’s not uncommon to see several hundred birds aloft and crossing the Straits. The fest features sessions on photography, identifying hawks in flight and more.

They fly at night, all seven or eight tiny inches of them, so if you want to see the oh-so-adorable Northern saw-whet owls up close, a good option is to join the April 8 and 9 weekend owl banding and star gazing night at Headlands International Dark Sky Park near Mackinaw City, timed to catch the waxing crescent moon and owl migration peak. Reservations needed: 231.348.1713.

You may have the Seney National Wildlife Refuge to yourself in April—well, save for the bears rousing from their dens, the spring peepers croaking their mating songs and the Canada geese, loons and trumpeter swans returning from their winter snowbird roosts. Find cozy, family-owned hotels in nearby Newberry.

Hop the ferry, which starts running again this month, to Beaver Island, where the Beaver Island Birding Trail covers some 100 miles of road and 12,000 acres of gorgeous habitat. Spot some of the 250 migrating bird species from the windows of cozy Emerald Isle Hotel—or plan ahead for the island’s new Warblers on the Water Festival, May 27–29.

Earth and sky meld elegantly at the Inn at Black Star Farms, where upper floor rooms with names like Lyra, Vega and Polaris connect to the sky; locally sourced breakfasts and themed dinners connect you to the earth. Stays include private tastings, in-room fireplaces, nightly hospitality hour with wine and hors d’oeuvres, access to hiking trails and more.

Zipline through the sky—or at least well above some impressive ski slopes. That’s one option in a host of spring break–style activities at Boyne Mountain, through April 10. If you can get the family out of the ever-popular Avalanche Bay indoor waterpark, they can sample teen dance parties, wagon rides, bonfires with s’mores, live music and, for the grownups, Michigan beer and wine tastings.

Early birds catch the sunrise—and perhaps scope the endangered Kirtland’s Warbler, the rare piping plover or hundreds of other bird varieties found on the Sunrise Coast Birding Trail, 145 miles of US23 between Oscoda and Mackinaw City. Pass Lake Huron beaches, wineries, trout ponds and more along the way.

Whitefish Point’s Spring Fling is the spot to head for those who like their bird sightings pretty much guaranteed. Experts point out the difference between a red-tailed hawk and golden eagle, teach seminars on topics like identifying songbirds by ear, and more, all along one of Lake Superior’s most scenic coastlines. Book early to secure on-site lodging in the remodeled Whitefish Point Light Station. Bring warm clothes.