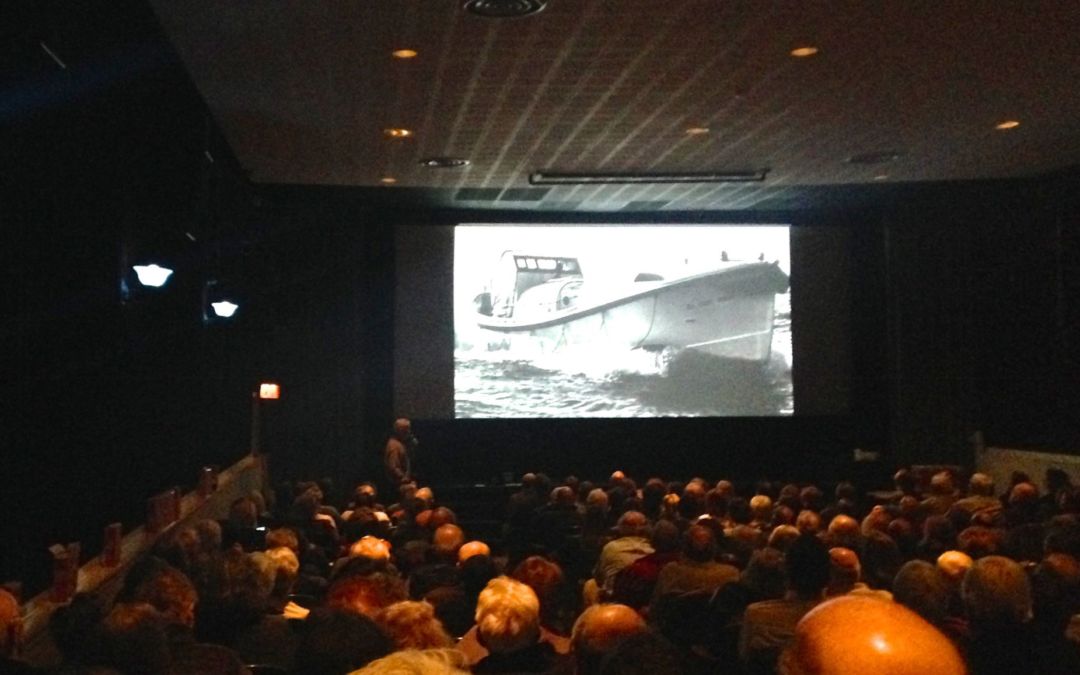 Disney’s The Finest Hours tells the real story of a daring Coast Guard rescue mission in February 1952. The action-thriller film has a connection to Northern Michigan, which is home to the rescue boat used in the movie.

To celebrate that connection, a special Northern Michigan event was held at the opening of the movie at the Bay Theatre in Suttons Bay. George Powell, who restored the boat with his shipwrights, gave a presentation about the project and their efforts. MyNorth’s Marketing Director Rachel North attended the event and shares the story of Powell and his crew.

“We hammered on the hull when we first got the boat and it sounded pretty solid,” said George Powell, boat builder, about the first assessments of the US Coast Guard 36-foot Motor Life Boat (MLB) serial number 36460, a rescue boat featured in The Finest Hours film produced by Disney. “But as the weather warmed up, more and more parts showed more ‘give’—we’d been hammering on ice.”

There are only three operational 36-foot MLBs in their original configuration, meaning that one can start the engines and take them out to sea. The first, the original Coast Guard MLB serial number 36500, used in the rescue, is a museum exhibit in Massachusetts. And the second, serial number 36460, is in Northern Michigan in Suttons Bay, completing its restoration. Another is on the west coast somewhere.

It’s the second time that the 36460 MLB is in the care of Powell and his crew of shipwrights, the Planksters. The initial restoration was halted, while the boat took a bow as one of four movie-set props used in The Finest Hours film. Powell describes the other three as “wrecks,” pieces of boats used for close ups, interior shots and green-screen work. The only water-tight MLB used in The Finest Hours wasn’t sea-worthy until Powell’s team spent more than a year painstakingly restoring it from the ribs out.

Powell shared the story and slides of his restoration of the 36460 with 260+ people at the opening of The Finest Hours at the Bay Theatre in Suttons Bay, a special event benefiting the Inland Seas Education Association. Every seat in the small theater was taken. There were audible gasps as image after image in Powell’s slideshow revealed how the boat had rotted away.

The Planksters were originally hired to restore a guard rail that circled the upper deck. But so much of the boat showed damage, that the guard rail was put off until the craft could be returned to a seaworthy state. Even the upper parts of the rib/frames, the so-called heads were so badly damaged, the team ended up installing more than 30 sister frame heads. With the restoration’s chores mounting, the team realized that the tarp system they were using wasn’t an optimal work area and had a metal building built up around the boat. Under cover, the work moved more quickly, but there was still a great deal to do.

The 36-foot MLB design shows extreme twists and curvatures, both in/out and up/down all along the sheer, where the hull and deck meet. The team had to steam the wood, “cooking” it for more than an hour to bend it. Even hot, the boards had to be bent and twisted by all four members of the team to put things together.

“Jeff Shook, the owner had leased the boat to Disney to use in the film,” Powell says. “So we were working really hard to meet that deadline.” After being used in the movie, the boat came back to Suttons Bay, “somewhat the worse for the wear,” continued Powell. It looked so different, one of Powell’s colleagues said, “I think they sent us the wrong boat?”

As the team looked closer, they realized they were seeing Hollywood magic. Metal plating was used on 36-foot MLBs that were used in seas where there might be ice, to protect the hull from being punctured. Disney had painted epoxy putty onto the hull to mimic the metal plates. The Planksters had to use heat guns to soften the epoxy and scrape it off.

With Disney’s epoxy removed, the team discovered several planks in the hull were split down the middle, or suffered “shake.” Once those were replaced, the team could start working on the guard rail, the original job, after one and half years.

With only painting, electrical and equipping to do, Powell expects that the Northern Michigan 36460 MLB will be ready by summer for its next tour of duty, day tripping on Lake Michigan. Shook plans to loan the working boat to the Michigan Maritime Museum in South Haven this summer for tours of Lake Michigan—so in good weather, you can ride a boat just like the one in The Finest Hours that braved the Atlantic and saved 32 men from certain death in 1952.