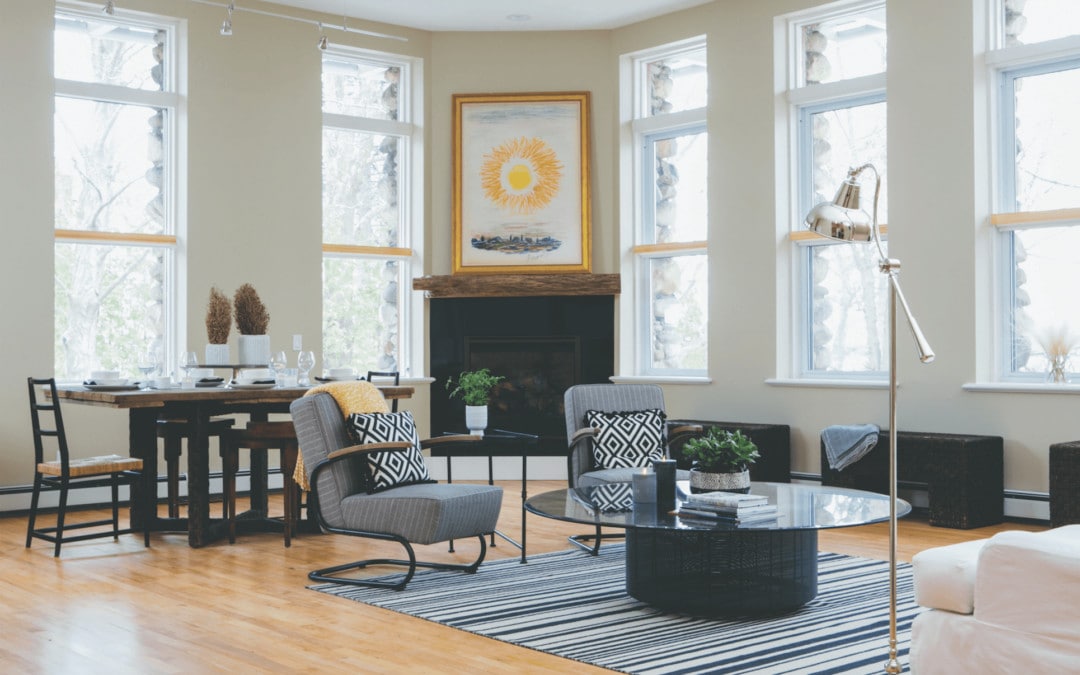 Walking into At Home, a home decor store in downtown Suttons Bay, you’re greeted with colorful layers of fabric, the gleam of metal, and soft tones of distressed wood. Each step forward brings something new to look at. The owners, Peggy Miller and Sarah Peschel, draw their inspiration from the area they call home.

“The water, the woods, the gardens, and greenery all around us … We are often inspired by the unexpected beauty in this area as well, weathered old cottages, farms, and barns that have stood for a hundred years or more,” Sarah says. “There’s so much history, and we aim to celebrate that whenever we can.”

The pair recently helped with the remodeling of the historic Suttons Bay Union School, which was built in 1907 on a hill above Suttons Bay. After being used as a school, the building provided housing for cherry workers and was also a single-family dwelling. By 2004, it sat vacantly and remained so for over a decade until it was purchased and fixed up by Cheryl Hutchinson and her husband Ian Hurlock-Jones.

To get a feel for the remodel, we talked with Sarah about the pieces they chose for the schoolhouse and its interior design. 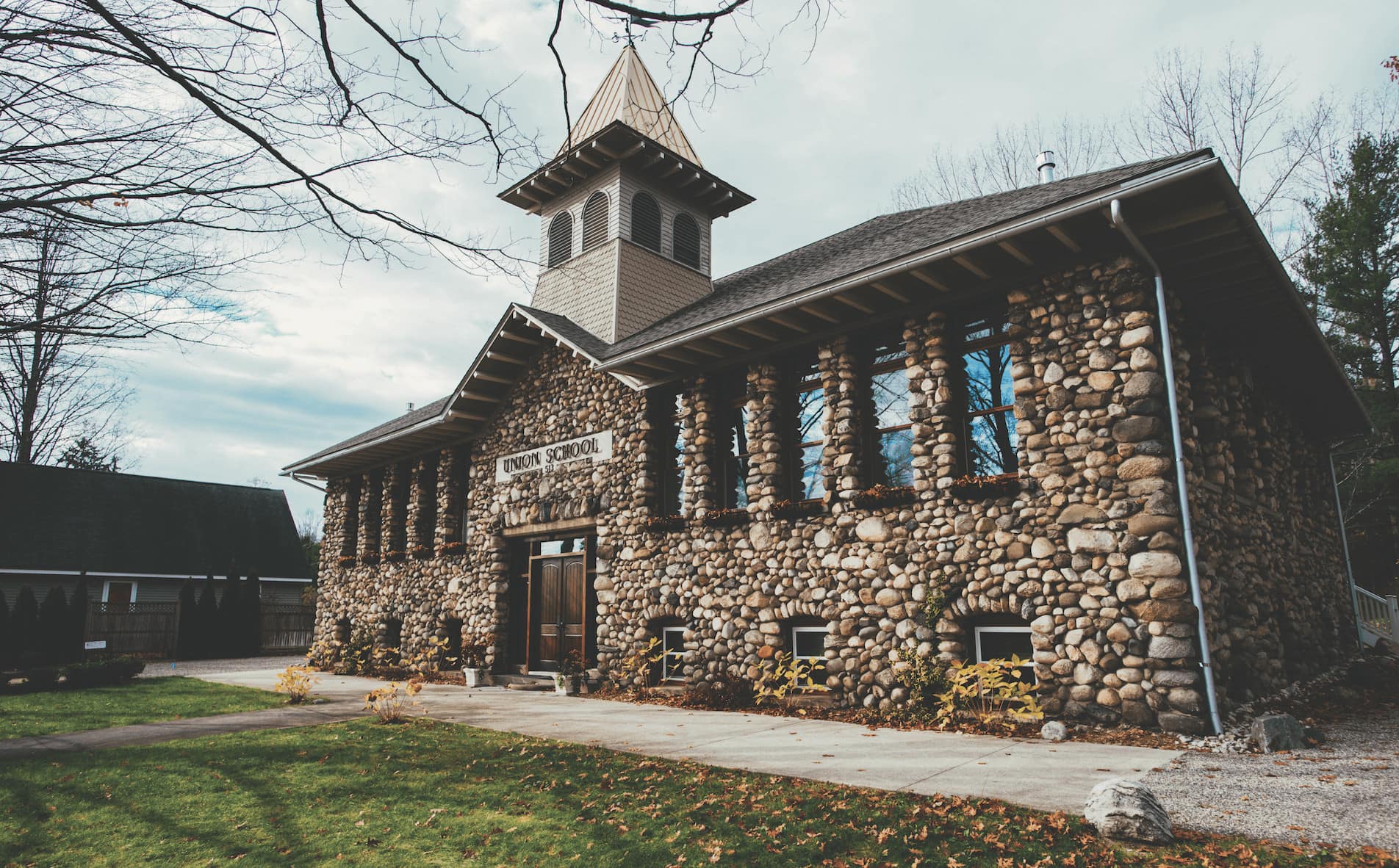 How did you and Peggy help with the renovations of the Union School?

Peggy and I assisted with the interior design element of the renovations. When we were invited on board the construction was complete. All that was needed were some finishing touches.

When we first walked through the Union School we were instantly in love with the high ceilings, the natural light and the original stonework throughout the space. We brought in pieces that we felt would complement those elements and enrich the already amazing story of the place.

To do that, we had to be mindful of scale. Because the ceilings of the Union School are so high, we had to bring in large and unique pieces to break up the whiteness of the walls and add interest. We used two pieces that I think did an exceptional job of this—the large oil pastel drawing of the sun over the mantel in the living/dining area was so reminiscent of early childhood drawings for both Peggy and myself that we felt it belonged in what once was a schoolhouse. Its presence really connected the past to the present and I found myself thinking of studious young children often while I was in that space. (The oil pastel is pictured in the top photograph.) 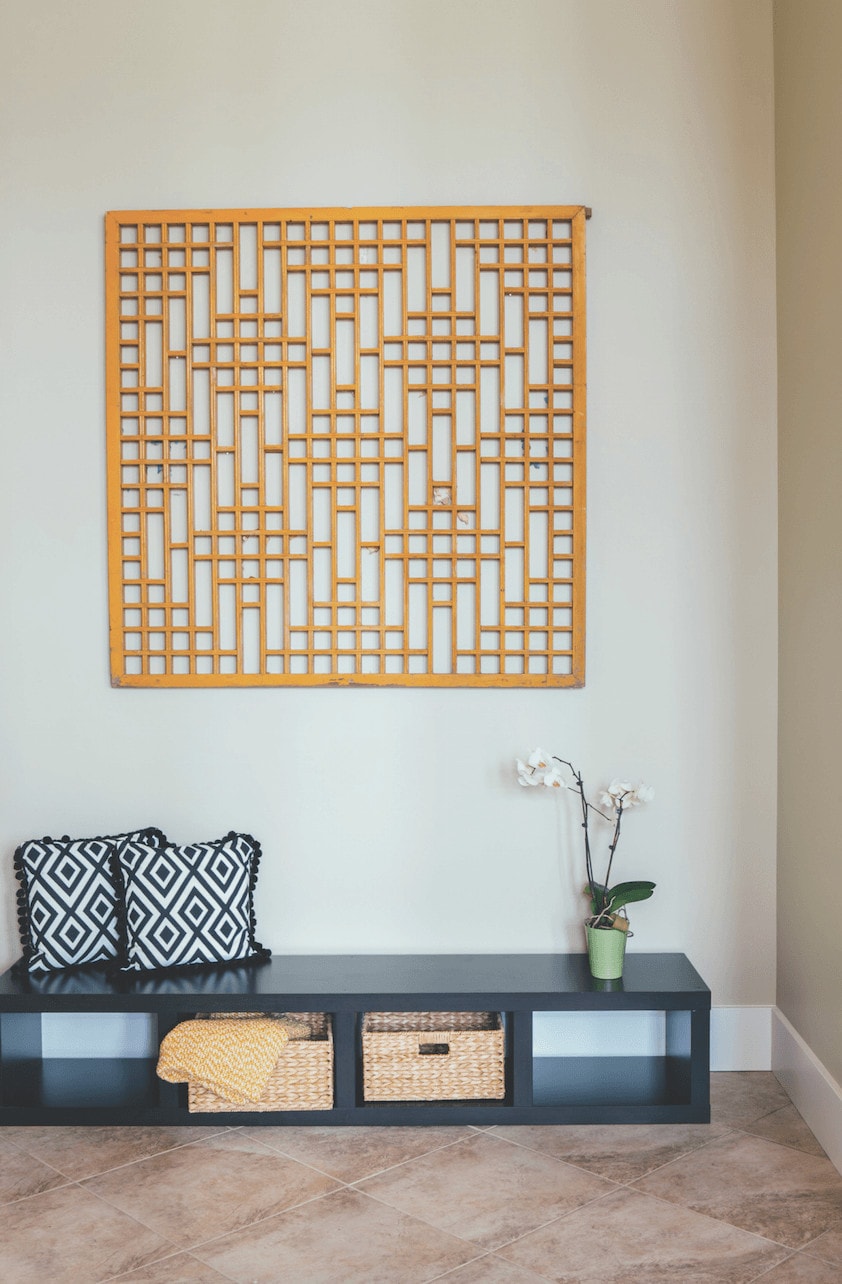 Another piece we used was an antique Chinese Screen (pictured left). It added an interesting architectural element to the space while also evincing a sense of history. Something about that piece with its little remnants of rice paper felt consistent with the schoolhouse vibe as if it were an artifact for student learning rather than an element of décor.

Throughout the rest of the space, we added elements that we felt added warmth and comfort. Since the Union School is now a rental space, we wanted to create a feeling of respite and relaxation as well as interest and history.

We added a large (and heavy) black iron mirror to the master bedroom. Its placement against the rock wall was striking and its reflection brightened up the natural darkness of the stones. We also added white vases and live plants throughout the space and created a dining room table out of reclaimed barn wood.

Each piece that we added we arrived at by weighing the depth of warmth and history it lent to the overall feel of the space. In the end, we felt successful in achieving that objective.

Rustic and modern are at opposite ends of the style spectrum. How do you combine the two?

We are drawn to the juxtaposition of many design elements to create an aesthetic that reflects the personality of our clients. We find that the marriage of the unexpected keeps things interesting, and while rustic and modern may be on the opposite end of the style spectrum, pulling from both extremes allows us to create spaces that have a depth and character unattainable by going wholly one way or the other.