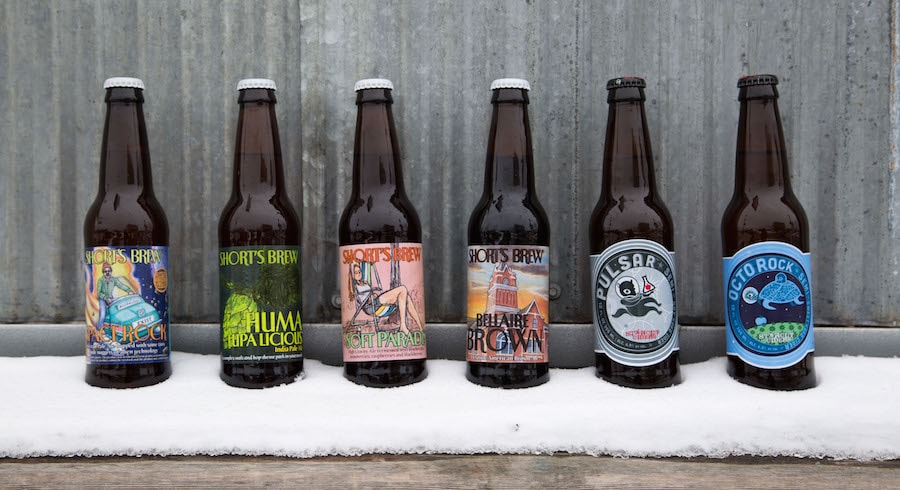 Last month, Short’s Brewing Company of Bellaire announced they would distribute their Northern Michigan beer and Starcut Ciders outside of Michigan.

Short’s decision to begin out-of-state distribution was first announced through a letter posted on social media from founder and CEO Joe Short (read the letter here). Since then, Short’s beer has reached Pennsylvania, and it will be available in Illinois in early March.

We talked with CFO Brian Beckwith about the decision and how things are going so far.

Short’s is still a fairly young brewery. Did you think Short’s would ever be such a big name in the beer industry?

“No, not at all. When we opened in 2004, the intent was to remain a local brewpub only with limited draft distribution. We had no intention of bottling. Our brand gained prominence over the years until we opened our Elk Rapids production brewery in 2009 and began statewide distribution, but even then we thought we’d only distribute to Michigan. But as we’ve confirmed with our recent announcement, the demand for our beer across state lines is incredibly strong!”

I’m sure it wasn’t easy to decide to distribute out of state. What are the main reasons behind the decision?

“It was indeed a very difficult decision. Ultimately we came to the decision that we wanted to continue to grow our business by remaining independently owned, without bringing on additional shareholders. By expanding distribution out of state, we’re able to continue to create jobs in Michigan and bring increased sales revenues into the state, all of which we reinvest into the company. Those things are very important to us, important enough that we decided to open up shipments to other states, something we had never intended on doing, but it’s something that will have a very positive impact on our company, our employees, and our community.”

What are beer lovers saying about this decision?

“The response to this decision has been overwhelmingly positive, even more so than we anticipated. To see the support from both in-state and out-of-state fans has been so great and reaffirms our belief that we’ve made the right decision.”

Why was Pennsylvania chosen as the first location to distribute to?

“Ha, we get this question a lot because geographically it might not appear to make sense. Over the years, at different festivals and conferences, we established a relationship with Bella Vista, our new distributor there. They would check in with us periodically to see if we were ever interested in shipping outside of Michigan, which obviously at the time, we weren’t. So when we made the decision to go out of state they were one of the first phone calls we made and they were on board right away, so it was a really easy thing to set up and as a result, eastern Pennsylvania is lucky enough to be the first to receive Short’s beer outside of Michigan. We have a large team of people going to Philly for Craft Brewers’ Conference in May, so we’re really excited to get to meet some of our Pennsylvania Short’s fans when we visit!”

Illinois is next on the distribution list. Will a third state be announced soon?