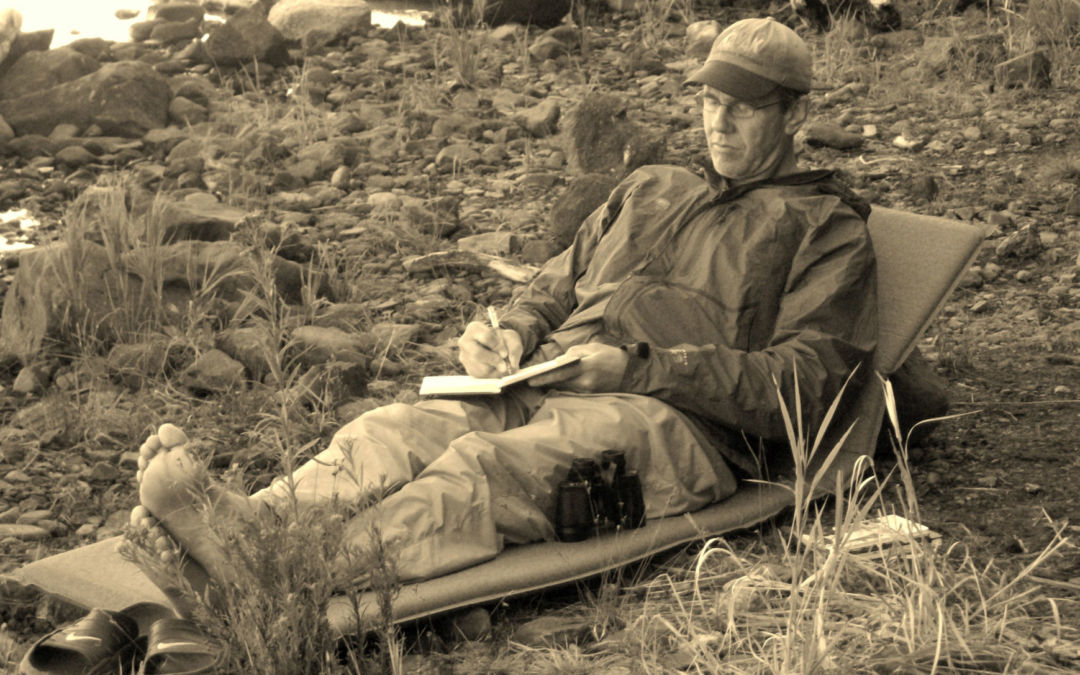 NORTHERN MICHIGAN: After years of living “the chase,” Stewert James settled in Northern Michigan, drawn by the environment and a small lakeside town where he can live a purposefully minimalistic life. It’s a place where he has been embraced by a community and found inspiration in an ever-changing landscape.

Stewert is a retired RN with a BSN and a Master’s in Health Services Administration. In his former life, he also taught college for 10 years, and worked as an administrator, business owner, and CEO.

Although his career required him to travel around the country, he is no stranger to the Great Lakes and Michigan. His new community has welcomed him, he said, “making me feel more warm and more comfortable than any place I have ever been.”

Stewert immerses himself in the landscape, even finding inspiration in the darkest months. Where many find the long northern winters depressing, Stewert says he finds them useful and refreshing—what he refers to as “the writing season.”

When he’s not writing, Stewert can be found hiking, biking, fishing, birding, and lifting weights. He spends most of his time away from a television set and does not own a smartphone.

Stewert gives back to the community as well, as a volunteer at Brother Dan’s Food Pantry and Crooked Tree Arts Center. He also paints and draws when the mood hits and has had works displayed locally.

Stewert writes to a long-ago-established poetry site, tomspoetry.com, for his life’s recovery, and enjoys blogging to his Stewert James website for more pragmatic ideas.

Locally, people refer to him as a Renaissance man, says Stewert. “I just like knowing I live in the moment and enjoy my life more than most at a young age. I take no part in “the chase” anymore, and am very happy with the minimums. Less stress and less drama!”

He is the father of three “very gifted children” and says he is delighted that they all have found equally wonderful and gifted partners.

He is the author of the fast-paced Super PAC trilogy, two collections of short stories, as well as  Writing with Hemingway at City Park Grill.

Did you ever dream you would become a writer?

I’ve written in some form or fashion since Mrs. Daniels, my 5th grade teacher, said I was the best creative writer she’s ever had. But, yes, I was one of those who always wanted to write the next great American novel.

How do you write? What is your process?

It depends on what I’m writing. If it’s poetry, I write purely from emotion. If it’s a short story, I generally have a character or situation, then quickly pen the draft. With a novel, it’s a title or storyline that, in my mind, calls for multiple characters and I begin to write paragraphs and pages creating the plot. It helps if I have an ending already in mind—I work toward it.

Who are your favorite authors?

There are so many, and most are probably outdated to many. Henry James, Edgar Allen Poe, Robert Frost, Robert Service, Tom Clancy, Robert Parker, Elmore Leonard, and Ernest Hemingway. Then there are the constants: Emerson, Thoreau, and Shakespeare. They get to the inner me.

What authors have inspired you?

Robert Service and Robert Frost for poetry. Hemingway and Poe for short stories. James, Clancy, Parker, and Leonard for novels.

What advice do you have for young writers?

Find time to write and don’t worry about being perfect or structured. That takes too much energy and may hamper creativity.

What was your favorite book as a child?

Anything by James Fenimore Cooper.

Your Super PAC novels delve into some dark territory, some of it we might not want to know about (ignorance is bliss!). What was the catalyst to write these? What kind of research went into these books and how much is fact or fiction?

The catalyst was the catharsis I needed for a new life. I was lost in a world that I was too naïve to be a part of, and too nice to take advantage of. My world is ethereal and all-for-one. The world of politics, at least now, is all for ONE, and very shortsighted. The research was based on inside knowledge and an inner sanctum of wanting to educate people, and most of the politics are factual with nuances based on researched facts and known assumptions within the laws governing PAC’s.

Authors have been writing under pen names forever and for a variety of reasons – they don’t want anyone to know they’re writing books, they want to cross genres, switch publishers or maybe they just hate their name. Why have you decided to adopt a pen name?

I wanted a name that was different than mine and had a classic tone to it, and many writers I researched had pseudonyms. I do write different genres and “things” where I use my real name, e.g., articles, poetry, etc. Besides, my name is always butchered when people try to read it. Funny how many people ask immediately when they find out I’m a writer, “What’s your nom de plume?”

How does your latest book of short stories, Writing with Hemingway at City Park Grill, differ from your Super PAC tales? How are they similar?

The only real similarities are the use of local haunts and local characters. Beyond that, there are some deep sentiments about the consumerism in our world, but that would take too long to explain.

I know that writers craft words in any number of places—basement offices, coffee shops, even in a closet. Tell us how City Park Grill, a Petoskey, Michigan, institution played a role in your writing.

It was a legendary Hemingway haunt, but beyond that, it brings classic architecture and a nostalgic aura in a Chautauqua community that dates back to the post-Civil War era. And maybe more importantly, before that, the area was—and still is—a home to Native Americans who used Little Traverse Bay for thousands of years as a place of gathering and restoration. Maybe now you can get a feel for why Emerson and Thoreau are as important to me as Hemingway and Parker. The writing is all connected through threads. I hope that makes sense to you.

And of course we’d be remiss not to ask you about Hemingway’s role as well.

Hemingway used local characters and places for his stories. It feels right to write people and places you know. Why invent when reality is before you?

What writing projects do you have planned next?

I have a new novel with the working title The Penny. It’s about a  couple who lived, loved, and survived the times of WWII, Korea and Vietnam, based on a woman named Penny. The story looks at challenges on the home front, the war front, families and friends throughout a lifespan.

I have a group working on developing a small indie press company, Mitchell Street Press, and another group I’ve formed to begin the Little Traverse Bay Literary Guild. Both are in the working phases of development but do exist with people, work, and agendas.