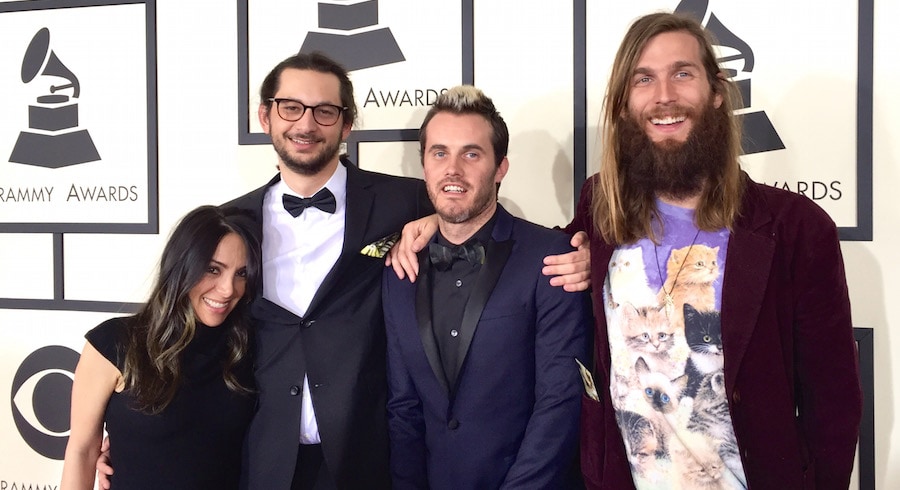 Nathan Scherrer, a 2007 graduate of Northport Public School, is quickly becoming a well-known name in the Los Angeles video industry. Four years ago, the Northport native (pictured third from left above) moved from the small village on the Great Lakes shoreline to the Hollywood hub on the Pacific. Since then, he’s been working his way up from intern to Grammy-nominated video producer.

Nathan was nominated for two Grammys for Best Video Award for Pharrell’s “Freedom” and Dead Weather’s “I Feel Love (Every Million Miles).” We talked with Nathan about his Grammy experience and how he got there.

What was it like moving from a small town to LA?

“Not as crazy as it probably sounds. It’s a small industry so once I broke in, it felt like a second home quite quickly. I love Northport, and I love LA. Both have done wonders for me. I felt Northport gave me freedom to learn and grow in my own way and LA and the entertainment industry has done the same.”

You moved away from Northport in February 2012, and now you’re at the Grammys. Clearly you’ve got a lot of determination and talent. What advice would you give to people who are still pursuing their dreams?

“Work like it’s to save your life. Think big picture. Learn to accept experience and knowledge as a form of currency. No one is going to pay you to do something you haven’t proven you can do.”

How did you feel when you found out you’d been nominated for two Grammys?

“My reaction probably isn’t suitable for a magazine,” he laughs. “But I was very excited and it made for a good Monday. I was happy to be nominated alongside a few of my friends. And it helped me with Christmas shopping, too (I bought tickets for my mom, dad, and sister to accompany me to the Grammys for their Christmas presents).”

How did it feel to walk the red carpet Monday night?

“It was nice to be able to walk down with my dad and a few of my friends that were fellow nominees (Candice Dragonas, Ian Schwartz, and Cooper Roberts).” Pictured above.

What were some other highlights from Grammy night?

“The performances. Seeing Kendrick, Justin, Wes (Diplo), Sonny (Skrillex), Adele, Gaga, Gary Clark Jr., etc. all at one event was special and felt very one of kind. I’ve worked with a handful of those guys, but to see them do their thing on stage was new for me and good to see.”

Even though Taylor Swift took home the Best Video Award, how does it feel to know your work and passion are being recognized on a national stage?

“It’s hard to put into words. It feels smaller out here, but then you also know it’s huge so it’s a bit crazy. I don’t do what I do for recognition. It actually makes me feel a little uncomfortable, to be honest, but I’m super grateful and appreciative for all the support from everyone back home and to the Academy for considering me, Candice, Ian, Cooper, and Paul this year. It was an amazing experience and a whirlwind of emotions, but it’s in no way an end goal. There’s a lot more I want to accomplish so it’s been nice the last couple days being back alone in my office working toward those next goals.”