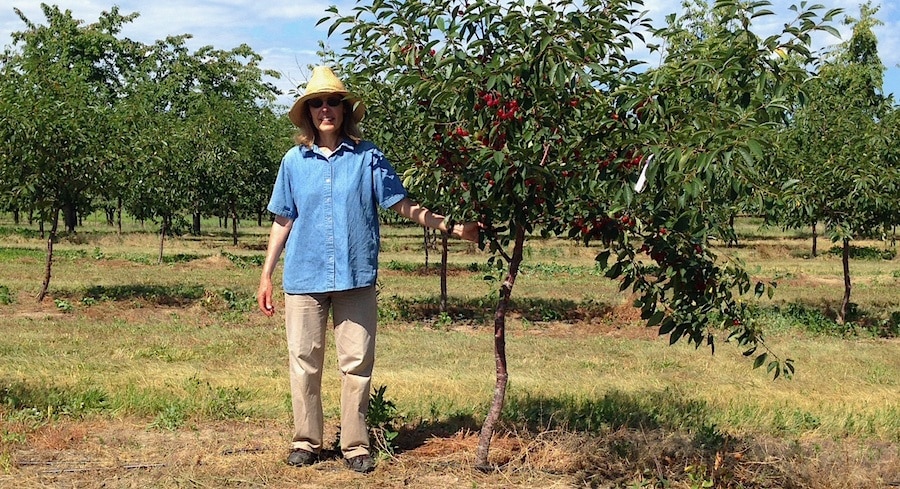 Each year, cherry farmers battle against the weather and diseases to keep their crops alive. Dr. Amy Iezzoni, a plant breeding and genetics professor at Michigan State University, is working to make their job a little easier. As February is National Cherry Month, we want to take a moment to highlight Amy’s impact on Northern Michigan cherries.

Amy has been working with tart cherries since the 1980s. She’s traveled to the former Yugoslavia, Bulgaria, Romania, Poland, and Hungary to research the fruit and collect pollen, seed, and budwood to bring back to the United States.

“Tart cherries aren’t native to the United States, and it’s hard to breed a crop when there’s no diversity available,” Amy says. “I went to get germplasm (the basic genetic material of a plant).”

While in Hungary, Amy was introduced to Újfehértói Fürtös. For pronunciation sake, the cherry was renamed Balaton after Lake Balaton in Hungary.

Balaton plantings began in the United States in 1994 and are now commonly found at farmers markets and in wine.

“Balaton doesn’t yield as much as Montmorency so production is limited, but its fruit type is different from Montmorency. Its fruit is firmer and dark purple-red with more plum-type flavors compared to the brilliant scarlet red Montmorency,” Amy says. “The goal with releasing Balaton was to enable the development of different products with cherries without taking away from the Montmorency cherry market.”

Having diverse germplasm is important because it allows for new types of cherries to be bred. These new cherries can be bred to be resistant to diseases such as cherry leaf spot. Last year, in particular, was a terrible year for this disease, Amy says.

“The fungus is in the soil of many orchards and the current cherry rootstock is very susceptible,” Amy says. “It causes tree death, and it’s impossible to replant that site once it’s been infected because the new cherry trees will eventually just die too.”

However, thanks to the germplasm Amy brought back in the 80s, she believes she and a plant pathology colleague, Dr. Ray Hammerschmidt, have found a source of resistance to Armillaria due to the roots naturally possessing antifungal compounds.

“We have it out at one trial site, and we’re putting in more sites this spring so we’ll see,” she says.

The trials, which take about 5 years to evaluate Armillaria resistance, will be on Old Mission Peninsula and in Benzie County, Leelanau County, and Oceania County.

“The cherry industry has huge challenges, and we’re doing what we can,” Amy says. “It just takes time because breeding is a long process. My goal is to do what I can to help producers have a bright, profitable future growing cherries here.”