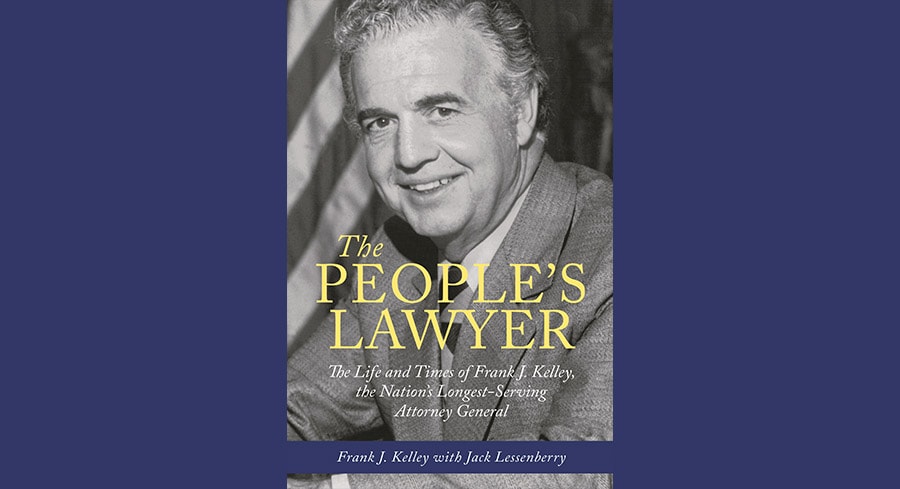 Frank Kelley, an Alpena resident who hold’s the record for longest-serving state attorney general in the United States, recently published the memoir, The People’s Lawyer. Traverse, Northern Michigan’s Magazine contributor Emily Bingham tells us about the Northern Michigan book and the man behind it.

This article was originally published in the February 2016 issue of Traverse, Northern Michigan’s Magazine.

Frank Kelley’s rich life has spanned nearly a century and bridged two very different Michigan experiences: from Detroit, where he was born in 1924 and subsequently raised, to small-town Alpena, where he moved as a young man to practice law and build his own identity away from the city. He is known for holding the record for longest-serving state attorney general in the United States—having held office in Michigan for 37 years—but there’s so much more to his story, which has now been captured in his book The People’s Lawyer (Wayne State University Press, 2015).

“He’s an amazing guy—he had a vision,” says co-author and longtime friend Jack Lessenberry, who is head of the journalism faculty at Wayne State University in Detroit. “He [has] had a fascinating life in a fascinating state at a fascinating time in history.”

The book, which Lessenberry describes as part legal history, part memoir, was recently named a notable book of the year—another superlative for Kelley, who celebrated his 91st birthday in December. Available at area book sellers and via wsupress.wayne.edu