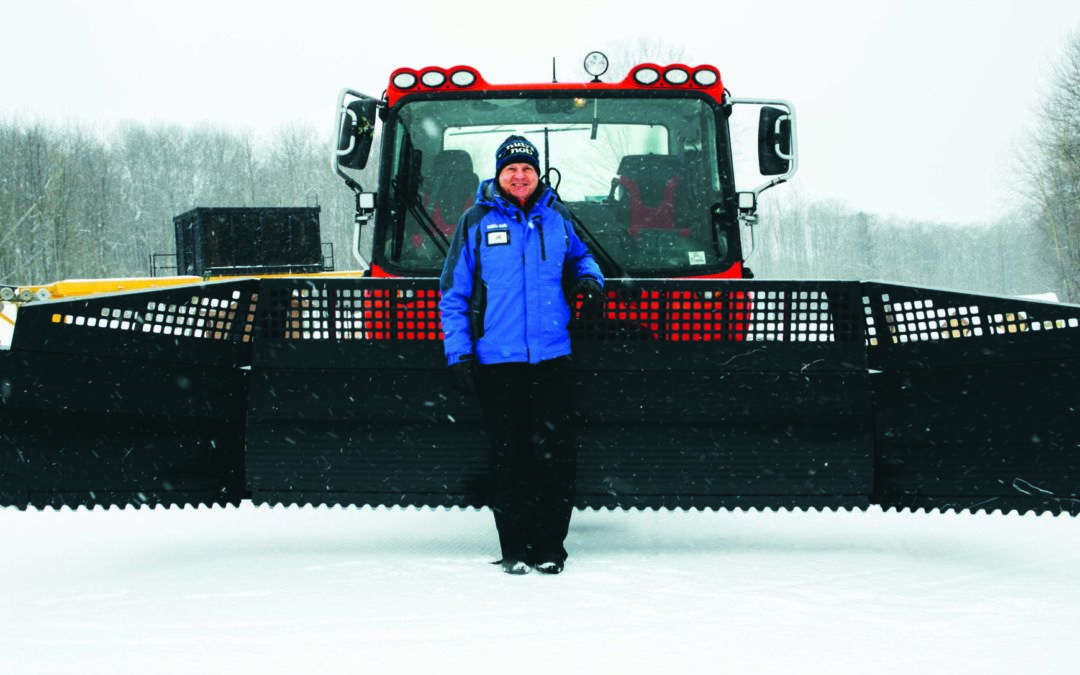 General Manager of Nub’s Nob, Jim Bartlett, is a guy who has earned a nationwide reputation as a leader and champion of the old-school-cool Harbor Springs ski resort. But that’s not the reason Jim Bartlett is a person whose story is worth telling.

Kate Bassett gives us a glimpse into the life of Jim Bartlett in this feature originally published in the February 2016 issue of Traverse, Northern Michigan’s Magazine.

This morning, when I arrived at Nub’s Nob Ski Area to spend the day job shadowing general manager Jim Bartlett (aka “JB”), I went straight to his office.

Which, of course, was empty.

For a girl who grew up as part of a downstate, die-hard, winter weekend warrior family; a girl who met her husband at Nub’s Nob; a girl who spends endless hours with her three children on these slopes … I should have known better. The idea of running this 248-acre Northern Michigan ski gem from behind a desk would be as foreign to JB as, well, celebrating a thaw in mid-January.

Instead, I find him eating a chocolate chip cookie in the cafeteria, chatting it up with some helmet-haired skiers. He’s wearing his signature Nub’s Nob look—a button down shirt and black Nub’s fleece vest—and it gets me thinking. This image: filtered sunlight in the cafeteria, with all its weird, happy noises (stomping ski boots, coats zipping, trays clattering), and Bartlett waving me over without missing a beat of his current conversation, it’s like getting to experience moments from all four decades of my life at once.

Bartlett is such a staple part of this place, where he’s worked since 1977. While Nub’s as a physical entity is woven into so many folks’ stories, the magic of this family-owned ski hill doesn’t come only from its panoramic views of Little Traverse Bay and the Pleasantview Valley. It comes from people like JB, a guy who has earned a nationwide reputation as a leader and champion of the old-school-cool ski resort.

In his tenure at Nub’s Nob, first as area manager and then as general manager, following the death of his mentor, legendary snow maker Jim Dilworth, Bartlett has turned 14 runs into 53, four chairlifts into nine, 15 patented snowmaking guns into 292, plus added a Pintail Peak Lodge, new locker room and so much more. The most impressive part? He’s done it without sacrificing Nub’s signature vibe, best described as a home away from home.

Bartlett’s an expert in snow making techniques. A public relations superstar. A guy who understands the importance of blending tradition with new technology. He’s even learned how to make peace with the Midwest’s occasionally uncooperative winter weather. In short, he’s like a walking, talking master’s class of how to run a resort that’s focused 100 percent on skiing and riding.

Yeah. A guy like that can’t spend more than a handful of minutes behind a desk without getting antsy.

I join Jim as he chats with a few more skiers who are munching on donuts or pancakes or warming their hands with a hot cup of coffee. He introduces me and launches into conversations ranging from how great current conditions are to what’s happening in downtown Harbor Springs. In addition to his “real” job, Bartlett also serves on a number of community boards and local government commissions.

By the time we finally walk back toward his office (stopping to high-five a couple of kids and sneak another cookie from the cafeteria), I’m already racking my brain about how to tell his story.

Because yes, his résumé is impressive. And yes, it’s really amazing how passionate he is about assisting “mom and pop” ski areas like Charlevoix’s Mt. McSauba. And yes, Nub’s Nob has won countless awards under his watchful eye … But that’s not the reason Jim Bartlett is a person whose story is worth telling.

It’s something deeper, a success made from small, human moments. Like how he raises a glass in honor of Dilworth, his mentor and friend, before the start of each ski season—at the top of Nub’s 427 vertical feet when possible. Or how, when he heard over the resort’s radio system a local kid was sprawled in the terrain park with a suspected broken leg, he hopped on a snowmobile and raced to the scene, staying until ski patrol whisked that 11-year-old boy away (I can attest to this kindness personally, because I am the kid’s mom).

JB’s story is about understanding how to run a community that happens to double as a ski hill.

Bartlett, the oldest of eight children, was probably born a leader. Skiing, however, wasn’t so woven into his genes. On happenstance, he joined a ski club and learned the local resort was in need of ski patrol candidates. Ski patrollers, he notes, got free lift tickets.

“I didn’t have a clue what I was getting into. Free tickets. That’s all I heard,” he says with a smile, motioning toward a grainy photo of some sweet 70s ski patrol outfits, complete with the era’s signature flowing locks and cool ’staches.

We’re back in his wood-paneled office. Outside, bright blue skies reflect against corduroy snow. We sit quietly for a minute, watching skiers and snowboarders zip down Sno Pro, a wide run created and named for Dilworth in 1987, the year Bartlett became general manager.

“By 1976, I was a pro-patroller, going to school only in the spring and fall terms. I guess you could say I was hooked,” he says, explaining he moved to Big Sky, Montana, to join the patrol staff there but came back to Michigan in 1977 when Walter and Alfred Fisher bought Nub’s Nob from original owner Dorie Sarns, who opened the resort with husband Nub in 1958. Dilworth was named general manager, and he talked JB into coming on as area manager.

“As much as I loved the mountains, I missed the water. Plus, Jim was the best. I wanted to work with and learn from him. I didn’t realize that I’d spend the next 38 years here, but I never doubt I made the right choice. This place is a family, and I’m lucky to be a part of it.”

Like any proud papa, Bartlett is quick to turn the attention away from himself.

“We have the best crew anywhere. Marty Moore, area manager, is one of the best in the business. Our snowmakers have won countless awards. Our groomers have been ranked in the top five in the nation for their expertise. We have hands-down the greatest food anywhere; I mean, I eat here every day, and I never get tired of it. Everybody, from the lift operators to our front desk staff, they all buy into our mission. It’s always been really important to me to have our customers and employees know we focus on quality, we treat each other like family, and we want to work hard and feel good about it.”

In addition to having an incredibly low turnover rate—especially for this industry—Bartlett said the heart of Nub’s Nob beats because of the Fisher family, and in particular, its patriarch, Walter.

“So much of our success can be attributed to Walter. I am who I am today because of his encouragement every step of the way. He makes me a better manager by always looking at the big picture. Walter is one of the best guys I’ve ever known; he has a strong sense of purpose and is so community minded. He’s always willing to put money back into people and equipment. When Super Pipes were a huge thing, he said, ‘Okay, let’s build one, but let’s make sure we do it right.’ And it ended up being voted one of the best pipes east of the Rockies. When we decided to turn that area into a race arena, Walter just patted me on the back and said, ‘Okay. Go for it.’ He believes in this place and in the people who run it. That matters.”

Our conversation gets interrupted (for maybe the fourth time) by a red-cheeked lift operator who pops in to give a quick report.

“The longer we stay in here, the more that’s going to happen,” Bartlett says, laughing.

“We’ve literally never had a staff meeting. I make rounds throughout the day, and people know my door is always open. It can be time-consuming, but it keeps communication flowing and it’s a great way for us to resolve any issues in the moment.”

It makes sense this is the way Bartlett prefers to run Nub’s Nob. He admits he’s “never read a business book” and learned how to be in charge of what, in many ways, is like a mini-city, by starting from the ground up.

He’s cleaned toilets, made snow, groomed snow, run chairlifts. He clears trays in the cafeteria. He says his management style was “learned by wandering.”

“In life,” he says, “you choose how you want to treat people. I want to interact. That’s why I’m on the move so much.”

Which is also why, after a half-hour in the office, Bartlett is suddenly on his feet, coat in hand. “Let’s go,” he says, tossing me my hat. “We’ll buzz through rentals and then hop on a snowmobile.”

As I rush to catch up, I ask Bartlett if he ever gets tired of doing the same thing day in and day out for almost 40 years.

“You’re kidding, right? That’s the beauty of this business. No two seasons are ever the same. Heck, no two days are ever the same. This job is never boring. We have more fiber optic cable here than the entire city of Harbor Springs. We have our own water system. We are our own micro-economy, and yet, we play an important role in the bigger economic health of Northern Michigan. That’s something we take seriously. There are so many moving pieces in making a ski resort run well, particularly in a place that relies heavily on snowmaking.”

For the next two hours, we whisk by snowmobile from spot to spot, visiting with the kitchen staff on Pintail Peak, checking on lift operators, and talking about plans for the future. At one point, Bartlett pulls off to a well-tracked glade run and tells me about how often he sees my boys ripping through it.

“I love that,” he says. “I love how skiing is something a whole family can experience together.”

It chokes me up a little, knowing as I do, Bartlett’s retirement is somewhere on the not-so-distant horizon. I ask him as we cruise down Sno Pro how he can ever think of leaving.

He points to Ben Doornbos, assistant area manager. Doornbos is a young family guy, a little shy and a lot kind.

“It’s okay to acknowledge the time will come when this job should go to somebody younger. The important thing for me was to find somebody from within our culture. Somebody who wanted to grow into this role over time. Someone who has a good heart. That was most important,” Bartlett says. “I’ve gotten to watch people who started coming here in kindergarten grow up and bring their own children here. That’s a pretty cool thing. Nub’s Nob is a family. It’s a community. So long as that doesn’t change, I’ll feel like I’ve done my job.”