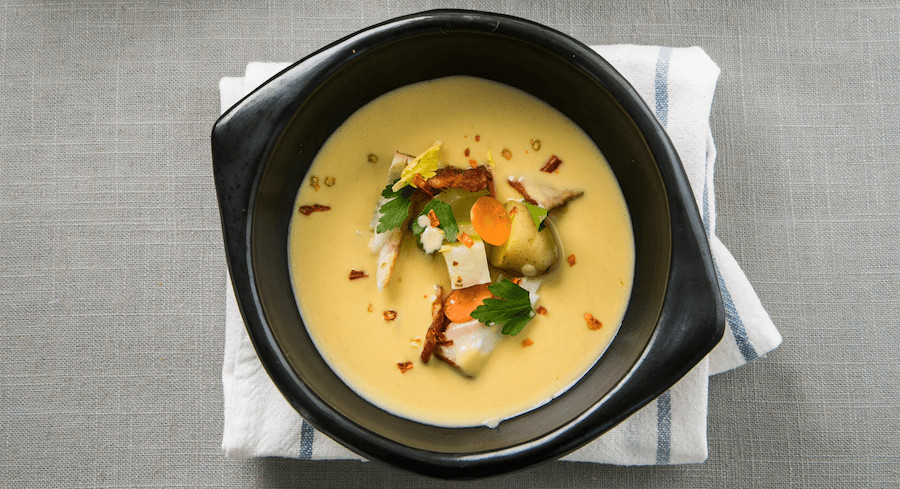 During winter, a warm bowl of soup is inherently comforting. You’ve got the classics down: chicken noodle, beef and barley, tomato, and potato. Mix up your soup repertoire with this smoked whitefish chowder recipe. With a heartier protein and vegetable garnishes, it stands alone as a meal.

This smoked whitefish chowder recipe was featured in “Savant of Winter Soups,” which was originally published in the February 2013 issue of Traverse, Northern Michigan’s Magazine. The recipe was shared by Chef Chris Dettmer of American Spoon Café in Petoskey.

Add the oil, crushed red pepper, and bacon and cook over medium flame until the bacon starts to render its fat. Add the celery, celery root, carrot, potato, and onion. Season with a pinch of salt and cook covered for 15 minutes. Add the wine and cook until reduced by half. Add the smoked fish, cream, and milk. Bring to a boil then simmer for 30 minutes. Place soup in blender and process till smooth. Pass the soup through a fine mesh strainer and season with lemon juice and salt.

Place the diced potato and celery root in a pot of salted water and simmer till tender. Divide all finish ingredients into the bowls. Heat the soup and serve.