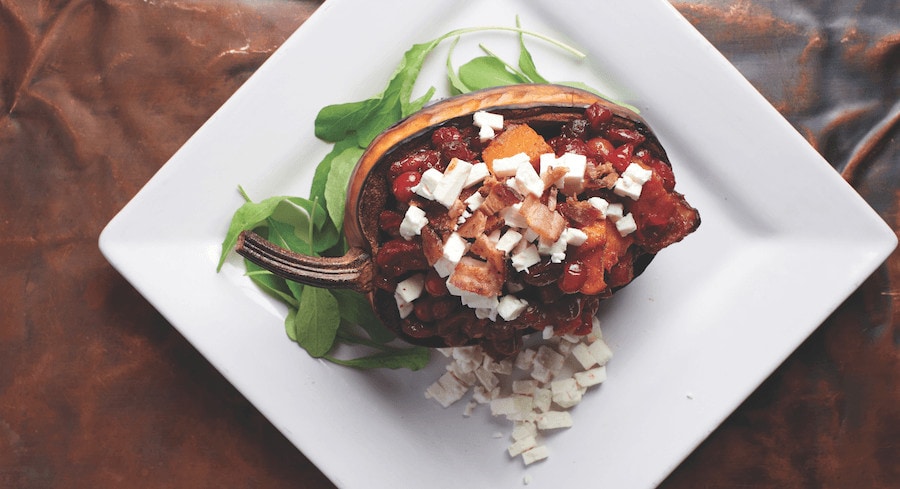 What’s a winter weekend morning (or evening for that matter) without bacon? Not a weekend we want to consider, that’s for sure. We asked the bacon experts at Burritt’s Fresh Market in Traverse City to share their love and offer up bacon recipes for this most comforting of all comfort food—for any day of the week.

A mix of lore and historical documentation suggests that the origin of “bring home the bacon” goes back to the 1100s A.D., in Dunmow, England, when a tradition began. If a man swore an oath before his church congregation to not quarrel with his wife for a year and a day, the pastor would give him a slab of bacon. Still today, this tradition makes clear sense to us, because, as everybody knows, the presence of bacon, its scent filling the kitchen and drifting throughout the home, brings peace and harmony. 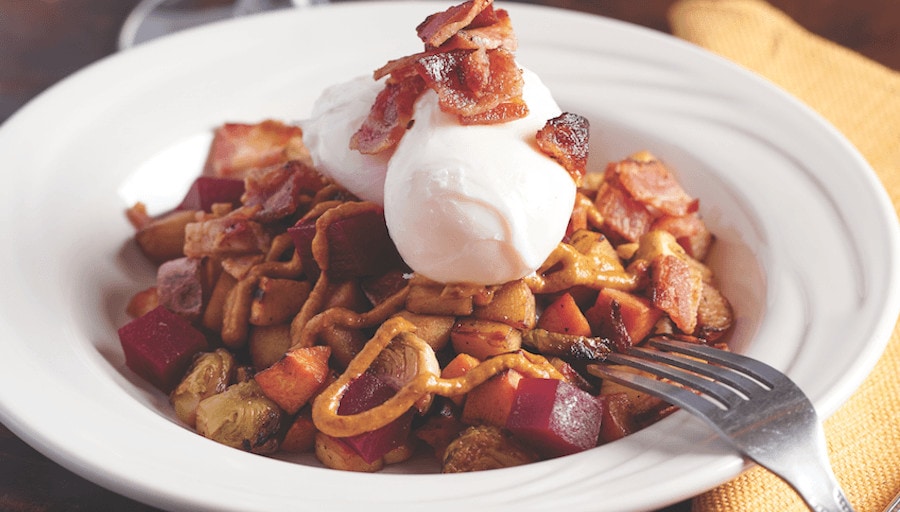 “There are a lot of emotions wrapped into bacon,” confirms Jake Kaberle, general manager and partner at Burritt’s Fresh Market, in Traverse City. “There’s a tradition to bacon. We all have bacon when we know our families will be home, and we want the house to smell fantastic. It’s the day-off treat, for a Saturday or a Sunday or a holiday, when you have time to prepare it.”

But Kaberle is careful to not box bacon in, not limit its possibilities. “People refer to ‘staple food,’ well, bacon is a comfort staple,” he says. The implication: we feel bacon is essential for our souls, not just our taste buds. “And you can find applications for bacon through the entire meal.” Case in point is the dessert with candied bacon the Burritt’s team made for this story. 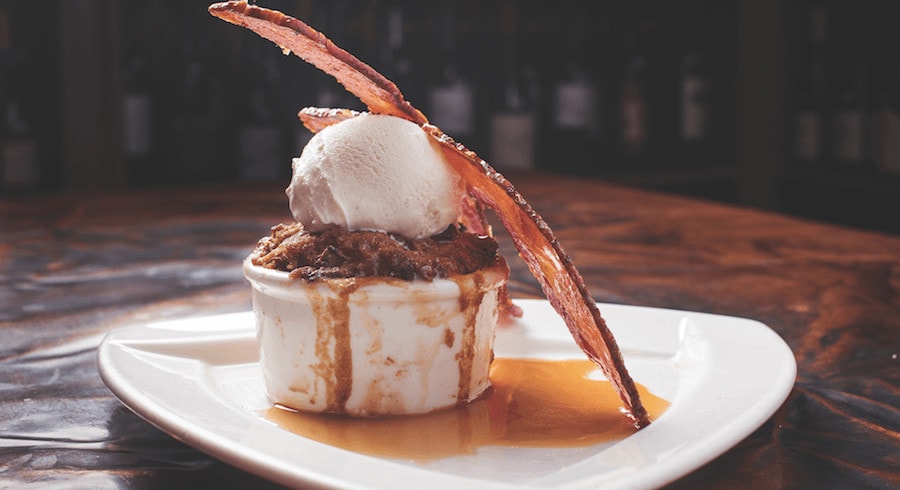 Creating bacon is trickier than it appears. You begin with a brine solution, of which there are hundreds of recipes. To achieve both sweet and salty, a maple curing solution is the go-to. To bring heat, Sriracha-based cures are in vogue, Kaberle says. Either way, the smoke master fills a syringe with the cure of choice and injects the meat in several places, then immerses the pork in brine, where it soaks a while before finishing in the smokehouse.

“Bacon is par-cooked, so not raw, but not finished either, and a lot of food safety is involved,” Kaberle explains. That’s one reason there are far fewer bacon makers now than a few years ago. The Department of Agriculture recently required new reporting requirements for commercial bacon makers, and many small smokers left the business. 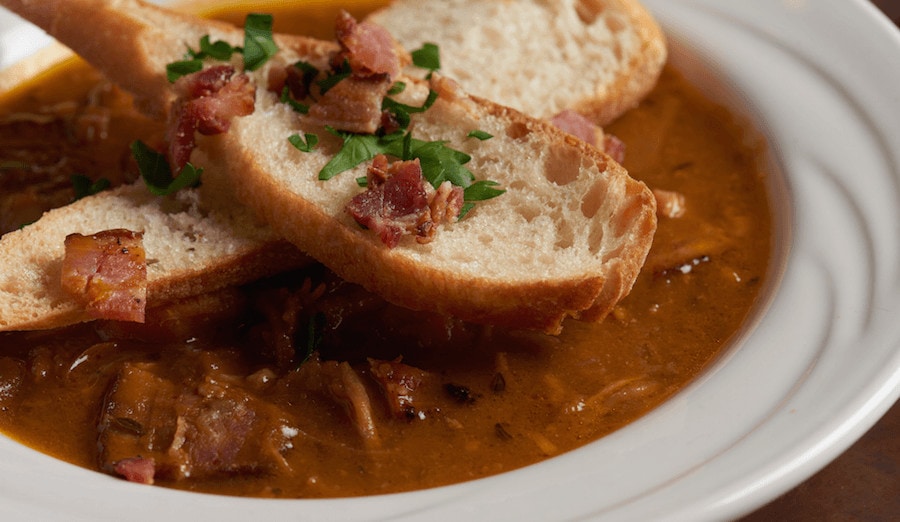 Over the centuries (food historians say the earliest evidence of bacon goes back to 1500 B.C. China) bacon makers have experimented on the outside of the meat too: bacon encrusted with nuts or peppercorn or pea meal. They’ve varied the meat too, the most common alternative being Canadian bacon, which is pork loin, not pork belly. But there’s also lamb bacon, duck bacon, beef bacon and more. Kaberle’s advice: experiment, see what you like.

“Bacon is versatile,” Kaberle says. “People like it for its richness, its fat, its saltiness. It plays well with others.” Some experimentation can be elevated, like the recipes that Kaberle and his crew served up for this article, but other bacon ideas are deliciously simple. Two that come instantly to Kaberle’s mind: Dice up some bacon and mix it in about a 10 to 1 ratio with hamburger and pan-fry the patties. Or, slice a pork tenderloin into medallions and wrap a slice of bacon around the outside; pin it together with a rosemary sprig instead of a toothpick, and broil. Say hello to easy bacon goodness. 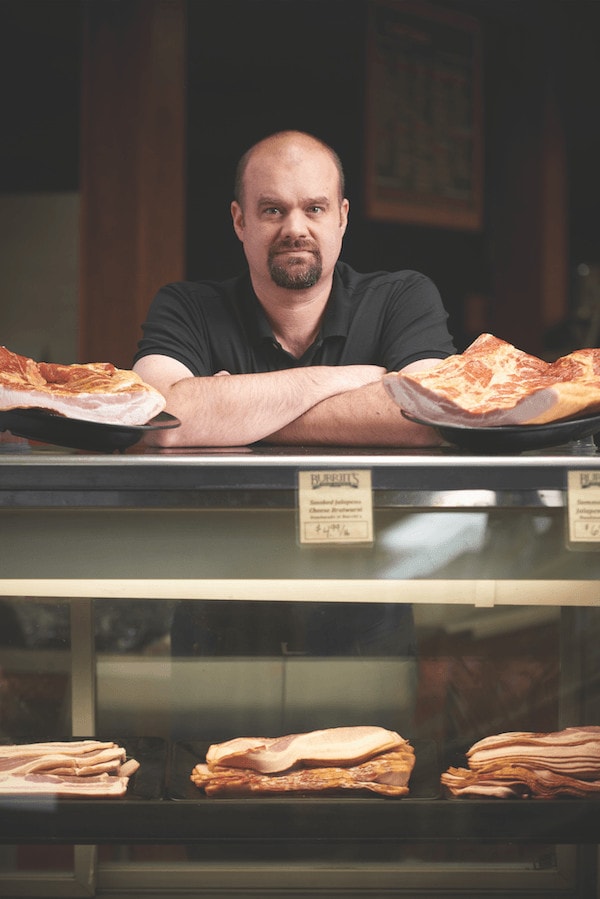 Jake Kaberle has spent nearly his entire life in the food biz, beginning as a young boy when his dad was a partner in a restaurant called The Wharf, halfway between Traverse City and Suttons Bay. But in his late 30s, after 14 years as a manager at Boone’s Long Lake Inn, he broke away, starting a computer tech service company with a friend. That diversion, however, lasted only a few months, because when longtime Boone’s customer Ken Burritt, founder of Burritt’s Fresh Market, learned Kaberle had left the food industry, he asked Kaberle to grab a coffee together. Burritt explained that he could not abide watching Kaberle leave an industry that he seemed so born to, and Burritt offered Kaberle the job of general manager of one of the North’s premier food and wine emporiums. Now, four years in, Kaberle is tasked with making sure the core principles of Burritt’s success—customer service, quality product and cleanliness—are practiced every second of every day, and he’s loving it. “This is a far larger and more complex business than I’d ever imagined,” he says. A Kaberle bacon tip: “Experiment,” Kaberle says. “Bacon is a versatile item, with a smoky, salty flavor that plays well with others. Sample many different kinds of bacon and try new recipes.” Also important: never grill your bacon over direct flame. “That’s a massive grease fire waiting to happen.” 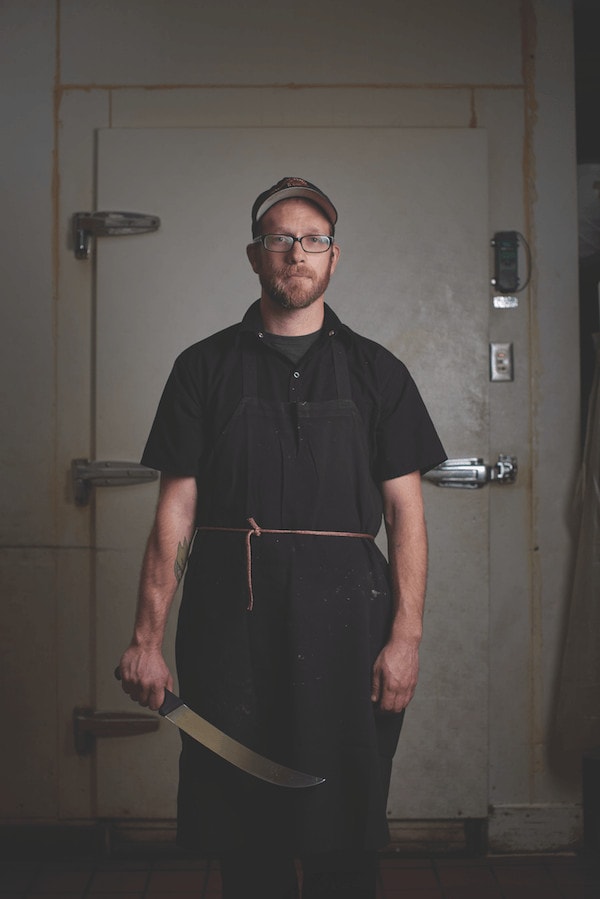 Adam Eastman has been cooking ever since he was 4 years old when he tried to make breakfast oatmeal on the stove in a plastic bowl. “My mom figured she better teach me how to make scrambled eggs right then and there,” he says. Eastman had been working part-time days at Burritt’s and cheffing nights at Amical when Kaberle asked him to come on full time to manage the meat department. He concedes he had some fast learning to do on the butchering front. “I learned that most chefs do not cut their meat the right way—that was a big who-knew for me,” he says. Eastman’s bacon advice: First, buy good bacon—it truly makes a difference. He loves the Nueske’s brand at Burritt’s. For cooking, “never start the pan on too high a heat because the fat gets too chewy,” Eastman says. “I start on low to medium heat and put the bacon in when the pan is cold. Take your time with it. Let it brown on its own. When you take it out of the pan, it won’t seem crispy, but let it sit for a few minutes and it’ll crisp right up.” 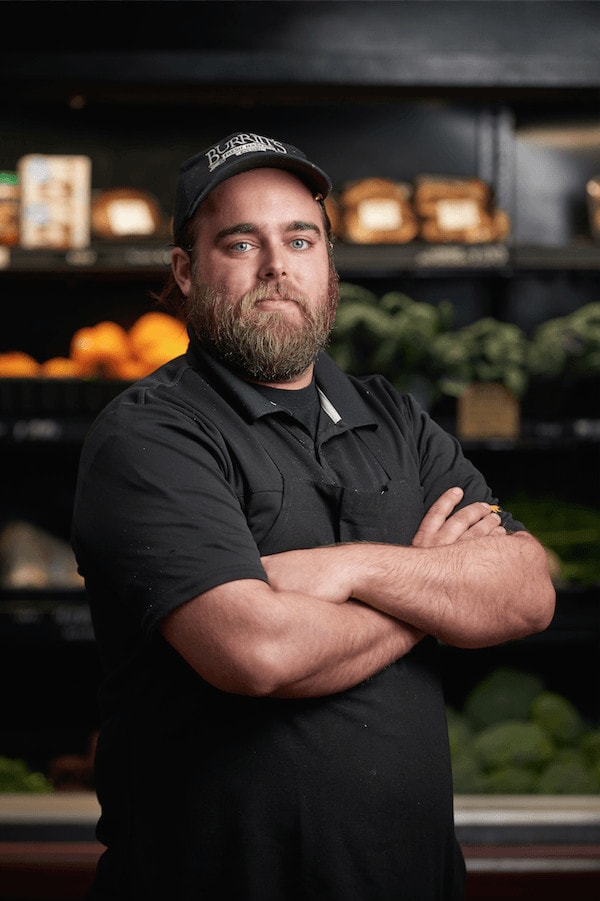 Burritt’s chef and kitchen manager Andrew Griffin began his foodie career working as a busboy under then-manager Jake Kaberle at Boone’s Long Lake Inn, so Kaberle’s recruitment of Griffin into the Burritt’s fold nearly two decades later is kind of a circle of life event. During those intervening years, Griffin studied culinary arts at college and ran and opened kitchens for the Asian food chain P.F. Chang’s China Bistro. “Even though it was a chain, it was all fresh ingredients, made from scratch,” he says. Next chapter: Dan Marsh hired Griffin to revamp the wok offerings at Red Ginger—a restaurant he holds in high esteem. Expanding beyond Asian cuisine into broader themes of food and wine pairings has been one of the greatest pleasures of his work at Burritt’s. “We do a food and wine pairing dinner about once a month and people are raving about them. Every one is sold out,” he says. Griffin’s bacon advice: “I always bake my bacon. 425 degrees for 10 to 15 minutes in a convection oven. The high heat gets it crispy. I put it on parchment paper in a flat pan to make cleanup easy. I’d rather spend time eating bacon than cleaning up bacon,” he says.