Northern Michigan Skiing With or Without the Kids 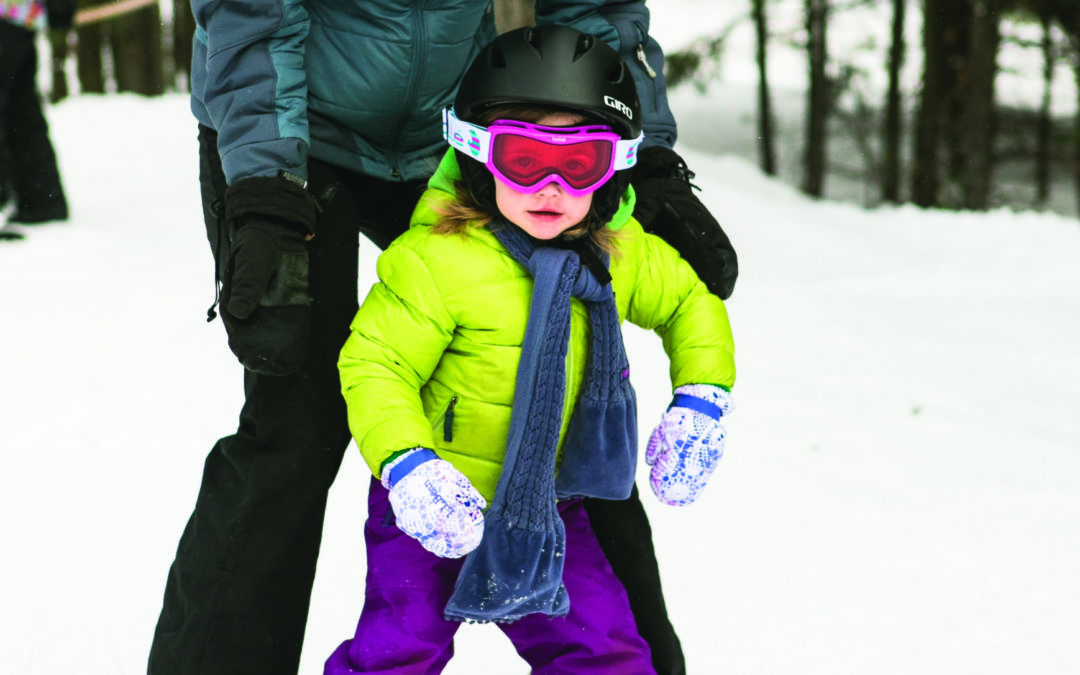 It doesn’t matter if it’s been five, 10, or 20 years since you’ve stood at the top of a Northern Michigan skiing mountain, for whatever reason—one of the most common ones being because of a growing family. But with or without the kids, it’s time to get back out there.

“Ski You Later, Kids,” “First Time on the Hill with the Fam,” along with other tips for getting back on the slopes like “Join a Northern Michigan Skiing Beer League,” were originally published in the January 2016 issue of Traverse, Northern Michigan’s Magazine.

If you’ve been away from the slopes (or stuck on the bunny hill) because of young kids, it’s time to get with the program. Resorts today offer incredible options to make sure the whole family has fun. On-site daycares and in-room babysitters are great for the littlest ones in the family, but for the potty-trained set, half- or whole-day ski school is the way to go.

Boyne Highlands boasts one of the best programs in the state, run by the beloved Austrian Tony Sendlehofer. He’s been in charge of bringing up the next generation of skiers for three decades now, and has it down to a science. Programs include lunch, and kids are grouped by ability. There’s even an end-of-the-week race, complete with trophies, to keep kids going for the gold. Nub’s Nob, Crystal Mountain, Treetops Resort, and The Homestead all have certified instructors, group and private lessons, and super fun areas within the resort designed for learning. Kids often learn best from non-family members, so send them without guilt and make some turns on your own … or take a nap. No one’s judging.

Special deal: Caberfae Peaks has moms covered too, with “Ladies Day” every Wednesday and Thursday. For $17, women get a lift ticket, rentals, and group lesson.

First Time on the Hill With the Fam

Here’s five simple tips for no meltdowns and great memories:

• Have realistic expectations. Go with “green circles” before moving on to the intermediate hills. Never push kids to go down something steeper than they feel comfortable skiing, and remember, the goal is to build lifelong skills, so the easy slopes are a great place to start.

• Always end on a positive note. AKA, quit while you’re ahead. It’s tempting to take one more run when everyone is having fun, but there’s nothing worse than having hunger/cold/exhaustion hit mid-hill. If you step out of your skis and everybody’s smiling, chances are the kids will be begging to go again soon.

• Be prepared. This means having granola bars in your pocket, hand warmers at the ready, and children layered for warmth and comfort. Not only can you avoid many of the pitfalls cold weather and exercise create, you’ll be signaling to your kids that you’ve got them covered. And believe it or not, it’s a Maslov’s Hierarchy sort of thing—when basic needs are met, they’ll feel more ready to tackle new terrain.

• Bribery is totally acceptable. Hot chocolate, brownies, curly fries … whatever special treat has caught your child’s eye. It’s a last-ditch saving grace when they are scared on the chairlift or just downright done at the top of the hill.

• Have fun. This means taking time to play in the woods, throw snowballs, make snow angels. Be silly and loose while making “pizzas” when you stop or “squashing bugs” as you turn. These memories will be what your own kids go back to if they someday need to reboot their own love for skiing.

Planning a vacation to a Northern Michigan ski slope from out of town? Check out this list of cottage rentals that are perfect skiing accommodations.