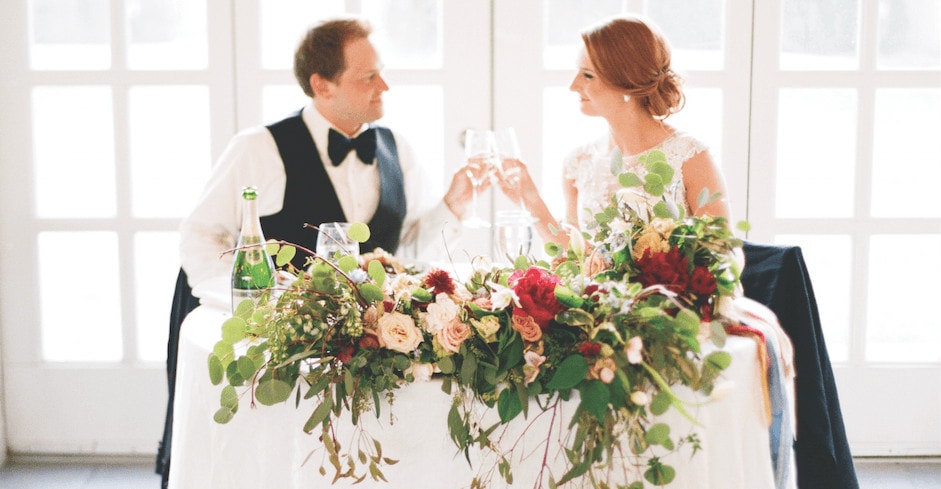 Castle Farms, a historic French Renaissance-style castle in Charlevoix, was the sophisticated setting for the romantic and elegant Northern Michigan wedding Annie and Ryan had hoped for. From the locally catered dinner and stunning bouquets to the frosted landscape, each detail of the beautiful day represented the couples love for each other and Northern Michigan.

This article is featured in the 2016 issue of MyNorth Wedding. Get your copy for more ideas.

It was 14 degrees outside, but inside the Queen’s Tavern, a room in Charlevoix’s gorgeous Castle Farms, a historic French Renaissance-style castle, the light from dozens of candles reflecting off the hand-stitched crystals on Annie’s lace wedding dress warmed the room. No doubt, the Queen’s Tavern was filled with light, love, and history on Annie and Ryan’s wedding day.

The iconic landmark in Charlevoix was nearing its 100th anniversary in March of 2015. Castle Farms was built in 1918 by Albert Loeb, then president of Sears, Roebuck and Company. Loeb envisioned a European-style chateau where he could show off his prize-winning livestock. Since then, the castle and its grounds have enchanted the landscape for nearly a century, while being many things, including an art gallery and a concert venue (where stars like Bob Seger, Willie Nelson and Aerosmith performed). In 2001, Linda Mueller purchased Castle Farms and restored it to its original grandeur. The venue now hosts weddings, events and historical tours. 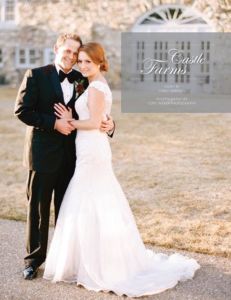 Annie and Ryan have their own history in Charlevoix. The couple grew up three doors down from each other, but their paths didn’t cross until January 2012 while snowboarding at Boyne Highlands in Harbor Springs. Given their love of snow sports, the couple knew they wanted a winter wedding—one that, says Annie, was “simple, romantic and elegant.” The Castle proved their ideal choice, and the understated elegance of the wedding let the beauty of the historic venue speak for itself.

After the ceremony, guests were taken to the West Garden Room for the reception. The wedding’s neutral color theme was a sophisticated fit for the room’s wealth of details including French doors and crystal chandeliers. The evening’s dinner was catered

Guests were also treated to an oatmeal raisin cookie flavored beer that Annie and Ryan brewed at Beards Brewing in Petoskey. “We made it on our three-year anniversary,” Annie says. “We went and bought our wedding bands and then went and brewed our beer.”

On that chilly but beautiful first night of spring, the people who were tucked inside the Castle to celebrate Annie and Ryan’s marriage were indeed treated like royalty!