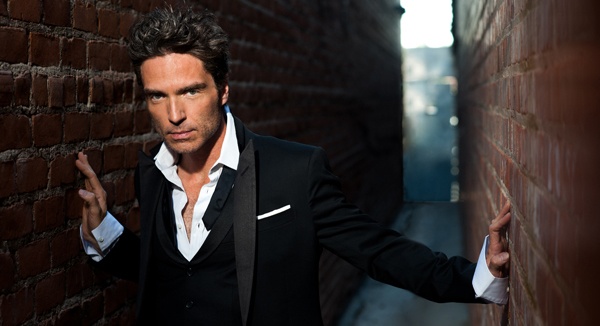 Chart-topper Richard Marx continues to make music his way after his pop mega-success of the late 80s and early 90s. MyNorth entertainment writer Ross Boissoneau takes us behind the music notes of Marx (who is connected to all the stars!) before he performs a Northern Michigan concert event in Manistee this February.

Richard Marx started his musical career early. To hear him tell it, it began even before he was born, with parents who were both musicians. “I started out with a lucky break. I had incredible parents,” Marx said in a phone interview. His father, Dick Marx, was a jazz pianist and jingle writer (“What’s the best tuna/Chicken of the Sea” among many) and studio musician. His mother Ruth sang with big bands and often on his father’s jingles.

To this day, he values his mom’s input (his dad died in 1997). “I wrote a song two days ago, and it’s my favorite thing I’ve written in years. I played it for Mom, and she evaluated it in such a musical way,” Marx said. “The structure, lyric, rhyme scheme – (I love) to be able to share that.” He passed that joy, enthusiasm and talent on to the next generation as well. His three sons are all musicians.

Marx made his first inroads into the industry doing background vocals for Lionel Richie, then moved on to sing behind Madonna, Barbra Streisand and Kenny Rogers, among others. When Rogers remarked that he needed a new song, Marx wrote “Crazy,” which became a #1 country hit for Rogers in 1984. Marx’s eponymous debut album came out in 1987, featuring the hits “Should’ve Known Better,” “Endless Summer Nights,” “Don’t Mean Nothing” and “Hold on to the Night.”

Since that debut in 1987, Marx has scored several more hits and continues to collaborate with other musicians. He’s written music with everyone from Rogers to his buddy Fee Waybill of the Tubes to Nashville musicians. He is the first solo artist to have his first seven singles hit the Top 5 on the Billboard Hot 100 singles chart, and his worldwide record sales exceed 30 million. His song “Dance with My Father,” co-written and performed by Luther Vandross, was a Grammy Award-winner, and his latest chart-topper, “Long Hot Summer,” performed by Keith Urban, gave Marx the distinction of having a song he wrote or co-wrote top the charts in four different decades.

Marx always relished the freedom of being a solo artist, able to write or sing with whoever he wanted. His records have boasted such stellar guests as Billy Joel, Maurice White, former Frank Zappa and Missing Persons members Terry Bozzio and Patrick O’Hearn, Joe Walsh, American Idol’s Randy Jackson, Tommy Lee of Motley Crue, Billy Payne of Little Feat, Steve Lukather of Toto, and jazz stalwart Marcus Miller. “I never wanted to be in a band,” he said. “I wanted to have the freedom. I always made every session very collaborative and fun. The highest compliment is all these incredible musicians have told me they enjoyed it.”

Though long removed from his own pop mega-success of the late 80s and early 90s, he still finds joy and satisfaction from making music. “I enjoy performing music more than ever, but I much more enjoy creating music than recreating it. There’s nothing like when you bring to life what’s in your head,” he said. He’s recently worked with award-winning Nashville songwriters Ashley Gorley and Ross Copperman. “They write every day. Ross is a wiz on laptop. Within two and a half hours (of writing the song), it sounded like a record you could put on a radio. With Fee, we’ve never written in the same room. I give him a track and he writes lyrics and sends it back to me.”

These days Marx has numerous options for live performance. “I can go play solo acoustic shows, or play with a band, or with a 70-piece orchestra,” he said. His upcoming show at Little River Casino is a solo performance, where he’ll accompany himself on guitar or piano. “Solo acoustic is my favorite. It’s not absolutely serious. We’re hanging out for two hours. It’s the hits the way I wrote them, just guitar.

“I’m not looking to conquer (anything), there’s no competition. I just love what I do.”

“I didn’t want to write an album of sad, maudlin songs. I chose to write about the other side of it.”– Marx on his most recent effort, Beautiful Goodbye, written after the dissolution of his marriage

“He’s aiming for atmosphere, not hooks here and, consequently, the record might seem a little elliptical for those expecting a revival of “Right Here Waiting,” but that mastery of mood is also the appeal of Beautiful Goodbye: this was designed for late-night romance, and forceful hooks would distract from the seduction.” – The All Music Guide

Tickets start at $30 and can be purchased at lrcr.com.