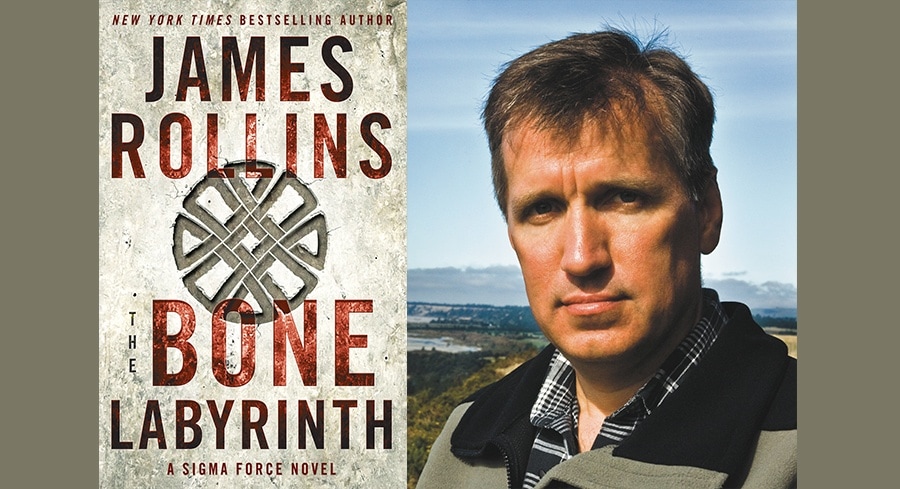 TRAVERSE CITY: The National Writers Series is thrilled to have James Rollins, the #1 New York Times bestselling author of international thrillers, coming to Traverse City. He will arrive on the City Opera House stage January 27 to talk about his journey from animal vet to one of the world’s most popular thriller writers with his Sigma Force series.

What’s Sigma Force, you ask? An elite military research group that solves scientific mysteries and occasionally thwarts evil plots to destroy the world. And, yes, Rollins is one of the country’s hottest writers, in part because he weaves science and history into his brainy plot lines. He has also written children’s books (the Jake Ransom series), stand-alone fiction, and most of America is familiar with his book, Indiana Jones and the Kingdom of the Crystal Skull.

It’s incredible that Rollins spent the first 20 years of his career as a full-time veterinarian, writing during lunch amidst the din of meows and bow wows.

Rollins’ books have been translated into more than 40 languages and have sold nearly seven million copies. His newest Sigma Force book, The Bone Labyrinth, just rocketed to #1 on the New York Times ebook bestseller list.

“The Bone Labyrinth will remind you why you fell in love with reading. This book is that good!” raves New York Times bestselling author Brad Thor.

Guest host Michael Dow is author of Dark Matters, fresh off the press! In 2012, he sold his share of a Washington DC-based management consulting firm, moved to Traverse City, and turned his full-time attention to writing.

Here is the publicist’s Q and A on his latest book, The Bone Labyrinth.

Can you tell us what this latest Sigma thriller is about?

The story begins when twin sisters, both geneticists, are attacked on two different continents: one is assaulted at a research dig in Croatia; the other is abducted from a primate research center outside of Atlanta—along with a very special research animal. The heroes of Sigma are called in to rescue and protect the two women, while exposing a plot by the Chinese government to genetically engineer a hybrid species of human. But the story is also so much more. Besides a continent-hopping adventure, the novel examines the roots of human intelligence, exploring who we are and where we’re headed next.

Your novels are known for their scientific accuracy, for their ripped-from-the-headlines topics. Can you tell us more about this exploration into the roots of human intelligence?

It starts with an anthropological mystery. For the past two hundred thousand years, human brains had been roughly the same size and shape, but for some inexplicable reason, roughly fifty thousand years ago, there was an explosion in art, ingenuity, and civilization. This moment in time was given the name the “Great Leap Forward” and has baffled both anthropologists and geneticists. Why did human intelligence suddenly surge ahead?

The most common accepted theory is that early man had begun to migrate out of Africa, exposing us to foreign lands and unique challenges, which stimulated new innovations and ways of looking at life. But what if it was something more? What if during this migration, early man encountered something more powerful than simply new lands, something that changed our DNA? That’s what this novel explores, tapping into the latest research about an unknown piece of mankind’s history. What I discovered is astounding.

As I understand, a part of what you examine is how we share DNA with Neanderthals, how we once interbred with this other tribe.

We do indeed carry Neanderthal genes. In fact, roughly 2-4% of our genome comes from this unusual ancestor. But we also know it wasn’t just Neanderthals who left traces in our genomes, but also an extinct species called the Denisovans. For example, the Denisovans contributed an important gene that allows Tibetans to live at the high altitudes. Likewise, over the past year, another fingerprint in our DNA suggests there was a third extinct species who also added to our genome, but anthropologists have yet to identify these individuals. But in The Bone Labyrinth, I offer a possible—and startling—answer.

You traveled to China for some background research. Can you tell us how that played a role in The Bone Labyrinth?

I spent three weeks in China researching this story and learned how wonderful the people are there, but there remain serious issues, mostly centering on the government’s level of secrecy and espionage. On a side note, I did visit the Beijing Zoo and, as a veterinarian myself, I found the state of that zoological park to be appalling, and even this detail plays a major role in the story.

It seems every month we’re hearing about Chinese hackers committing acts of espionage here in the United States. Does this element appear in your novel?

Definitely. The Chinese government’s pervasive system of hacking, espionage, and infiltration plays a central role in The Bone Labyrinth. But even more importantly, I expose a significant threat from the Chinese that most Americans may not be aware of. It involves the placement of Chinese students in U.S. colleges and institutions.

Currently half the physics doctorates from U.S. universities are awarded to foreign nationals, most of whom take their diplomas and return home. And much of their education is underwritten by the American taxpayer—through grants and financial aid. Not only does this pose a security risk, but we’re also creating our own market competitors. Scientists and engineers ultimately drive innovation—and we’re shipping that intellectual capital abroad.

An element of this story does sound like it was ripped from the headlines, specifically about Chinese scientists genetically modifying human embryos.

It’s a concern I tackle in this novel. Some believe that genetically modifying embryos could eradicate devastating diseases before a baby is born, but we’re also talking about a slippery road toward eugenics, where human life will be engineered, where babies will be designed, where potentially there will be a new class of human. And while this sounds like the stuff of science fiction, it’s already yesterday’s news. The genie is out of the bottle—and where that might lead is explored in The Bone Labyrinth.

Speaking of scientific experimentation and research, The Bone Labyrinth introduces a character like no other, a young gorilla who had been genetically modified in a very unique way. Can you discuss how this character came about?

As a veterinarian, I love to fold animals into my stories in unique ways. The character of Baako was a chance to explore intelligence in nonhuman primates – to compare and contrast that with our own intelligence. What I discovered from doing extensive research is that there are many similarities, which are explored in this novel through this character.

In fact, there’s been a growing movement to recognize primates as worthy of equal protections. The European Union, Australia, Japan, and New Zealand have all banned or tightly restricted the use of great apes as research models for humanitarian reasons. Sadly, the United States still does not have any such restrictions and continues to use great apes in projects, often with limited oversight or supervision and in projects that are often deemed as useless and unproductive.

Moving past the science in the story, your books are also renowned for shining a light on historical mysteries and unusual historical figures. Can you share an example from The Bone Labyrinth?

Sure. I was raised Roman Catholic, so I feature a Catholic priest in this book who is fascinated (as am I) by a Jesuit father who lived during the seventeenth century. His name was Athanasius Kircher and he was considered to the Leonardo Da Vinci of the Jesuit Order. He was a master of a hundred disciplines: medicine, geology, and Egyptology, engineering. He was also a bit of an adventurer, even having himself lowered by ropes into Mount Vesuvius shortly before an eruption, all so he could better understand volcanoes. I found his mix of science and faith fascinating. And in The Bone Labyrinth, our heroes will be following breadcrumbs left behind by this man, including the very real possibility that Atlantis existed—and where it might be found today.

There’s another true-life Catholic priest who plays a role in this book.

Indeed. Father Carlos Crespi. He was a monk who ran a remote missionary in Ecuador for fifty years, until his death in 1982. But he was also a scientist with multiple doctoral degrees: botany, anthropology, history. Still, he is best known for the vast collection of mysterious artifacts given to him by the natives of the surrounding rainforests. Most of which were made of gold or adorned with precious jewels. They numbered in the tens of thousands. But what was strange was that many of these precious relics bore motifs that made no sense, as they better fit other ancient cultures: Sumerian, Babylonian, Egyptian. What were they doing being pulled out of the jungles of Ecuador? Where did they come from?

The mystery eventually led to a great search into a cavern system that spanned the Andes, led by a reclusive American hero: Neil Armstrong, the first man to walk on the moon. His strange enlistment in this venture plays a major part of The Bone Labyrinth.

But the connection to the moon in this story goes beyond Neil Armstrong.

It does. In this story, you will learn how truly strange the lunar satellite is. For example, have you ever wondered why, during a solar eclipse, that the shadow of the moon perfectly covers the face of the sun? This happens because the moon is 400 times smaller than the sun, while also sitting 1/400th distance between the earth and the sun. No other planetary moon in our solar system matches this symmetry, not even close. Isaac Asimov described this odd alignment as “the most unlikely coincidence imaginable.”

And that only scratches the surface of the true oddity that circles our planet. By the time you are done reading The Bone Labyrinth, you will never look at the moon the same way again.

In The Bone Labyrinth, you also reveal that there is a code buried in our DNA, one that will shock readers.

No, it will blow their minds—because it’s all true and verifiable. It’s a single prime number—a number that is not only locked in our genetic code, but it’s the same number that can be found in the unusual symmetries of the earth, sun, and moon. Even stranger, it can also be found in the very first line of the Book of Genesis. But to reveal more would ruin too many of the true and shocking surprises found in The Bone Labyrinth.

But trust me, when you reach the end of The Bone Labyrinth, you will begin to understand the true wonder of humanity and this world.