Combining young energy, fine musicianship and song lyrics that channel wise souls, Traverse City band The Accidentals is building a fan base while resolutely defying the label-makers. Go behind their melodies with Tom Carr, originally published in the December 2015 issue of Traverse, Northern Michigan’s Magazine.

The revolving colored spotlights shine on Katie Larson and Savannah Buist as Katie lays down a jam on her electric body-less cello. She mixes classical, Irish and jazz riffs before she passes it over to Savannah on a stage under a large, white tent in downtown Bellaire for Short’s Brewery’s 10th anniversary celebration.

Savannah takes the tag on fiddle with Celtic and rock and roll riffs as she steps one of her black canvas Converse shoes onto one of the monitor speakers at the front of the stage. She’s wearing the knee stockings adorned with cat graphics that are becoming a trademark for her. As they shred their bows, exchanging solos, they both appear to peek out at the audience with one eye from behind their hair. Through the course of a show, they switch off instruments several times, both taking turns on guitar and bass as they sing their infectiously melodic original tunes. 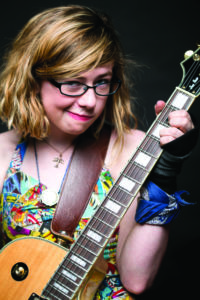 The Accidentals, comprised of Katie and Savannah and drummer Michael Dause, is one of the hottest tickets in Northwest Michigan and beyond. As they play the Bellaire gig, they’ve just returned from a long Western tour, where the influential South By Southwest festival in Austin, Texas, named them one of their Top 7 Breakout Bands. And they are working on their next album, which will be co-produced by Stewart Lerman and Marshall Crenshaw. Lerman has worked with major entertainers including The Roches, Elvis Costello and Regina Spektor. Crenshaw, a singer-songwriter, had his own Top 40 hit in 1982 with “Someday, Someway.”

After the Bellaire gig, they put their feet up on the couches of a post-show reception room. They were tired—not just from the stage-searing performance they’d just finished, but also from the long tour and exciting new developments. They were looking forward to a brief break before the madness of the summer season.

Katie and Savannah both come from musical families. Savannah, a k a Sav, was born in Nashville, where her father played piano at the Grand Ole Opry. Katie’s father is a pianist at Interlochen Center for the Arts. Both of their mothers are singers. While Savannah was only 16 and Katie 15 when they met, they were already accomplished instrumentalists and students at Traverse City Central High School. They volunteered for a musical class project and ended up having to practice it together. “We didn’t know each other all that well,” Savannah says. “It took a long time to get comfortable, because we’re both introverts.” 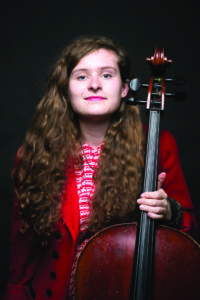 “When we met, we didn’t know this is what would happen,” Katie says. “I could barely perform in public, and Savannah had never written a song. But the two knew they had something special and wanted to cultivate it. They both enrolled at the world-renowned Interlochen Arts Academy in its then–brand new singer-songwriter major.

In music, an accidental is a note of a composition that’s outside the key. Those notes can add spice by taking the listener to an unexpected place. Katie and Savannah take their listeners to unexpected places in the course of a concert, or even just by clicking around their many YouTube videos.

They’re often called folk-rock, but that doesn’t cover Katie’s jazzy, bluesy “The Sound a Watch Makes When Enveloped in Cotton” or the fact that she wrote one song based on a melody by Bela Bartok. Savannah’s sunny-day, singable yet profound “Epitaphs” exists somewhere outside that folk-rock label, as well. Listening to their voices, you may hear hints of Edie Brickell, Madeleine Peyroux or Suzanne Vega. And despite Michael’s use of brushes and Katie’s and Savannah’s use of bows, they just flat out rock at times. Just check out their unaffected but rock star-ish faces and stances when they’re deep into a solo.

Their meeting may have been accidental but their considerable honors and growing following are not. They’ve worked hard for the four years since they became friends. In the past year, they’ve played hundreds of shows, criss-crossing the map between the coasts.

Michael grew up in Novi, and met Katie and Savannah at Blissfest Music Festival in Cross Village, where he was playing guitar. As they chatted with him, they learned he also played drums and was already a fan of the duo. “Everybody was getting sick of me telling them to listen to The Accidentals,” Michael says.

What Savannah remembers: “He knew all the material.”

When they’re not writing songs or practicing, they’re spending up to nine hours at a time driving. Katie says they’re learning how to eat and exercise well despite the grueling schedule.

Those long treks have also inspired them to find new ways to amuse themselves. For one thing, they’ve discovered that Michael is a pretty good impersonator. When he breaks out into a perfect Gilbert Gottfried voice, for example, and delivers “Why is nobody paying attention to us?” (a riff on the comedian’s famous line), the band breaks out laughing.

It was on an in-state road trip that Savannah discovered the cat socks at a shop in Saugatuck. That was when they toured with several other female musicians for the Girls With Guitars tour, which included Blake Elliott, E Minor, Miriam Pico and others. The now-iconic socks are dark and topped by a cat’s ears and eyes. Savannah explains that they’re actually tights and The Accidentals now sell them on their web page. Those socks have paid off in another way, too. They’re what caught Marshall Crenshaw’s eye when he saw their page on ReverbNation, a website for career musicians.

Savannah’s mother, Amber Buist, has been a huge part of The Accidentals’ success. She’s been managing them and accompanying them on their tours. She’s just about done with that, though, now that they’re adults and can hire a manager.

On a Sunday afternoon last spring, people stood in the drizzle for half a block outside the fabled Ann Arbor folk venue The Ark to see The Accidentals play. The band had been there before as a warm-up act. This time they headlined.

After the fans settled into the loft auditorium and the stage lights went up, Savannah told the crowd that playing here has been on their “bucket list.” They proceed to show the audience why they’ll likely be reaching a lot of their other goals, too. Their musical prowess has been known around Traverse City ever since they started playing open mic nights.

Now, with all the road miles and stages they’ve seen, The Accidentals are becoming well-rounded performers. They mix up their shows with a range of styles, but also with amusing stories of life on the road and how they wrote certain songs. These two self-professed shy women seem at home in front of a crowd—whether they’re talking about life on the road or about how Savannah wrote “Epitaphs” in a bathroom stall, or about how they and Michael each pick up an electric bass to tear up Meghan Trainor’s “All About that Bass.” All three stand close for harmonies on a song or move out into the audience for a number.

Savannah says they’re “going with the flow as long as we can,” though the two original members both figure they may want to try other things eventually.

“Savannah is going to be a physicist,” Katie says.

“Katie is interested in finding herself and farming in other countries,” Savannah adds.

They laugh when they answer for each other like that, but say those ambitions actually are among their long-term dreams. But fans needn’t worry. The operative term there is “long-term.” They have a lot more plans for their musical careers and already have plans to do three more CDs with Lerman and Crenshaw beyond the one they’re working on now.

Still, they sometimes wonder if they should be thinking about college.

“Our parents say we can always go back later,” Savannah says.

Tom Carr is a multi-media journalist and writer living in Buckley. You can also hear his reporting on Interlochen Public Radio.