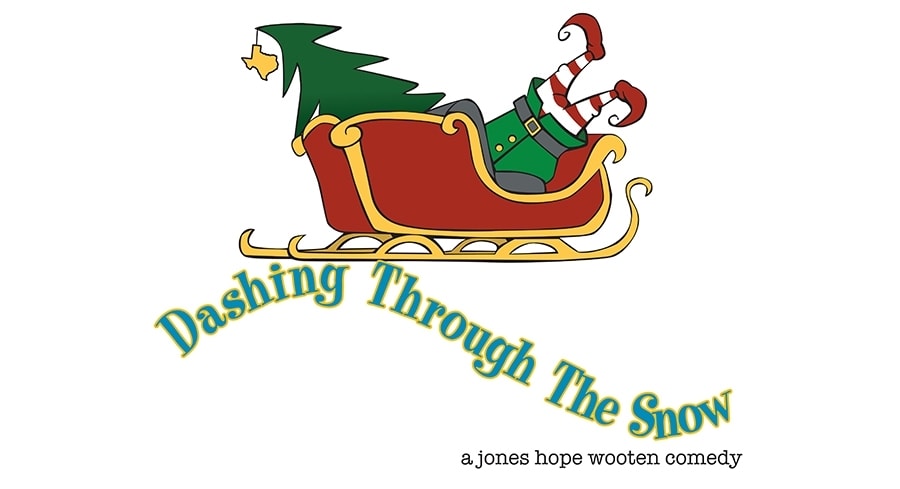 The Kirtland Community Theatre Co. returns to the Kirtland Center for the Performing Arts in Roscommon with their annual Christmas comedy Dashing Through The Snow! Get ready for the Northern Michigan holidays as you watch a colorful parade of eccentric guests arrive at the Snowflake Inn and deck the halls with holiday hilarity in the tiny town of Tinsel, Texas. Dash to Kirtland for a comic romp through the snow December 11 to 13, but first, learn more with MyNorth Media entertainment writer Ross Boissoneau.

Dashing Through the Snow details the toils and travails of the holidays at the Snowflake Inn in Tinsel, Texas. Proprietor Trina is frantically trying to prepare for them while dealing with a host of eccentric, wacky guests and employees whose every action leaves comedic chaos in its wake. The characters include a quartet of elderly sisters; Mrs. Claus and Binky, one of Santa’s elves and her not-so-secret admirer; two very self-involved actors from an extremely low-budget touring production of A Christmas Carol; a tipsy housekeeper; and a brother and sister who find this the perfect time to try to end the 30-year-old feud between their aunts. This production is one of 17 versions of the play being presented around the country this holiday season.

Any comedies from the South, such as Designing Women, and theatrical comedies in general

Comic playwrights Jessie Jones, Nicholas Hope and Jamie Wooten wrote the show in 2010. Jones co-authored the Off-Broadway Southern-fried funeral comedy Dearly Departed, which has become a perennial theatre favorite across the U.S. and around the world. She also co-wrote its feature film adaptation, Kingdom Come, which starred LL Cool J and Whoopi Goldberg. Hope, winner of the Texas New Playwrights’ Award, was director of casting for Theatre Communications Group in New York, The Goodman Theatre in Chicago and ABC Television in New York and Los Angeles. With Jones, he wrote for the Emmy-winning Disney television series Teacher’s Pet, starring Nathan Lane. Wooten was a writer and producer for The Golden Girls, where he won the Writers Guild of America award. He co-created the CBS series The Five Mrs. Buchanans. Together the three have written a number of plays set in the South, with similarly outlandish and idiosyncratic characters embodying and gently parodying Southern stereotypes.

Tickets for the Roscommon Christmas comedy are $20 and can be purchased at MyNorthTickets.com or by calling 989-275-6777.