After battling the dilemma of building with wetlands on their property, the Wagner family ended up with a Long Lake home so unique and beautiful that it caught the attention of Discovery Channel’s Ultimate Homes: Waterfront Edition. MyNorth’s Lissa Edwards tells us more about the Traverse City home on Long Lake with a 322-foot long bridge.

This home was featured in the December 2015 issue of Northern Home & Cottage. 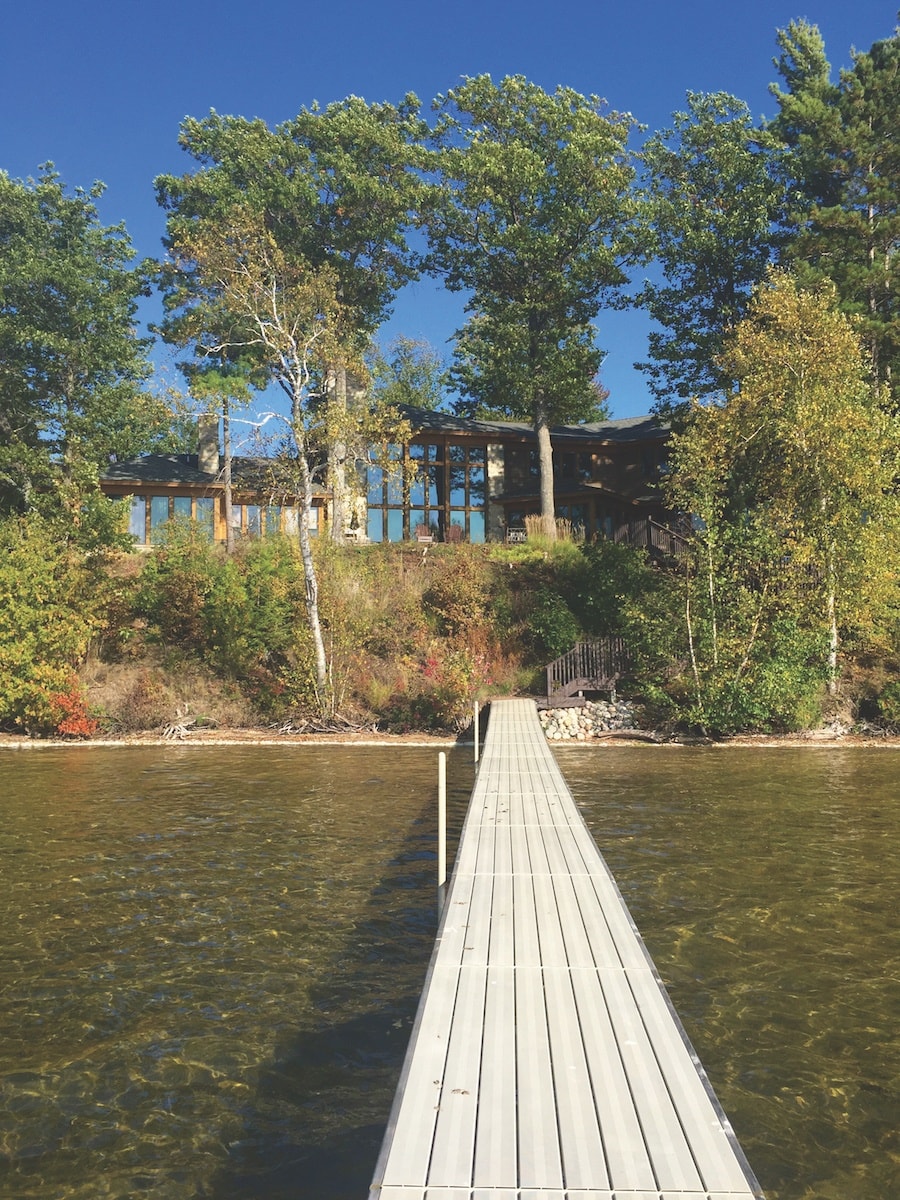 September 11, 2001. The Wagners—two parents and seven children—were living in Washington, D.C., when American Airlines Flight 77 crashed into the Pentagon. They lived close enough to see the smoke, to feel the panic, and witness the bedlam of people rushing to find loved ones—of children at their kids’ schools not knowing if their parents were alive or dead. Kim Wagner recalls not being able to stop the tears. Three days later, their 3-year-old daughter drew a picture of a plane plunging into a building as a birthday card for a family member.

Kim and her husband, John, began thinking more and more about their property in Northern Michigan. It was a peaceful spot, bordered on one side by Long Lake, on the other by wetlands—big quiet, comforting marshes. They always thought they’d build a vacation cabin on it someday. In the wake of 9/11, however, the couple began thinking about a year-round home. On a visit to Northern Michigan several weeks after 9/11, the Wagners found a whole different world. “We went into the 7-Eleven in Traverse City and saw people leave their keys in the car—their purses on the front seat,” John remembers with a laugh.

That feeling of security the family found Up North sealed the deal. “We said, ‘Ya know, we can make this happen,’” Kim remembers. The couple put their Washington, D.C., house on the market, and by summer the Wagners were headed north to figure out how to build on their extremely difficult-to-build-on property. 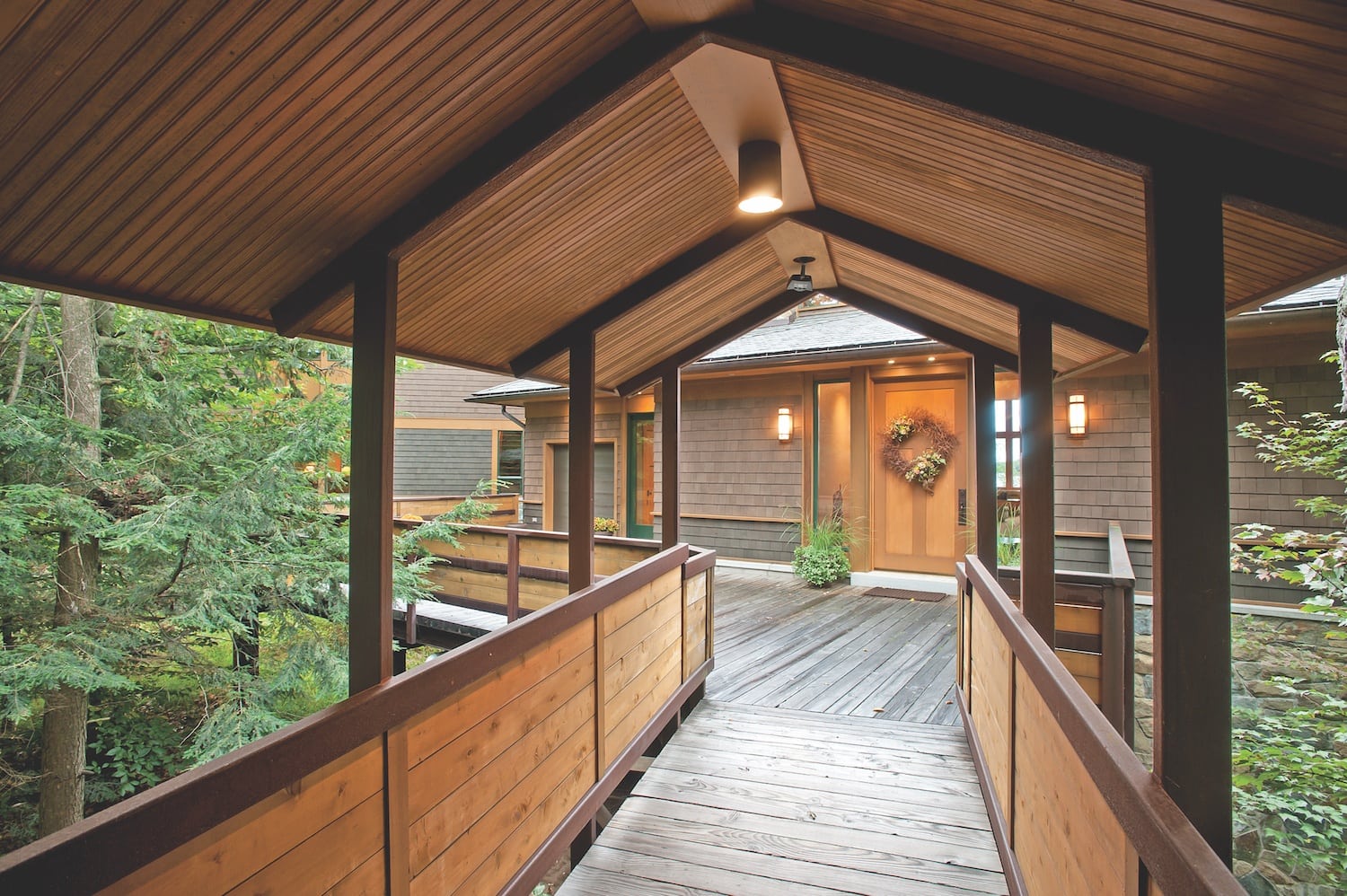 After a long, respectful discourse with the Michigan Department of Environmental Quality, they found that the only way the DEQ would allow them to build on their land was by putting a walking bridge over the wetlands that would connect their house to their two garages and driveway. A very long bridge—322 feet long to be precise.

Always a couple to welcome a challenge, the Wagners set to work making their home a reality, hiring renowned Washington, D.C., architect David Cox and his associate, Tom Wheeler, to design it. David and Tom had designed the Wagners’ previous home in D.C. and, as John says, “They knew our preference for clean lines and open spaces.” 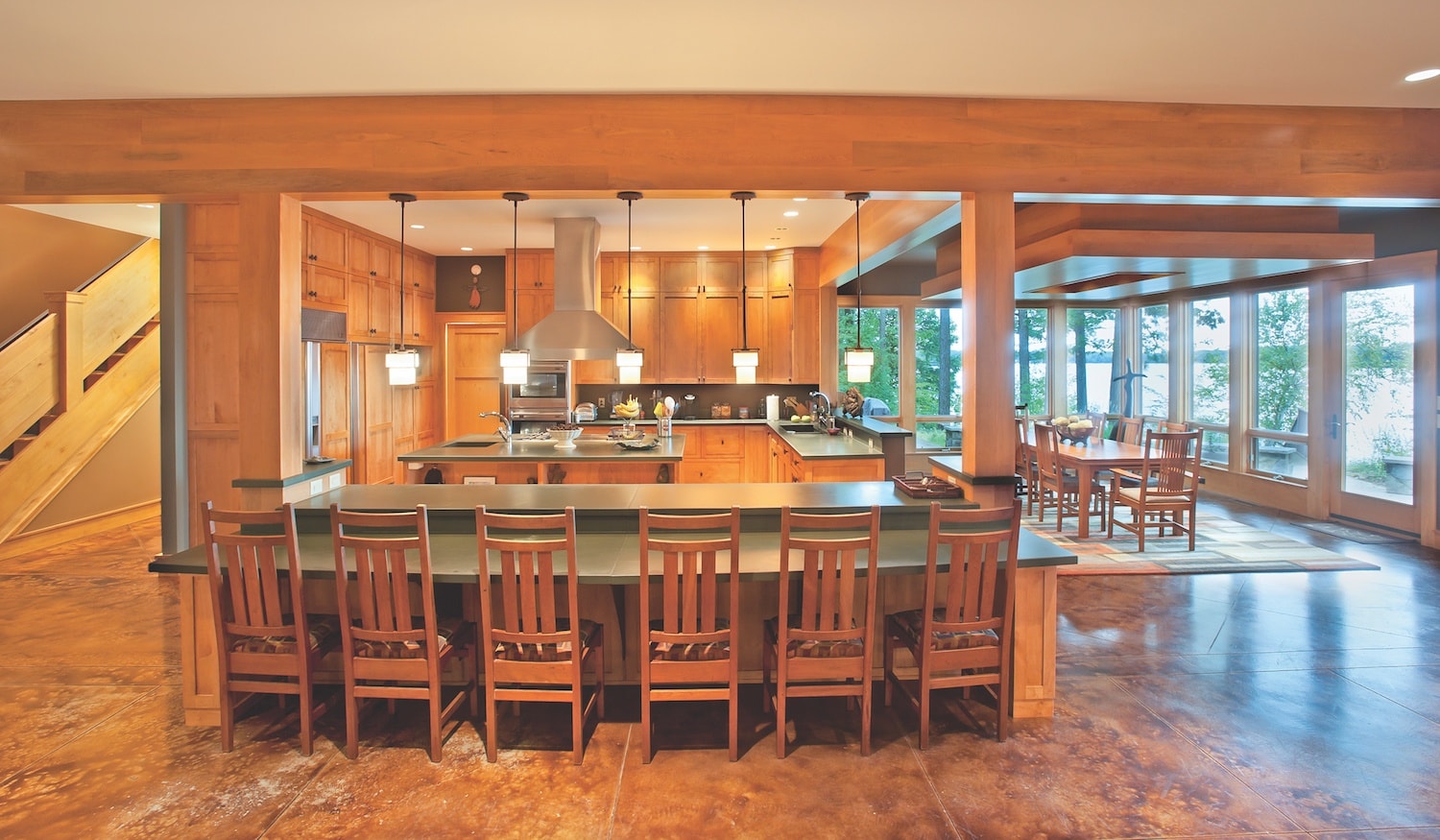 The team designed a magnificent timber frame home that is centered on a great room looking out onto Long Lake through floor-to-ceiling windows. The master suite is on one wing, the children’s bedrooms on the other. Cox terms the home’s style “Frank Lloyd Wright meets Jackson Hole”—meaning that it embodies Wright’s fondness for linear woodwork, natural materials and open floor plans, while it also has the soaring ceilings (26 feet) and massive stone fireplaces (one in the great room and the other in the master bedroom) that evoke a western lodge.

The dramatic bridge entrance across wetlands was an architect’s dream. As John describes David’s vision: “You pull into the garage, meander through the tops of trees, don’t know where you are going, then you open the door and, wham, you’ve got this panoramic view of Long Lake.”

Of course, making it all happen was no easy feat. To avoid filling wetland, the logistics for building the bridge included hiring a bridge builder from Ludington to pile drive 24, 16-inch hollow core steel columns into the wetlands until each column hit bedrock. Once properly placed, each column was filled with concrete. The column depth ranges 20- to 40-feet below grade, depending on the bedrock location. The bridge is covered, both for aesthetic reasons and to protect it from the weather. 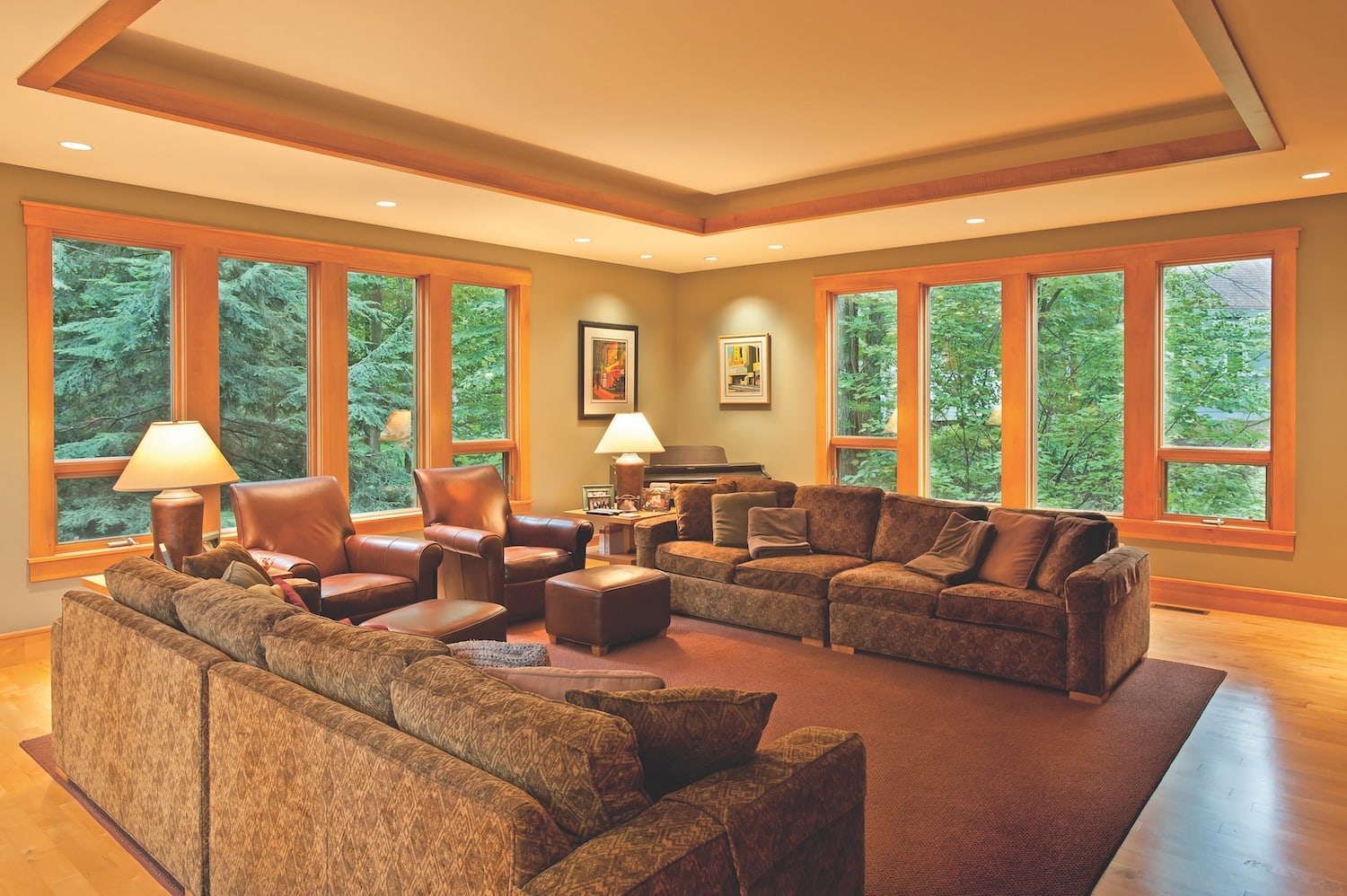 The Wagners have been in their home almost 11 years now, and have never once regretted the fact that getting to their front door is a 322-foot walk from their garage. While a small garage to park a golf cart was designed into the home, they have yet to buy one. “We’ve found that the walk is great exercise,” John says, going on to explain that the view over the wetlands is gorgeous all year, and in the summer it has the mystery of Jurassic Park, while in the winter it is a snowy, pristine wonderland. For their kids and their friends, the bridge was a one-of-a-kind playground.

By the time producers for the Discovery Channel contacted the Wagners last fall asking to film a segment on their home for the show Ultimate Homes: Waterfront Edition, the family had long since gotten used to the fact that theirs was no everyday dwelling. Last March a five-person crew from Discovery flew into Traverse City to film their home. In typical Wagner-family style, the family had a blast watching and participating in the filming. When the show aired, they all snuggled into the deep, comfy furniture in their family room to watch—chuckling at the way they looked on television. All in all, it was a pretty sweet validation of their decision to build a whole new life in the aftermath of tragedy.

Northern Home & Cottage is a bimonthly publication included in all subscriptions to Traverse, Northern Michigan’s Magazine. Subscribe online or give us a call, 231.941.5653.