From the Wife of a Michigan Football Fan 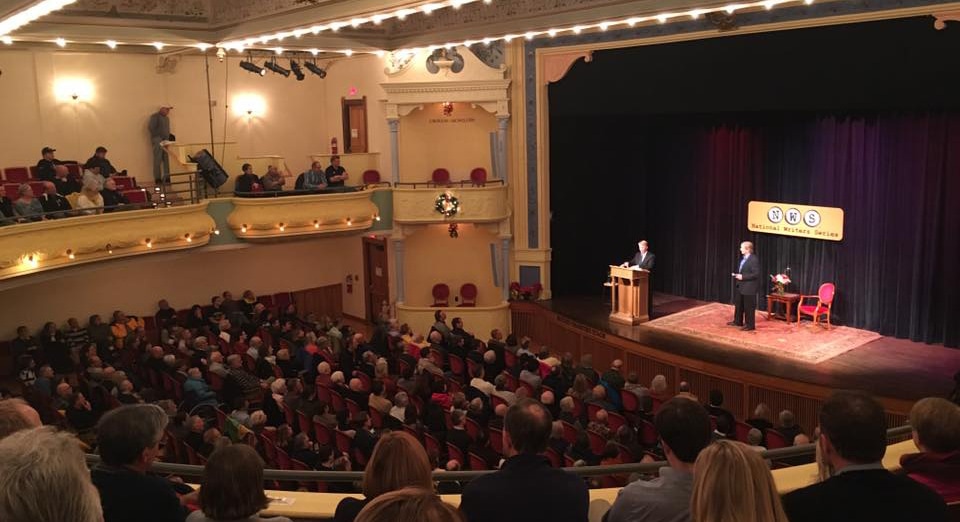 My husband is a die hard University of Michigan football fan. I respect his passion for the team, but to be honest, I’ve never quite understood it. Sure, generations of men in his family have been fans—so of course, he is, too. I respect that. But not being able to eat for two whole days after that big loss to Michigan State in October? That I don’t get one bit. So when John U. Bacon came to downtown Traverse City to talk about his latest book ENDZONE: The Rise, Fall, and Return of Michigan Football as part of the National Writers Series, my husband’s eyes lit up, and I knew where our next “Date Night” would take us. And let me tell you: As a Michigan football fan’s wife who never really got it before—I do now.

John Bacon, a self-proclaimed “fudgie” who spent his summers with family at Torch Lake in his youth, is a New York Times bestselling author. It’s no surprise that on his ENDZONE book tour, his second largest stop was here in Traverse City (second to undoubtedly Ann Arbor), as he started off his career writing stories about the Traverse City Trojans. He even wrote an essay about Camp Hayo-Went-Ha for Traverse Magazine in 1998 (read it here!). And as a Michigan football outsider amongst a crowd of fans wearing maize and blue at his book tour last night, I enjoyed hearing about John’s—and Coach Jim Harbaugh’s—Northern Michigan ties. So much in fact, that by the time his speech started revolving around Michigan football, even I was hooked.

It’s plain to see that John is a natural born storyteller, as he engaged National Writers Series audience members with tales of his career that eventually led him to being named an unofficial historian of Michigan football by the New York Times. The more John told us about the values and cultures of the U-M football program, the more the dedication of all those involved began to make a bit more sense to me. Sure, there’s the involvement of the players, coaching and athletic department staff, but the way he described Michigan fans rang true to what I see in my husband and my in-laws. True tradition. Where else do you hear about tons of small neighborhoods being cultivated in the stands season by season? At the Big House they do.

As John continued to talk Michigan football traditions, and I heard those in seats next to me murmer with shared devotion, I started to think the obsession my husband has isn’t rare—and that he’s certainly not alone. As well-known voice of U-M football Bob Ufer is famous for representing Michigan football as a religion … what I once thought was a tad crazy of a notion, I now see as simply Wolverine solidarity, that goes deeper than just a game of football.

Please let me make myself clear: before this Traverse City event, I was by no means part of this Michigan mania; I sat in the audience as a true outsider, with my only affiliation being a Northern Michigan writer, and at one time, fudgie, too. My family bleeds green and white. But the Michigan football spirit within the City Opera House was contagious! John spoke with intense fervor and the audience reciprocated it. Kudos to John, at times I wanted to join the fellowship, hearing the little voice in my head say, “Go Blue!”

But while I am not going to transition into being a full-blown Michigan football fan now, at least I can understand the devout dedication fans have a little more. And after the next rough game, I’m going to tell my husband John’s advice. Although he was slightly joking last night as he shared with the audience tips on recovering from a loss, I think they might come in handy in my household. John said: breathe deeply, think of sunsets, and don’t replay the MSU game!

Hopefully this will get a smile from my husband, or at least he’ll eat a little food after his team loses next. Fingers crossed!