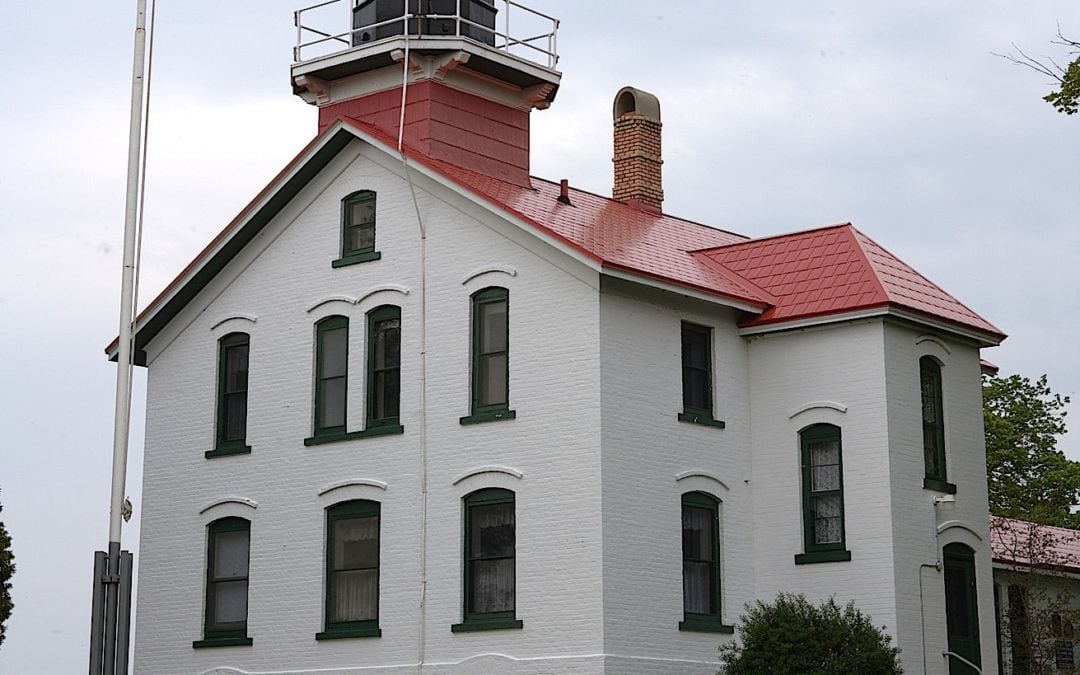 In 1922 James McCormick became keeper of the Grand Traverse Lighthouse on Northport Point. He brought with him his wife, Mary, and eight children. While their father faithfully tended the light, the children experienced an unforgettable childhood set against the rocky point panorama.

Summers were a blend of swimming, berry picking and playing games along the beach. Winters were harder. A trip to the privy meant fighting the north wind and struggling through a snowdrift that piled as high as 7 feet. Or perhaps worse, itching under long johns that stayed on until spring. The McCormick children left for school in the dark—a trip that meant walking a mile to meet the sleigh that would take them the rest of the 8 miles to Northport. It was dark again by the time they returned home.

Christmas took the edge off the long, cold season. Snug in the classic white and green building with its festive red roof, the McCormick family celebrated by singing around their pump organ, strapping pie tins to their feet to skate on the frozen lake, and stringing cranberries for the tree. Many decades later, Bette McCormick Olli, the second youngest of the McCormick children, captured the spirit of those holidays in her reminiscence “A ‘Grand’ Grand Traverse Lighthouse Christmas.” Read on to experience the joys of their simple celebration of Christmas at Grand Traverse Lighthouse.

It looks like we’re in for a Nor’wester,” comments Pa as he pours a bucket of coal into the magazine of the old base heater. “She’s blowing a gager off the lake right now.”For an instant the red coals become smothered and blackened by the added fuel, but soon the flickering flames escape the isinglass windows and dance merrily upon the living room walls. In every glass Christmas tree ornament tiny fires begin to glow. The stove burns fiery red again and each window in the old cast iron cathedral sends forth warmth and cheer. Our faces, as we sit around the heater like chicks around a brooder, become as rosy as the cranberries we are stringing to decorate the tree. We withdraw our feet from the shiny nickel fenders where we have been warming our toes after returning from the woods. Somebody says they’ve got chilblains.

Earlier in the day we had trekked into the woods, braving the elements, two of the oldest kids pulling the youngest on a huge homemade green sled which John had christened Iona. The rest of the clan followed in single file, the tassels of our stocking caps bobbing up and down as we traversed over snow covered hill and hummock. Laddie, our little brown dog, trailed behind us, joyously barking and sniffing out every rabbit and squirrel track or plowing tunnels in the light fluffy snow with his nose. Teddy Bear, the calico cat brought up the rear and complained vociferously in her feline fashion, as cats often do.

Far into our enchanted Grand Traverse forest our little train came to a halt. There before our very eyes was what we deemed to be the most beautiful tree we had ever laid eyes on. It seemed a pity to cut it down. However, after a lengthy discussion and after getting approval from the brown dog and calico cat, we chopped it down and hauled it home for parental inspection.

Ma’s high, reedy soprano floats from the kitchen throughout all the rooms, some strange ballad about poor young Caroline and her betrothed named Henry, all the while keeping time with her wooden spoon as she stirs up some concoction in her big brown crockery bowl. The sound of a cast iron pan scraping across the red hot cook stove lids and the ping of kernels as they explode against the sides of the pan heralds the delicious aroma of buttery popcorn. The delightful pop, pop, pop, of simmering cranberries as they split their skins rivals the sound of the popping corn.

One of the kids is sitting at the dining room table fashioning a blue basket and pink roses from crepe paper. Later the creation will be dipped in hot wax and when the wax hardens the basket and flowers will hold their shape. It is a Christmas present for Ma, which she will keep and cherish for years. In fact, it lasted until John became nervous about going to work on the Hyacinth, a lighthouse tender, and picked it all apart.

John is whittling one of his numerous little cork lighthouse boats, the shavings curling from his jack knife and falling into the kindling box behind the kitchen stove. Maybe he is making a present for his youngest brother. However, he teases and says he hasn’t quite decided who will get it.

Soon drowsiness induced by the penetrating heat from the stove overtakes us and heads unwillingly begin to nod. One of the kids wails peevishly as the red and green paper chain she is making falls apart. What had started out to be joyous undertaking has turned into a laborious chore.

“Time for bed,” Ma announces as she lights the wax candles on the tree, an annual Christmas Eve ritual. It is quite a treat to see the fluttering lights. The tree seems to come alive with a thousand winking eyes. But all too soon the candlelight is extinguished. We can’t take a chance of starting a fire. We beg Ma to play us a tune on the accordion so she plays a short rendition of “Red Wing.” Then we pick up the little brass lamps and the calico cat. Little brown dog trails reluctantly behind and the sleepy crew enters the chilly hall and staggers up the stairs. We quickly jump into bed and nestle beneath the covers, falling soundly asleep to a duet of a whirring top and the cry of a mama doll.

It seems as though we have hardly fallen asleep when someone yells “Merry Christmas!” We jump out of bed unmindful of the cold floor, race down the stairs and jam up at the bottom. The door flies open and we tumble over one another onto the living room floor. Amid laughter and shouts we tear open the packages and there among the ribbons and bows is a celluloid donkey who will walk by himself down an incline shaking his head from side to side as he walks. Also, there is a wooden penguin which waddles stiffly down a slanted plane but disdains to move his head. There are round cakes of paint glued to a cardboard strip with a brush attached which loses its bristles the first time you paint with it. A magic paint-with-water book makes beautiful red, green and blue pictures appear when painted with nothing more than water. There is a Jew’s-harp for our youngest brother, who has learned to play the instrument without knocking his teeth out. There is a harmonica for Doug who plays certain romantic “Big Band Tunes.” There are fancy bottles of ten-cent store perfume, one shaped like a violin, the other like a flower. This we girls will splash on the new lace hankies. There is a little rabbit fur monkey which climbs up a string and stinks so of strong glue that we can hardly stand the smell of him. We went along for years thinking that was the way all real monkeys stank. Then there are the usual necessities like sock, caps, scarves and mittens.

Suddenly we turn our attention to the vicinity of the fireplace. Maggie has just discovered the coal that John has placed in her stocking the night before. She’s yelling at the top of her lungs that she is going to slaughter him. There they are, both of them, squared off to do battle. John is in his underwear with his trap door ajar and flopping with every little dance he does, and Maggie is in her shift with a garland round her head. She is a make believe snow princess straight off the make believe stage turned into a she-devil. We all sit waiting for a repeat of World War I, however, Pa quickly nips all that in the bud as he firmly but calmly states, “Now you’ve said your little piece for the day and you don’t need to get into politics.” He punctuated his statement by vigorously shaking down the ashes in the grate.

We find our stocking with the orange in the toe and the fat Brazil nuts … There are miniature wax bottles filled with sweet colored sugar water. You could only get one little sip from each bottle, but we chewed the wax afterward. Hard candy of every description filled the sock, compliments of Clarence Scott’s store which is now Dame’s. Clarence always gave Pa a couple of bags of candy for promptly paying his grocery bill. Some people only got one bag and we somehow thought they must not be as honest as Pa. It never entered our heads that it could possibly be because we had more kids. Well, we eat candy until we are sick and it is time for dinner.

We sit down to dinner of roasted turkey, dressing and gravy. The white damask tablecloth is on the dining room table and set with Ma’s best Depression and carnival glass and a special cut glass berry bowl filled with strawberries canned during the summer.

Finally, darkness descends upon us and fills each and every corner of the dining room. The lamps are lit and once again a grand Grand Traverse Christmas has come and gone.

Excerpted from “The Way It Was: Memories of My Childhood at Grand Traverse Lighthouse,” by Bette McCormick Olli (Lighthouse Publications, 1990). 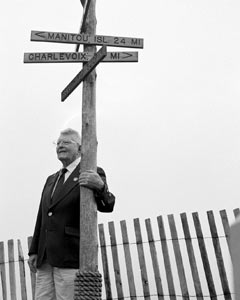 One McCormick boy grew up to be a lighthouse keeper himself. Doug McCormick, James and Mary’s seventh child, joined the Coast Guard in 1934 and kept the light at St. Martin and Pilot islands. In 1980, long since retired and recently widowed, McCormick moved back to Northern Michigan.

Not long afterward, McCormick read a notice inviting the public to a meeting about restoring the lighthouse he grew up in. He attended—and knew he’d come home. For the next several years he pitched in with other volunteers to return the lighthouse keeper’s apartment to the way he remembered it as a child. McCormick pried up linoleum to expose the maple floors, scraped off lead paint, and brought his mother’s furnishings back to the lighthouse. Her circa 1910 oak table graces the dining room again, the pump organ is back in the living room, and even the clock hangs in its old spot.

In 1984 McCormick moved into the assistant lighthouse keeper’s apartment to assume the duties of Grand Traverse Lighthouse caretaker and tour guide, entertaining families and school groups with stories of his childhood. Among them is pointing out the step he sat on while he waited for his turn to eat at the dining room table during holiday dinners. “I kind of egged them all along, you know, so they didn’t eat everything,” McCormick says. But his favorite trick is telling children to listen for the creaking step—the one that means the ghost of his father, lighthouse keeper James McCormick, has come to tend the light.

This feature ran originally in the December 2002 issue of Traverse, Northern Michigan’s Magazine.