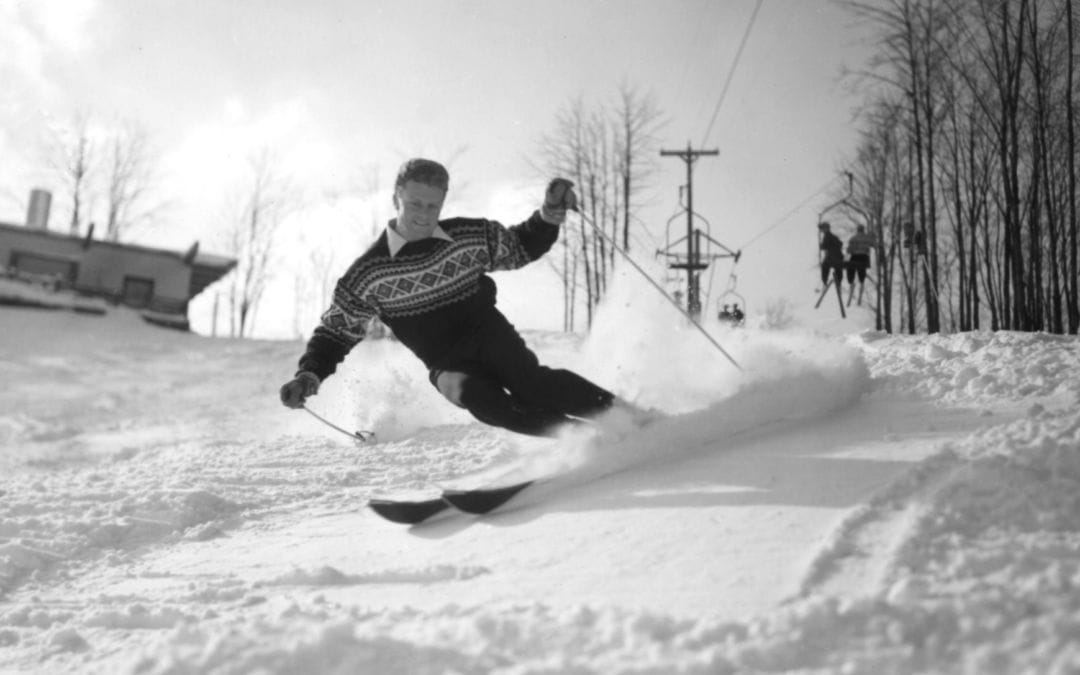 BOYNE FALLS: Today gives reason to honor and truly celebrate the life of one of the most important individuals in Boyne Mountain’s history who is also recognized as the world’s “Father of Freestyle Skiing,” Stein Eriksen.  At 88 and surrounded by his family, he peacefully passed away yesterday at his home in Park City, Utah.

A Norway native, Stein Eriksen’s part in Boyne history was far from a chance occurrence, rather a calculated endeavor on the part of Everett Kircher.  The two met in the early 1950s and Stein purchased a Studebaker from Everett’s Detroit dealership.  Stein won the gold medal in giant slalom at the 1952 Winter Olympics using his unique counter-rotation method of skiing.  Everett learned of this and extended an offer of $5,000 for Stein to promptly move to Michigan and lead Boyne Mountain’s ski school.  Stein put his acceptance on hold, continued training and won triple gold at the 1954 World Championships.  Believing his amateur days were behind him, Stein soon moved to Boyne Mountain, bringing along other Norwegian instructors, and served three winters as the school’s director for what he claims was $10,000 per season (a comical debate which bred much joking between the two for more than 40 years).  Everett wrote, “His ski school classes were packed and his private lesson book was constantly filled” and in a letter written for inclusion in Everett’s book, Stein wrote, “If the learn-to-ski-weekers didn’t know what skiing was all about when they came to Boyne, they did by the time they left.”

Stein’s introduction of reverse shoulder skiing, later carried on by Othmar Schneider, elevated Boyne Mountain’s ski school to nationwide notoriety for many, many years.  Equal to his graceful technique in terms of revolutionizing America’s ski industry was his talent of combining his gymnast and skier skills.  His swan dive combination with somersaults is believed to be the inception of inverted aerials and cause for his “father of” status.  It’s believed that he pulled off the first flip on skis at Boyne Mountain, landing it at the bottom of Hemlock.  Stein’s acrobatic moves mesmerized skiers and athletes of all ages and it’s both impactful and prideful to recognize that the early years of his famed performances took place right at Boyne Mountain.

According to Everett, Stein was “blonde, handsome and the most beautiful skier you’d ever seen, gliding over the snow like a bird sailing on the wind.”  He knew his efforts to lure Stein to Boyne Mountain would pay dividends, and that they did.  Stein lived in the United States for the rest of his legendary life and the connection between the Kircher and Eriksen families has remained strong.  Paying homage to his contributions, it was Everett who chose Stein as the namesake of the lodge’s restaurant, as well as Stein’s Mambo ski trail.

SKI magazine named Stein No. 4 among its Top 10 Most Influential Skiers of All Time and a Grand Rapids Pressarticle labeled him the “Babe Ruth of skiing.”  Beyond good looks and being a pioneer within the industry, Stein had a warm personality.  His deep love of the sport continues to inspire so many.

BOYNE will be dedicating their Torchlight Parade and fireworks display on New Year’s Eve in Stein’s honor.