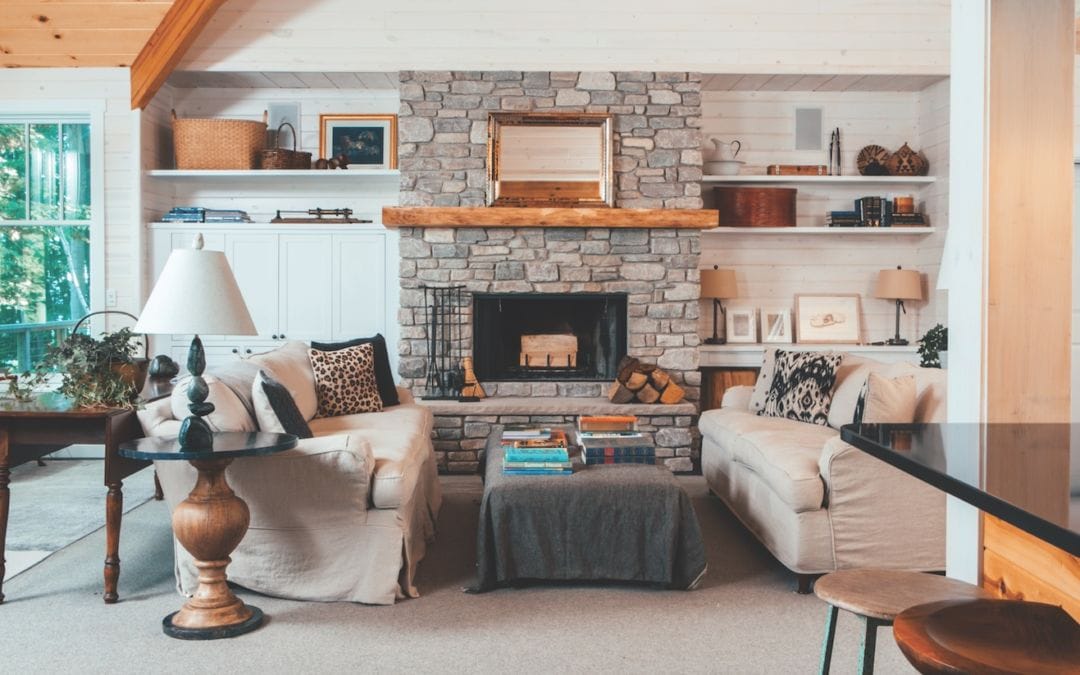 A longtime Crystal-area summer family gets a year-round home—and a chance to spend the holidays at their beloved Crystal Lake.

This home is featured in the December 2015 issue of Northern Home & Cottage, a bi-monthly home publication included in all subscriptions to Traverse, Northern Michigan’s Magazine. Subscribe. 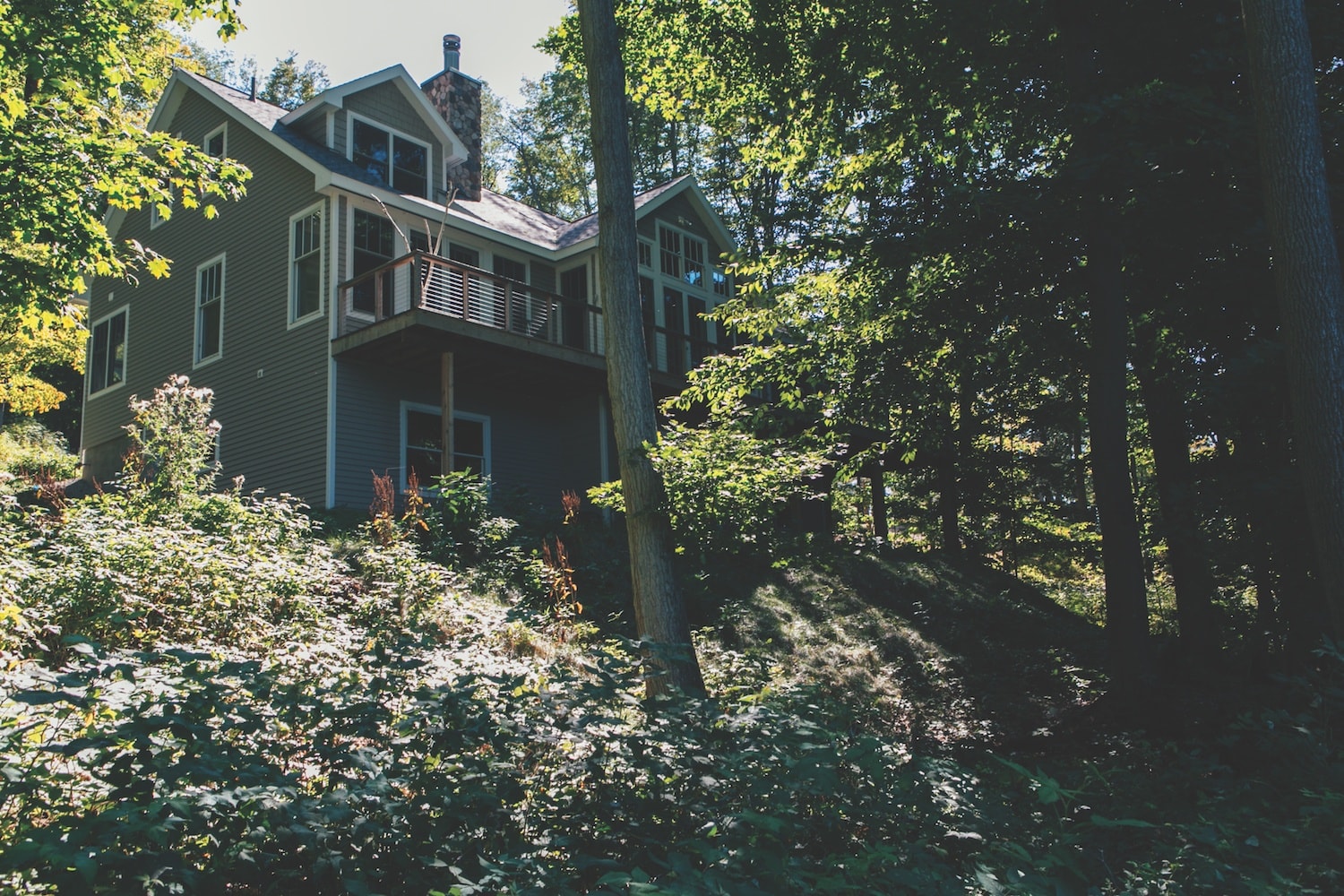 The Blessings may have lived in Portland, Oregon, for most of their adult lives, but if you ask them where they are from, they don’t give you a one-place answer. That’s because David, a family doctor, and Betsey, an artist, are as rooted in their summer community as they are in Portland. While both were raised in Chicago, David spent every summer on Crystal Lake since he was 3, and Betsey’s family began summering in the community when she was in college. The Blessings continued their families’ tradition, bringing their now-grown four children up to Crystal Lake every summer of their childhoods.

In those years, the Blessings had a cottage in the historic Congregational Summer Assembly—a summer community on Crystal Lake founded in the early 1900s. Once affiliated with the Congregational Church, CSA as it is known, still cherishes many of the values it was founded on—including a deep appreciation for the natural world, the arts, spirituality and, in the summer at least, a love of simple, rustic living. 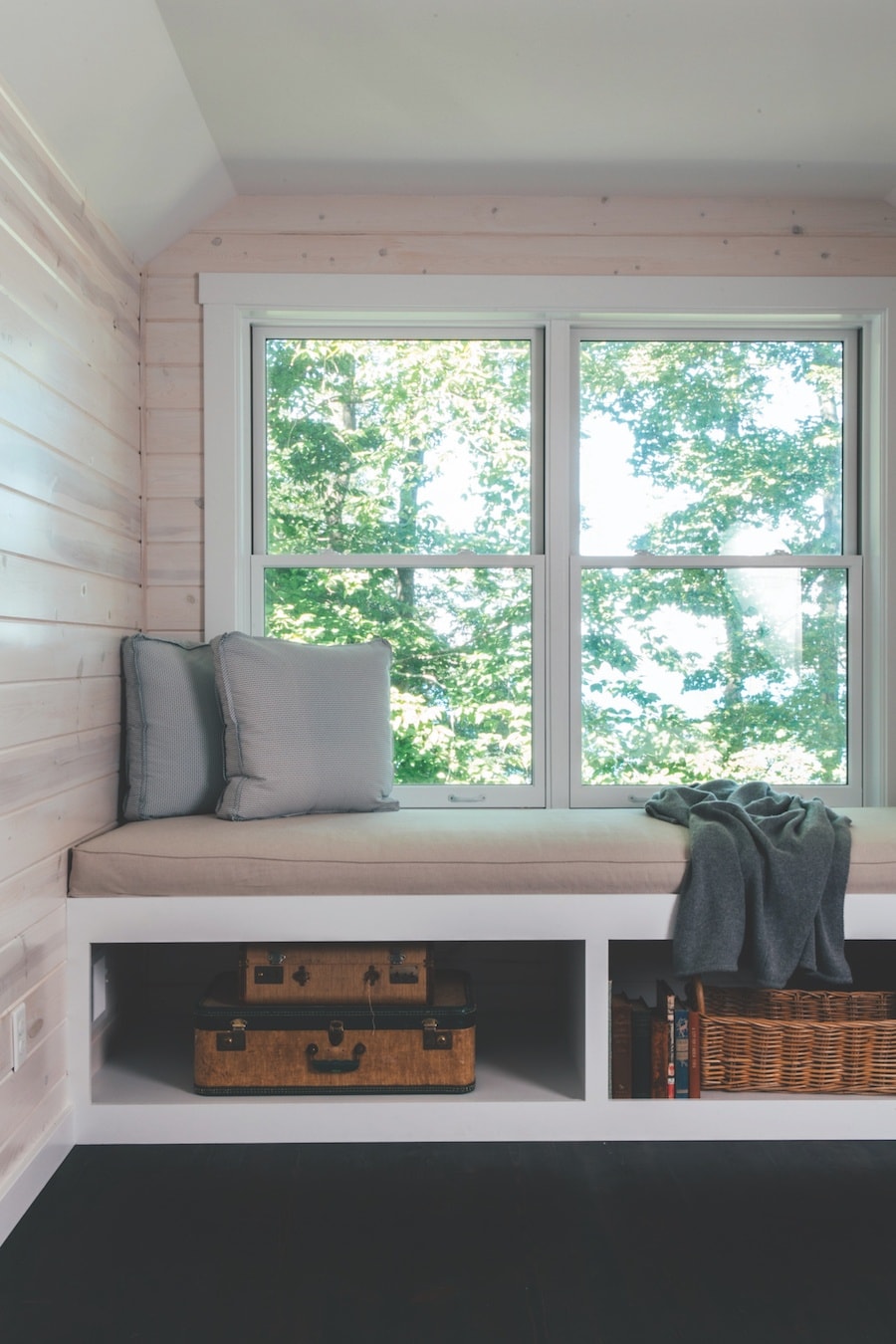 The Blessing cottage was vintage CSA—built on poles (in lieu of a foundation), it had no heating system and a steep, rickety stairway. When someone offered them cash for it, they figured the time had come to build something a bit sturdier. With their extensive connections in the area, it didn’t take the Blessings long to find an exquisite piece of property tucked into a steeply wooded site overlooking Crystal Lake. (Happily, their youngest daughter and her husband purchased the property behind it.)

While they would have been fine building another true summer cottage—sans central heating and insulation—local building codes no longer allow construction so primitive. Even so, they wanted their new, fully insulated and year-round home, to have a timeless summer cottage vibe. To that end, the Blessings’ credit their architect Caleb Luibrand (based in nearby Beulah) with capturing that fresh, uncomplicated spirit. “His passwords are windows and light—so that the outside becomes your entertainment,” David says. 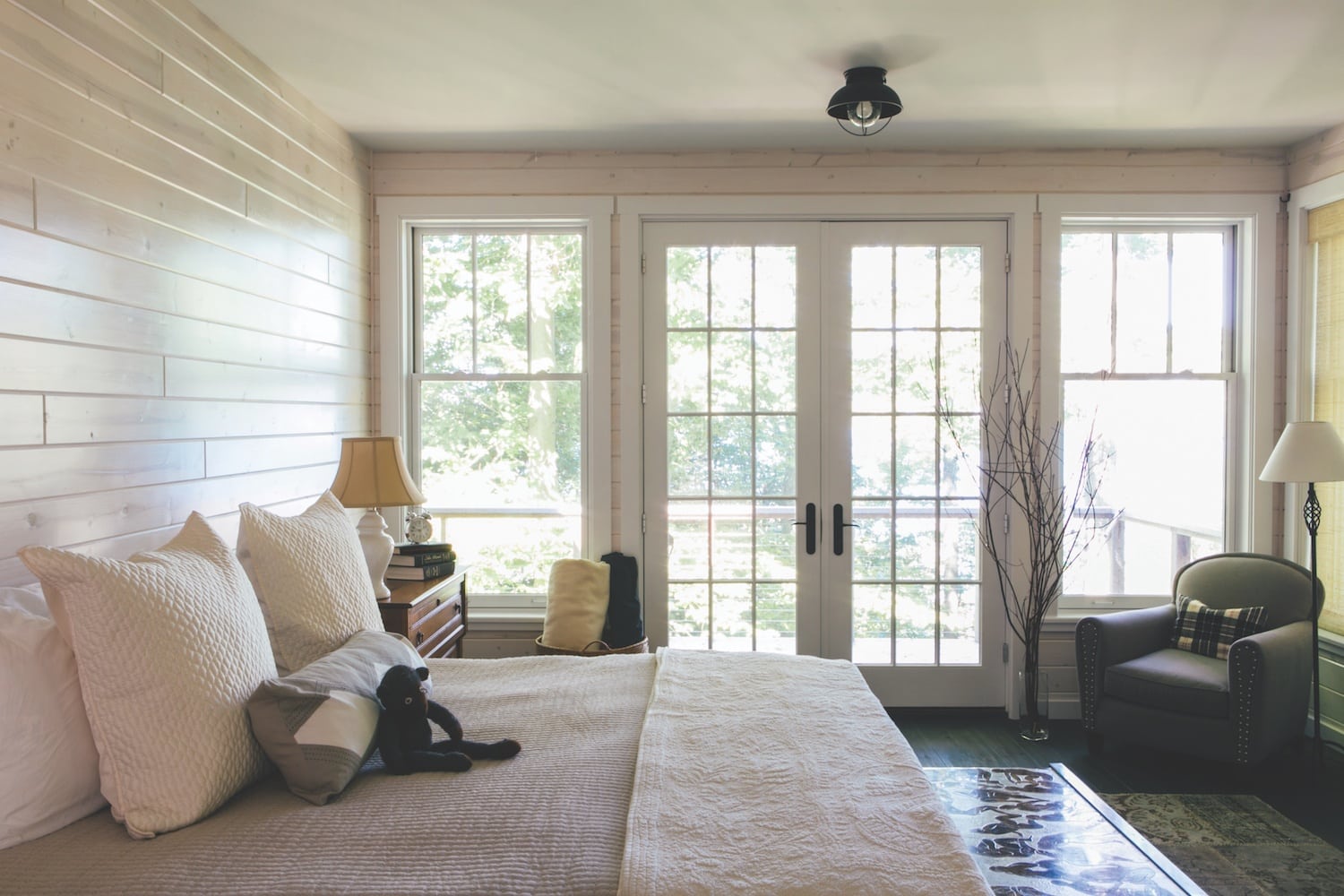 Builder Mike Ferraro, of Ferraro Builders, gave form to the vision. Not only was the steep site hard to build on (and necessitated a massive retaining wall), but most of the construction took place during the off-season, when the Blessings were in Oregon. “Mike was great to work with,” Betsey says. “I trusted him to make decisions for me when I couldn’t be here to see it. And when he needed to reach me, he had to go all the way to the top of the driveway every time he called because he couldn’t get service. ”

The home’s simple, two-story floor plan runs parallel along the bluff and opens onto a deck that sits among the treetops. Floor-to-ceiling windows along the lakeside, a vaulted ceiling on the ground floor and a loft-style upstairs landing accentuate the open and airy feeling. A liberal use of knotty pine speaks vernacular cottage at every turn. On the walls, the pine paneling is hung horizontally—for a relaxed look—and finished with a whitewash. It appears whitewashed on the ceiling, as well, while a clear seal on other portions shows off the pine’s warm yellow tones. 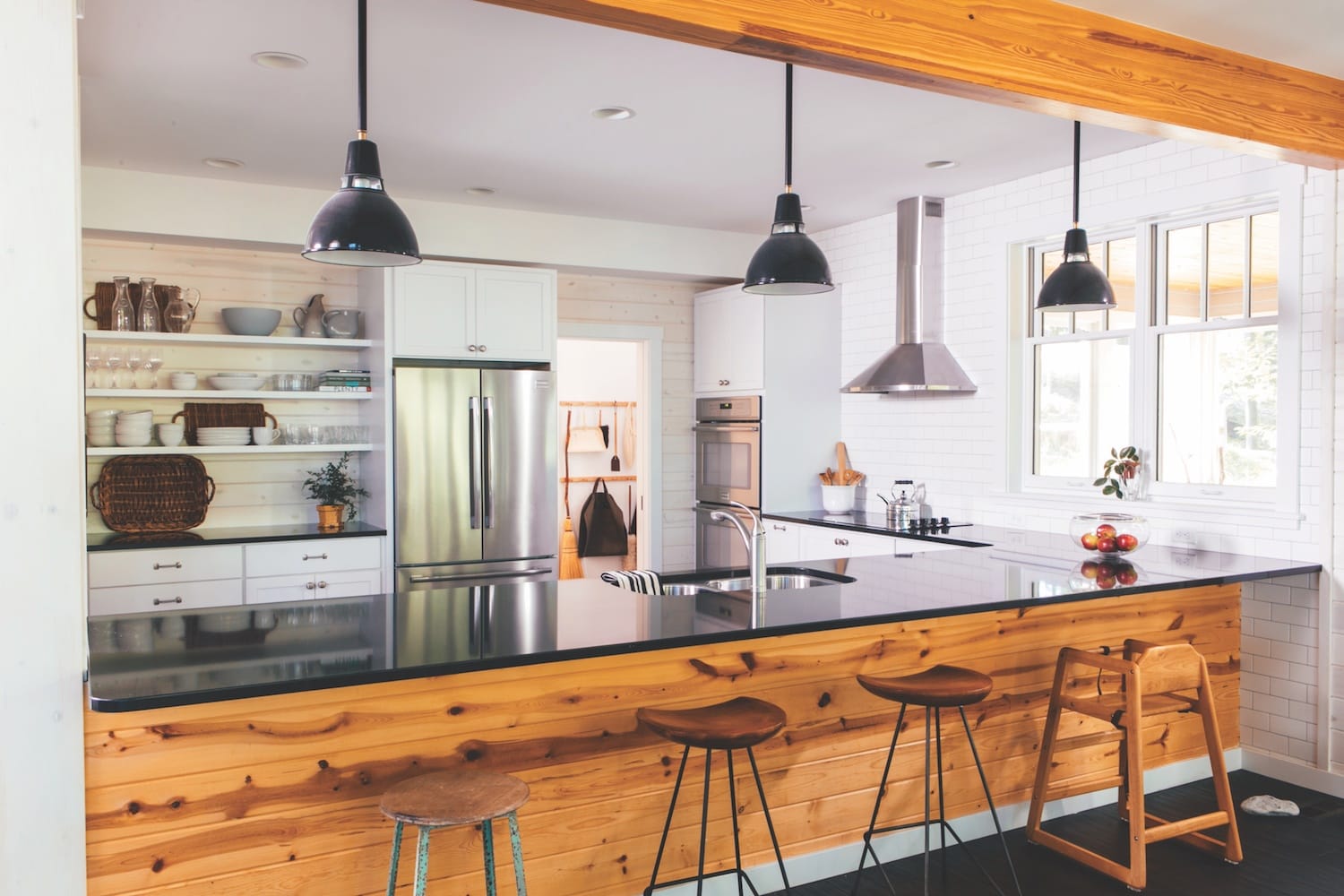 The Blessings even faced the base of the kitchen island in clear-stained pine—a touch that creates a handsome contrast with the black granite countertop. The stacked stone fireplace, French doors, double-hung windows with vertical mullions and white subway tiles on the kitchen walls, all work to enhance the cottage ambiance. In a nod to their Portland life, the Blessings chose vintage light fixtures from that city’s Schoolhouse Electric.

When the couple arrives in late spring, they have a view through the tree limbs down to Crystal Lake. As the foliage matures the view disappears, but David says that they have learned to love being surrounded in green for the summer months. One of their greatest delights, however, has been being able to use their new, snug home during the winter. With three, going on four, holiday seasons under their belts now, they can fully testify to the fact that the lake they love is as enchanting covered in snow and ice as it is in its aquamarine summer glory. 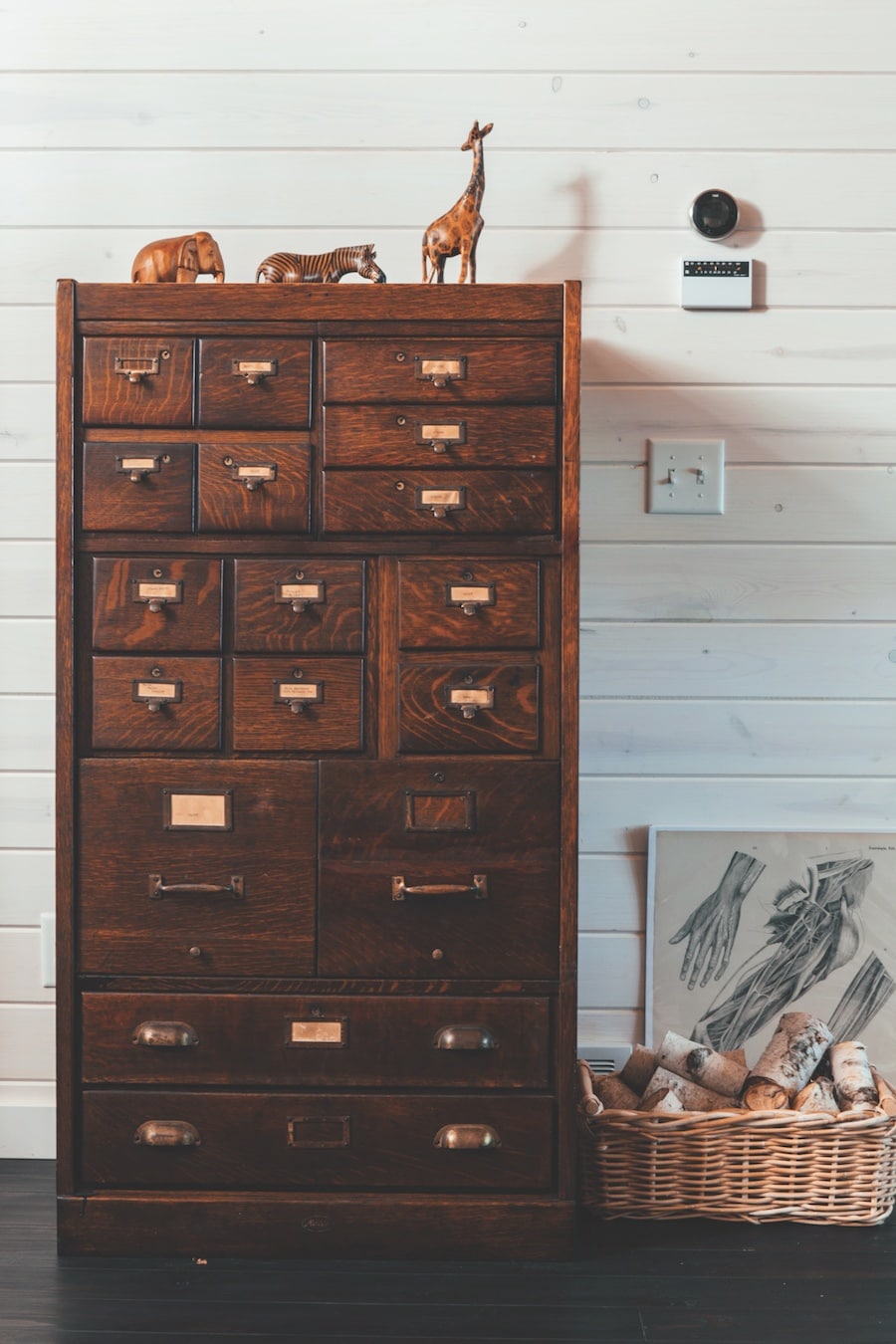 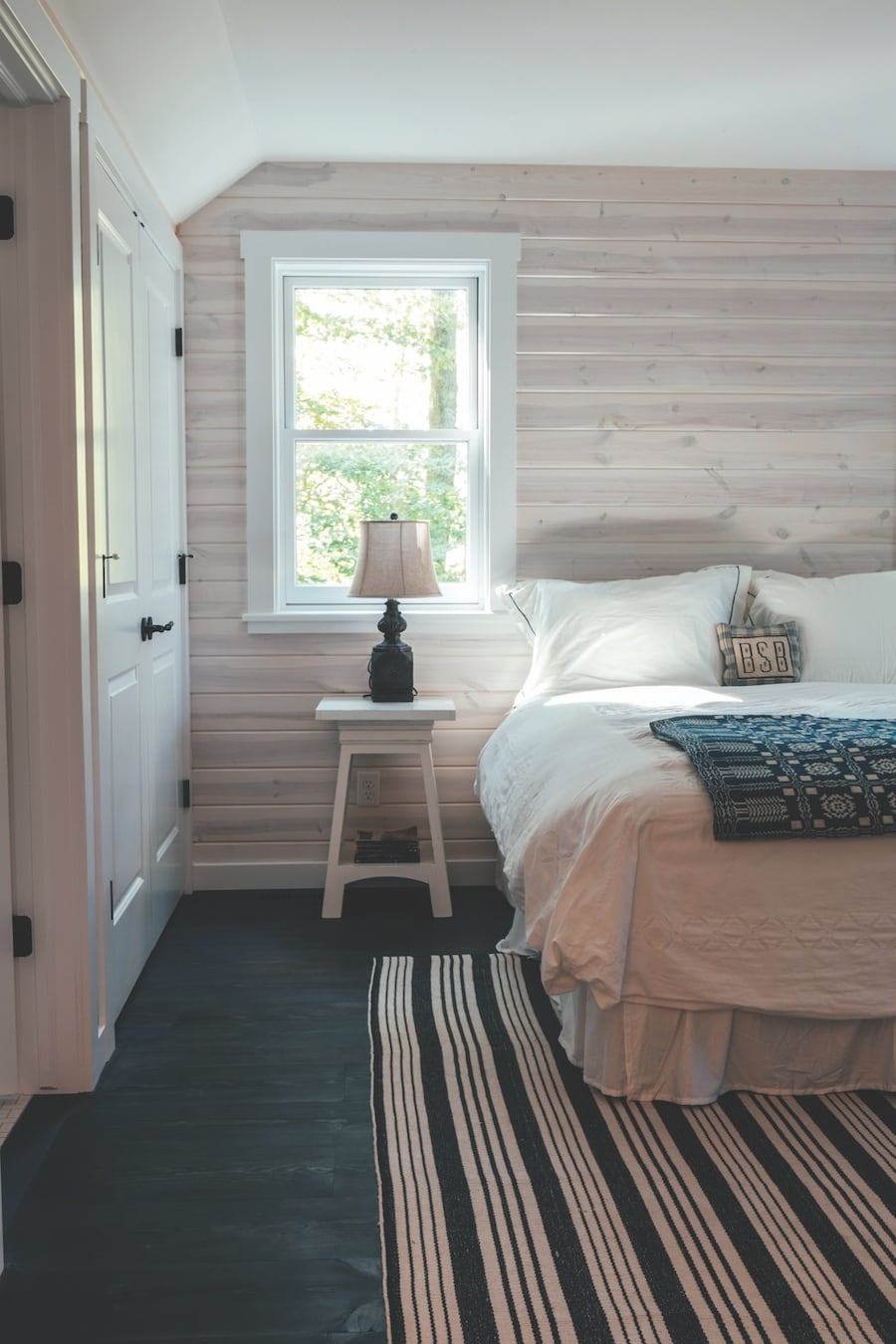 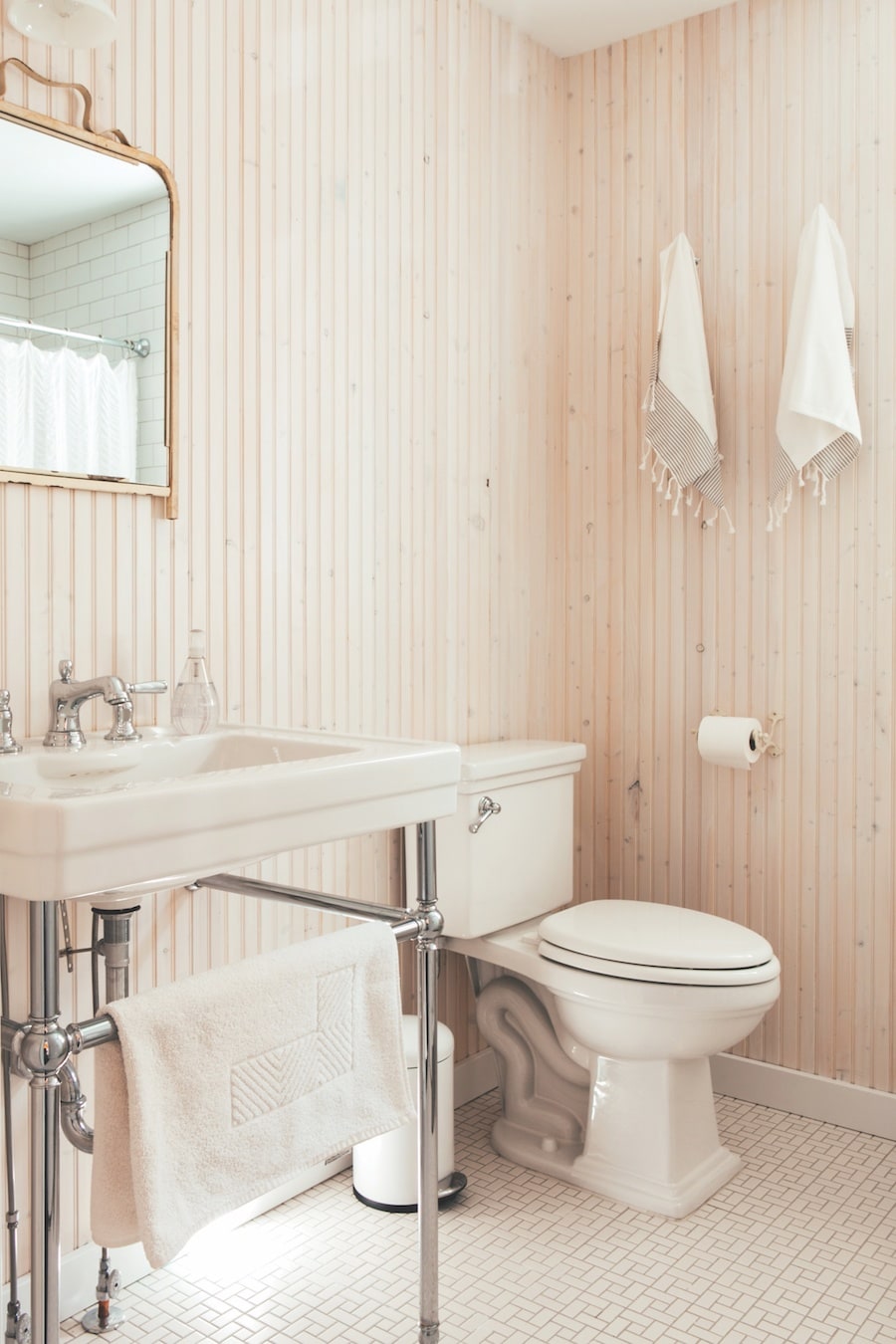