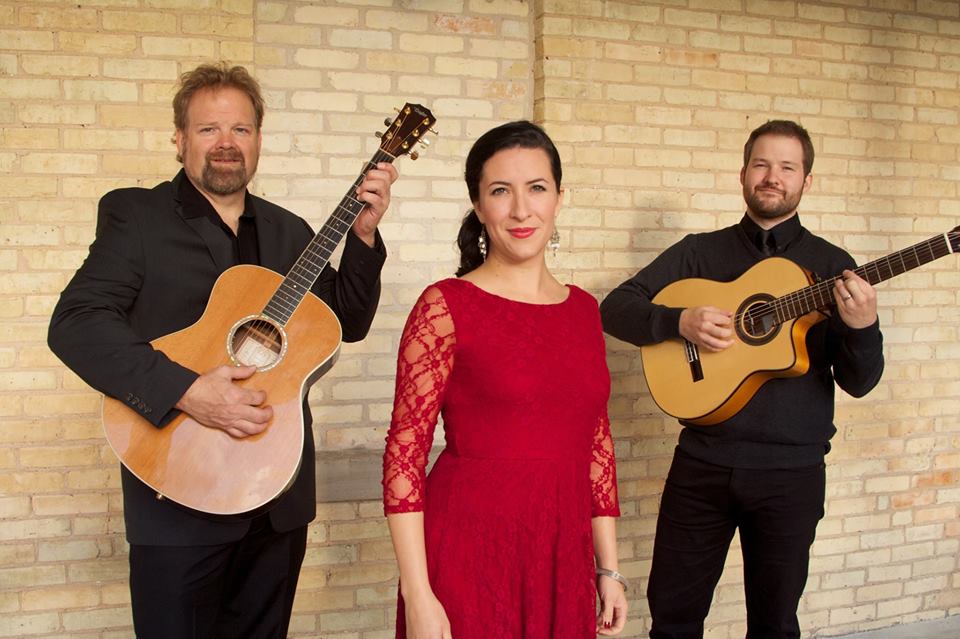 Younce Guitar Duo and Miriam Pico will be bringing the soulful sounds of jazz and the melodic rhythms of world music to a Northern Michigan music event on Sunday, December 6 at 3 p.m. at the Historic Town Hall in Elk Rapids. Guest author Sean Twomey of Second Circle Productions shares the backstory and inspiration behind the Younce Guitar Duo and this Northern Michigan holiday concert.

A Musical Family Share’s its Holiday Tradition by Sean Twomey

The Younce Guitar Duo is a collaboration between Jerry Younce and his son, Ryan. An instrumental duo, they have been performing acoustic improvisational music that is influenced by jazz, gypsy guitar, flamenco and other world music, including Celtic and Latin rhythms. The joy and enthusiasm they have while playing their music is infectious, and their relaxed yet energetic manner is a testament to their musicianship. The duo easily wins over audiences with the dynamic sounds of their richly layered guitar work, and the sense of warmth and community at their shows explains why a large portion of the audience will regularly travel around the area to see them perform.

The father–son bond that Jerry and Ryan share has been instrumental in shaping their unique sound. Jerry says, “I have a great time playing with Ryan, our ability to read each other and understand where we are going with a piece of music and interact and play with each other is really really special” His admiration for his son is illuminated on stage, and the admiration is mutual. Ryan credits his dad for much of his musical inspiration, “Of course my father was an influence. When you’re 14 and struggling with a piece of music and your dad can play anything, you’re always striving for that.”

Born and raised in Detroit, Jerry started performing at age 16. By the time he turned 19, he was already an active player in the Detroit jazz scene and had a dedicated group of guitar students under his tutelage. He took advantage of every opportunity to hone his musical skill and knowledge, including enrolling in Jazz Studies at Wayne State University and studying under the direction of jazz guitarist William Leavitt through the Berklee College of Music.

At that time, Detroit was alive with inspiration and Jerry got to see many of his idols, including the great jazz drummer and band leader, J.C. Heard, who played with Dizzy Gillespie, Lena Horn, Cab Calloway, George Benson. In addition to the established jazz legends, there were a number of up-and-coming guitarists who were not much older than himself, such as Earl Klugh, who would later win a Grammy.

Jerry immersed himself in the music scene. A favorite venue was the esteemed Baker’s Keyboard Lounge where he first saw legendary jazz guitarist Kenny Burrell. “I sat in Baker’s Keyboard Lounge just a few feet from Burrell,” beams Jerry. “I was mesmerized, my eyes glued on him. During the set break, I felt a hand on my shoulder and heard a voice say, “You’re a guitar player, aren’t you kid?” It was Burrell. Jerry laughs. “I felt like I was touched by Jesus.”

Jerry learned that some of the best show bands in the Midwest were coming in and out of a small Northern Michigan resort called Brownwood Acres on the shores of Torch Lake. He jumped at the opportunity to live in northern Michigan and do what he loved most. He settled near Eastport and became a member of the resort’s band. It was another learning experience for the young musician as he continued to explore musical genres while performing with the many touring musicians and vocalists. When his son Jesse was born, Jerry decided he needed to pursue a more predictable lifestyle in which to raise his family. For the next twenty years, he owned and managed several businesses in northern Michigan and completely stopped playing music professionally.

A Young Musician (or two) is Born

Fortunately, Jerry didn’t completely give up music. He continued to play guitar at home and introduced his sons, Jesse and the younger, Ryan, to music from an early age. “My father was and is quite literally music,” remarks Jesse. “It encompasses his entire being. He was always making music.” It should come as no surprise, growing up surrounded by their father’s guitar playing and love of music that the boys would inherit Jerry’s enthusiasm.

Ryan reflected on his introduction to the guitar. “I probably started playing by picking up my brother’s guitar, doing something I wasn’t suppose to be doing,” smiles Ryan. He and his older brother, Jesse, played in a punk rock band before forming the alternative rock band, Escanaba Firing Line, in 2002. The two brothers sang, played guitar and recorded original music with the band. It was a departure from the music their father was playing when he was their ages, but their father’s influence was definitely apparent in Ryan’s music collection, which was seeded with CDs by his father’s idols: Kenny Burrell, Miles Davis, Grant Green and Joe Pass among others.

A New Sound is Born

Sometime in 2008, Ryan booked a gig at Short’s Brewery in Bellaire and asked his dad if he would play with him. The audience’s overwhelming response to their music prompted Jerry and Ryan to form Younce Guitar Duo. They discovered that their different musical backgrounds and approaches were complimentary. Ryan explains, “It really is a fusion of all these sounds from the cultural places around the world. Jazz from America, Latin America and some Celtic sounds get flirted with.” These sounds and influences, collected by Jerry and Ryan throughout their careers, have become incorporated into the unique sound of the  Younce Guitar Duo. Their sound, highly sculpted and textured rhythms and melodies, is pleasing and accessible to audiences of all ages. Their rich stylings and warmth makes the duo a perfect choice for a variety of venues and events, including brew pubs, weddings, concert halls and outdoor festivals.

The duo is now focused on recording their first CD of original music, and are recording another CD of Christmas music to be released during the upcoming holiday. They also plan to tour more broadly in the coming year. “One of the things we lacked was quality video recordings of our performances so that we can approach venues outside the state,” said Jerry. “We are now in the position to make these things happen.”

Traverse City filmmaker, Rich Brauer, will be shooting the Younce Guitar Duo’s concert at the Cheboygan Opera House in January. Joining the duo will be percussionist Chad Sturdivant, percussionist Ty Mathews and bassist Andy Evans. Jerry is particularly excited about this show, saying that “The venue is spectacular and we will have an entire set of new music, some off our new CD, to share with the audience.”

A New Member to the Younce Family

A couple years ago Jerry was watching a television program on the local public access channel and saw an interview with a singer/songwriter from Traverse City. Feeling that there was something special about the vocalist, Jerry prompted Ryan to contact her about collaborating with them. That singer was Miriam Pico and she and Ryan were married this past summer in a small ceremony at Jerry’s home.

The Younce Guitar Duo is strictly an instrumental group, but they perform with Miriam as a guest vocalist at a few special events during the year. The upcoming Holiday Concert with Younce Guitar Duo and Miriam Pico is one such event. The holiday concert has become a Younce family tradition, and this year’s concert is especially meaningful because it’s the first year that Ryan, Miriam and her children will spend Christmas as a family. They are looking forward to sharing the magic and joy that brought them together with audiences during this festive time.

Purchase tickets for this Northern Michigan music event at MyNorthTickets.com.