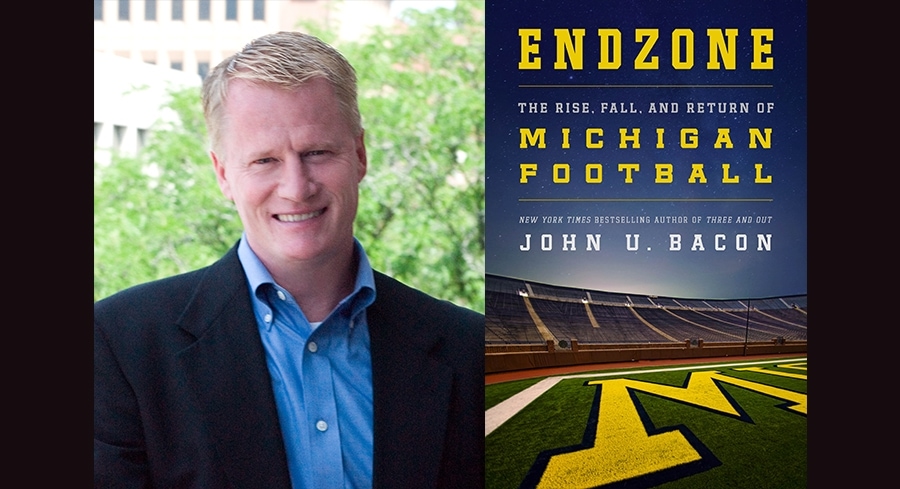 New York Times bestselling author John U. Bacon will take the City Opera House stage in downtown Traverse City on December 3 at 7 p.m., with doors opening at 6 p.m. The Traverse City event showcasing the inside story of the U-M football program will feature live music, a cash bar, and tasty delicacies from Morsels. Ticket prices start at $5 for students plus fees. For tickets, please call 231.941.8082, go to the City Opera House Box Office (Monday-Friday, 10 a.m. to 5 p.m.), or buy online at www.nationalwritersseries.org.

James Sills, a University of Michigan graduate, fan, and writer who resides in Empire, caught up with author John U. Bacon to pose some tough questions about his book, Endzone: The Rise, Fall, and Return of Michigan Football, and the amazing turnaround of U-M football. Here’s the Q&A.

The University of Michigan football season was going poorly in 2014.  There was rumbling that the head coach should be fired from the much-storied program that had definitively hit bottom.

It was a tough comeuppance for a legendary program that once bragged about tallying more total victories than any other college team in the nation. Fingers pointed toward Dave Brandon, the athletic director who took control of the well-oiled U-M Athletic Department in 2010. When Brandon first arrived, he trumpeted his infamous motto: “If it ain’t broke, break it!” Now the football program was indeed broken, and Brandon was under fire. Students protested and stopped attending games (their numbers dropped by half), alumni athletic donations dried up, and former players openly talked about the need for a new AD.  On top of this, the university had just hired a new president who knew nothing about Big 10 sports.  While U-M fans fumed, the Michigan State University faithful wore a wide grin.

So what to do? The U-M faithful decided they had to come to the rescue. Groups of alumni, fans, and former players plotted behind the scenes to entice San Francisco 49ers coach Jim Harbaugh to return to Ann Arbor to take over the team.

Whether you bleed “maize and blue” or “green and white” or just love football, you will want to hear John U. Bacon describe these improbable events in his newest book, ENDZONE: The Rise, Fall, and Return of Michigan Football.

John is a U-M graduate, faculty member, and overall master of all things sports in Ann Arbor.  He has written numerous books on sports including New York Times best sellers Three and Out and Fourth and Long.

Jim Sills, a U-M graduate, fan and writer who resides in Empire, caught up with John U. Bacon to pose some tough questions about his book and the amazing turnaround of U of M football.

Jim: Despite his history of being a Michigan athlete, graduate, regent, and donor, Athletic Director Dave Brandon dismantled many long-standing systems and practices in the Athletic Department. However, it was evident that he truly loved U-M athletics.  Help us understand why he did what he did and the consequences.

John: Well, that’s the $1.2 million question, I suppose. It’s quite clear, in the book and elsewhere, how much Brandon loves Michigan. He has proven it with his generosity, his hard work, and the sacrifices he’s made for his alma mater.

His fundamental mistake, perhaps, was confusing Domino’s Pizza for the Michigan athletic department. If all you have is a hammer, the world looks like a nail. If you are the CEO of Domino’s Pizza, and your long-stated philosophy is “If it ain’t broke, break it!” taken from a popular 1992 business book of the same name, that is probably what you’re going to do. In short, Brandon seemed to believe the same approach he’d used at Domino’s would work at Michigan Athletics.

And here’s the bottom line, which applies to every major college football power: your department needs to be run on sound business practices, but you need to remember that the people who keep it running — the players, students, lettermen, alumni and fans — don’t see it as a business, but a secular religion. And if you lose them by pricing them out, you’re not likely to get them back with fancier communion wine.

Jim: AD Brandon eliminated the long-standing cohort student seating, replacing it with the current, much hated general admission seating. What is the plan to restore student seating to its original structure of freshman, sophomore, junior, and senior sections? What are the implications of this issue in regards to the loyalty of current students and graduates to Michigan football, as well as the University, now and in the future?

John: Perhaps Brandon’s biggest strategic mistake, aside from pushing out 143 of 260 employees, was instituting the general admission seating policy for students in 2013. This not only meant seniors were no longer guaranteed the best seats, but that students of all ages couldn’t send in their applications as a group, so they could sit with their friends during the games. As student Jay Sarkar said, “I cannot wait to get out of Ann Arbor and not donate to this cash-hungry school for a long time. David Brandon and Hunter Lochmann, whether they like it or not, are antagonizing and alienating the student body. Do they expect me to send my kids here in 20–30 years and buy season tickets for them? This is how you make money now and lose money in the long term.”

A week before Brandon abruptly resigned, however, he reduced the price of student season tickets from $295 to $175, instituted a discount for students on financial aid, and stuck to the hybrid system of seating they had created with the help of student government leaders. Hackett has continued with these policies for the 2015 season. Student ticket sales have shot back upward, roughly to their previous levels, thanks partly to the new policies, and the arrival of Jim Harbaugh, of course.

Jim: It seems like the “perfect storm” of bad things had to happen in order for Jim Harbaugh to return to the University of Michigan. Tell us the highlights of the “amaizing” story.

John: One of the most common reactions to the book has been, “I had no idea how many things had to fall into place, both good and bad, for Michigan even to have a chance to land Harbaugh.” Neither did I, until I started conducting the interviews. First, Michigan had to suffer countless setbacks, on and off the field, for both Brandon to resign, and Hoke to be fired. Then Michigan had to hire an A.D. who could land Jim Harbaugh. President Mark Schlissel hired that man, Jim Hackett, before they had even met in person. Then Michigan needed the San Francisco 49ers’ owner and general manager to seemingly go out of their way to alienate Harbaugh, and the 49ers to miss the playoffs, which they did.  Finally, Michigan’s lettermen, Regents and others had to help ensure Harbaugh’s return by flooding his phone with messages and calls from famed Michigan Men, urging him to come back to Michigan to restore the program. You add it all up, and that’s one hell of a moon shot. But they made it.

Jim: When Dave Brandon fired many established Athletic Department employees, much of the “Michigan sports culture” was lost.  How will Michigan restore the invaluable interpersonal relationships, practices, contacts, and intangibles?

John: Great question. Hackett has already hired Jim Betts, a star player under Schembechler, to serve as Michigan’s first paid liaison to the lettermen, and a full-time PR man in Kurt Svoboda, and veteran PR man Dave Ablauf is back with the football program – all smart moves, I believe. But none of the 143 employees Michigan lost in the Brandon era are coming back, it seems, and probably no sweeping personnel changes will take place until Hackett is either named the permanent AD, or a successor is named. Hackett was a 20-year CEO of Steelcase Furniture, and he knows such big moves should only be made by a permanent A.D.

Jim: Looking at where the football team was a year ago and where it is now, most people would agree that Coach Harbaugh and his coaches have done a superior job.  What is your assessment of the football program, the Athletic Department, and what the future holds?

John: There are still serious issues that Michigan athletics needs to address, as you noted above, but it’s amazing to see how Michigan went from one of its lowest points, on and off the field, to one of its highest, in just one year: from a family filled with disgruntled students, lettermen and faculty to a packed house of happy fans, cheering on a competitive team.  That shows you just how important good leadership is.

Jim: Your book delves into the personal and professional lives of many people involved in Michigan athletics.  Sadly, some bad things happened to some good people.  Tell us how Dave Brandon, Brady Hoke, and Will Hagerup are doing now.

John: Dave Brandon took a $3 million buy-out, to be paid over several years, but the payments stopped in June. That’s because Toys-R-Us named Brandon the next CEO, with a base salary of $3.75 million, a one-time signing bonus of $4.25 million, and the chance to receive an annual bonus of $4.5 million, plus other incentives which could add up to $50 million over the next few years. Brady Hoke also received a $3 million buy out, for a total compensation of $17 million for his four years at Michigan. He is now doing radio, while looking for his next coaching position. Will Hagerup earned his degree, and is now working for Fox Sports in Chicago. He just got engaged to a very sharp young woman, and he is happily pursuing his dreams.

The ones who have not fared as well, in many cases, are among the 143 employees who left the department during Brandon’s four year run. Many have landed on their feet – like Joe Parker, who’s now the AD at Colorado State – but many if not most are no longer in college athletics, and some are still looking for work.

Jim: You were able to write your book (even as the events listed above were unfolding) and get it published within 6 months.  This has to be some kind of record!  Tell us how you did it.

John: This answer is easy: A lot of great help from my editor, Marc Resnick, my wife Christie, and dozens of good, smart friends — and very little sleep! The last three months, I was getting about four or five hours a night, which is not healthy, but that’s what it took, and I’m glad I did it. The book has been very well received.