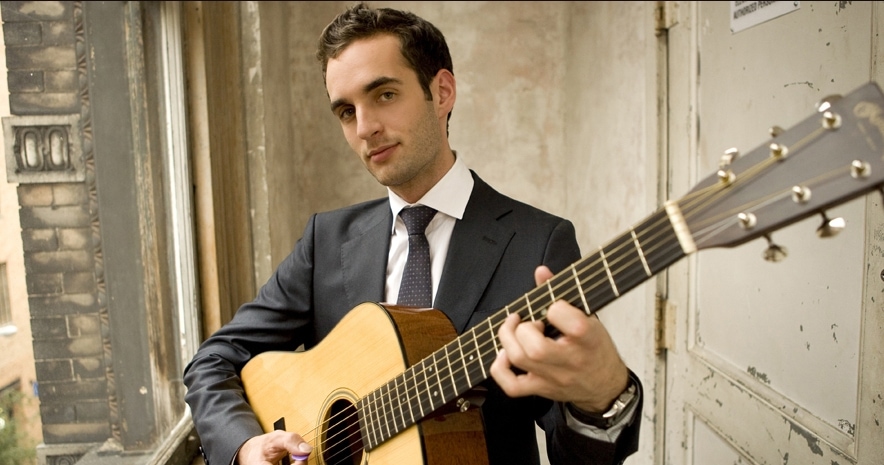 Guitarist Julian Lage goes back in time with his Interlochen performance on November 17. MyNorth Media entertainment writer Ross Boissoneau introduces us to Lage and his trio prior to their Northern Michigan event.

The music of the 20s has seen a renewed interest of late, with everyone from Roxy Music frontman Bryan Ferry to outfits such as the Hot Sardines reviving and remixing the sounds and songs of the so-called Jazz Age. Add guitarist Julian Lage to that list, with his latest recording, World’s Fair. “It’s covers of songs from the 20s and originals,” said Lage.

Lage (pronounced Lahzh) will be performing music from that solo recording November 17 at Interlochen as well as other material, spicing it up by performing with a trio. That’s perhaps to be expected, as Lage’s talents and interests have always crossed boundaries. He’s played everything from post-bop jazz to bluegrass, classical to electronica.

While World’s Fair and indeed most of his output focus on his skills on the acoustic guitar, on this tour he’s playing a Fender Telecaster. He plays the popular solid body electric with no effects. He said his choice of instrument is derived in part from the pre-jazz stylings of the era. “It’s reminiscent of the 20s, sophisticated yet straightforward,” said Lage. “The Telecaster was the first guitar that everyone had access to.”

Lage first began playing guitar at age 5 alongside his father, who had taken up the instrument just a year before. “I wanted something to do with my dad. He’d take lessons and we’d both benefit,” said Lage. The younger Lage surpassed all expectations, and before his teens he was playing alongside elders such as Carlos Santana, Pat Metheny and Kenny Werner. He made his first recording at age 11 with David Grisman, but that was already three years after he’d been featured in the Oscar-nominated documentary Jules at Eight, noting his prowess.

Though he asked for a guitar when he was 4 years old, Lage had to wait a year. After picking up a guitar at age 5, Lage was soon recognized as a child prodigy. That led to filmmaker Mark Becker’s documentary Jules at Eight, which chronicles the second-grader as he goes from the playground to gigs.

“I was constantly astonished at how musical he was, how mature he was and how fast he was growing and learning and all. I consider him one of the most amazing musicians I’ve crossed paths with in my career.” – Vibraphonist Gary Burton

“This is as impressive a debut recording as you’ll hear from the plethora of jazz guitarists who dot the landscape. Its diversity, depth of character, and high level of musicianship bode well for the future of Lage – a legitimate rising star.” – The All Music Guide

Dendrinos Chapel and Recital Hall, Interlochen Center for the Arts

Tickets are $32 and can be purchased at tickets.interlochen.org