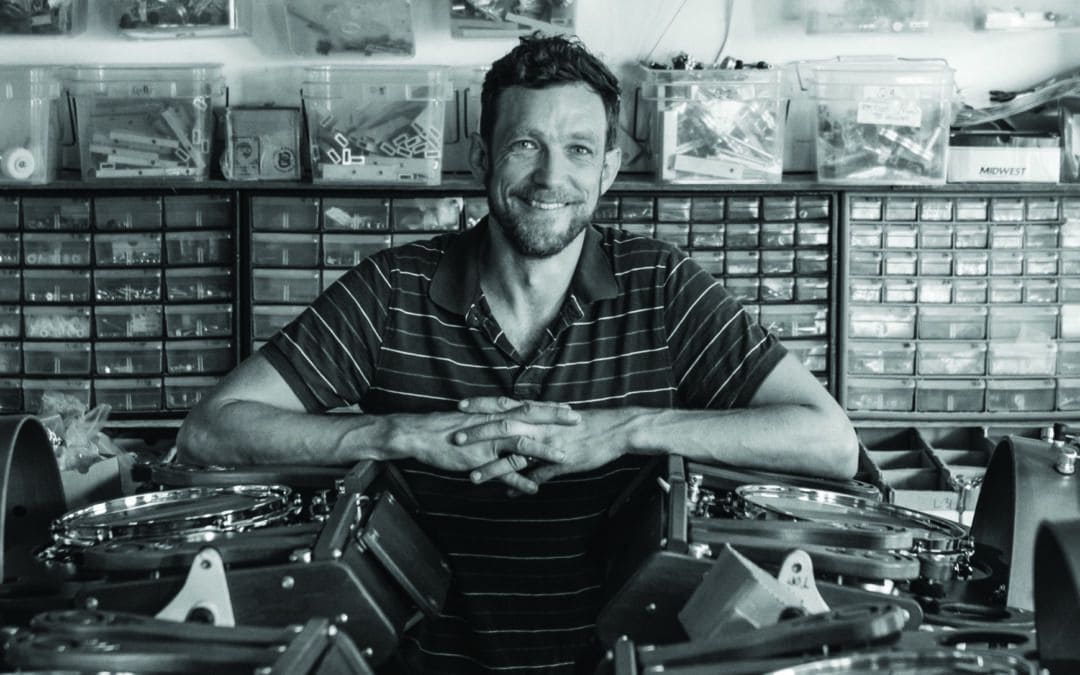 A Cedar craftsman sells his products all over the world. MyNorth Media contributing writer Tom Carr tells us the tale of Pete Farmer’s drum kits and the part they play in the Northern Michigan music scene, with a feature originally published in the November 2015 issue of Traverse, Northern Michigan’s Magazine.

Pete Farmer began making drum kits to wear on his back or operate with his feet when he lived near Seattle. When the Great Recession hit, he was laid off from teaching and began making and selling them full-time. He moved to Cedar two years ago, and now Farmer Foot Drums sell all over the world.

What gave you the idea?

Just to play music. Just for fun. I have busy feet. I was a runner all through college. I have a lot of busy energy in my body, and that’s one way that it seemed to come out in a natural way.

Do you see your drums as more novelty or serious instrument?

This concept of a one-man band has been considered a novelty to a lot of people. But our goal is to make instruments that really have a valid look and a valid sound to them. Some performers try to promote the silliness of one person trying to do as much as they can, and that’s okay. The sound is the first and primary function of these instruments. And secondarily, it’s got to look good.

What are the most surprising musical instruments or styles you’ve heard played with your drums?

We shipped a foot drum to a customer who’s going to use it with an accordion in Germany. We’ve had customers use it with a trumpet. We’ve had people who just play a harmonica, so they have the smallest instrument in their hands, that nobody sees, and then they have this big drum at their feet. Singing and rapping.

Does the music scene here complement your business?

Yes. I think a lot of people have that wintertime escape into themselves to create music. And I see a lot of musicians trying to make a living during those scarce months of boom times in the summer, and the way to do that is to have a really exciting and engaging show.

Which is more popular, the Backbeat (backpack drum) or the Foot Drum?

The Foot Drum. It’s the most unique. The backpack, we sell probably a quarter as many. But by far, more people have played that historically, through time and cross culture, and all that. I think it’s got the biggest room to grow, because people know it. You think of Bert from Mary Poppins, and he’s got that backpack thing. There are a couple performers around here that have them, and they definitely get a lot of looks. It’s an eye-catcher.

How do people hear about your products?

When somebody plays a foot drum, everybody notices. So every person we’ve sold to has been a great person to use as our own advertising piece. [In Google] anybody who types in foot drum, foot percussion, they‘re going to find us.

Where are your customers?

Every now and then when we send something to Singapore, Pakistan, New Zealand, Iceland, I do kind of Google them to see what’s happening in music in that area. There are one-man bands in Africa and South America, and it’s great to put a little piece of Cedar, Michigan, under their feet all around the world.