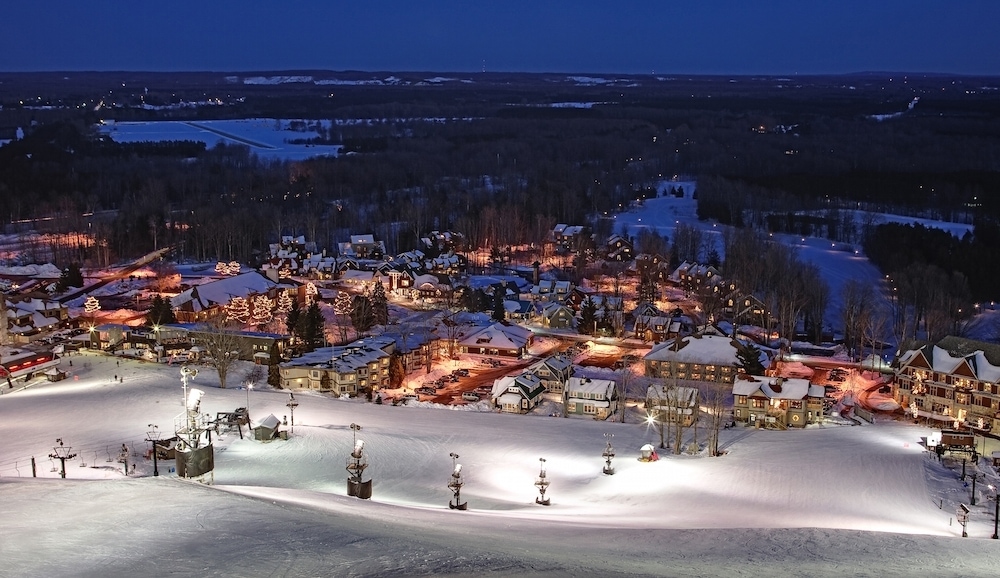 THOMPSONVILLE:  The winter season approaches and with it, eight new trails for Northern Michigan skiing and snowboarding, nine new miles of fat bike trails and an $11 million expansion at the very center of the Crystal Mountain village:

Crystal Mountain’s downhill trail count increases to 58 with the addition of new terrain and a triple chairlift in ‘The Backyard.’ The new ski and snowboard complex will feature a mix of beginner (green), intermediate (blue) and glades runs that take advantage of the natural banks, rises and rollers. A grand opening ceremony is planned for December 18, but skiing and riding will begin as soon as conditions permit – the resort also added six snowmaking machines and nearly one mile of pipe to its snowmaking system as part of this expansion.

In addition to ‘The Backyard,’ construction is now underway on a LEED-certified (Leadership in Energy and Environmental Design), 31,200 square-foot expansion to the Inn at the Mountain, part of an $11 million project. The resort broke ground at the site in early October with completion anticipated for late fall 2016, just in time to begin Crystal’s 60th Anniversary Celebration. The transformative project taking place in the very center of Crystal’s village will include 25 new hotel rooms and suites, an open-air, rooftop terrace and, on the main level, a lobby bar and specialty market surrounded outdoors by the beautiful Village Plaza.

Crystal Mountain is expanding its Fat Bike trail system by three miles on-property and partnering with the Michigan Department of Natural Resources to groom six miles of the Betsie River Pathway for winter biking. Riders can connect to the Betsie River Pathway exclusively via Crystal Mountain’s Aspen trail. Additional single-track for intermediate to advanced riders will also be opened on the resort’s Pineapple trail loops.

Research indicates that 40-percent of Americans get less than seven hours of sleep – an hour less than the recommended eight. Crystal Spa’s new Sleep Massage offers the chance to catch up. The 50 or 80-minute service begins with a Quiet Mind Flower Elixir and Energy Mist and features long, slow massage strokes, focusing on two universal stress points of the body: head and feet. Designed to create a state of deep relaxation, additional nap time at the end of the service can be scheduled at the time of the reservation.

If you’re going to learn to ski or snowboard, why not make it a world record event? Crystal Mountain will be joining over 120 ski areas around the nation in an attempt to set the Guinness Book of World Records mark for largest ski and snowboard lesson. The event will take place January 8 at 10 a.m. and costs $10 per person (rental not included) as part of National Learn to Ski and Snowboard Month..

Crystal Mountain is among 34 ski areas nationwide, and only two in the Midwest, taking part in The Climate Challenge, a National Ski Areas Association initiative to advance sustainable practices and reduce carbon emissions. Now in its fifth year, each ski area takes inventory of its carbon footprint, sets a reduction goal, implements a strategy to reach that target, works with leaders and legislators on climate related issues and public policy, and then submits a final report to the program and the public. Crystal has long been committed to environmental stewardship and the use of more sustainable energy practices which, in part, earned it recognition as “Energy Innovator of the Year” during the 2015 Governor’s Energy Excellence Awards.