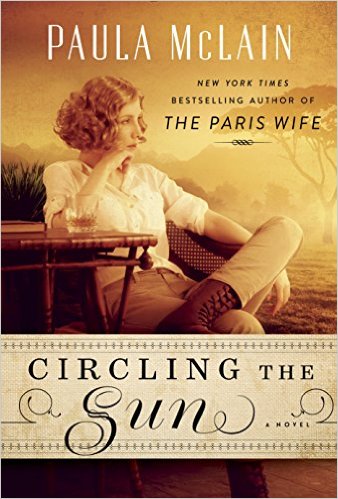 McLain is the New York Times bestselling author of The Paris Wife, which poignantly portrays the troubled marriage between Ernest Hemingway and Hadley Richardson in post-war Paris. Her newest book, Circling the Sun, once again focuses on a captivating love triangle—this one between daring aviator Beryl Markham, safari hunter Denys Finch Hatton and Karen Blixen, author of the classic memoir Out of Africa.

Beryl—the first woman to fly solo across the Atlantic from east to west—once famously said, “Life has to move or it stagnates … Every tomorrow should not resemble every yesterday.”

McLain is returning to the Traverse City National Writers Series for an up-close and personal conversation about this stunning new book. Author, actor and illustrator Benjamin Busch will host the event. Here he provides a warm-up with the following Q and A.

Busch: Your beloved novel The Paris Wife is born of your fascination with Ernest Hemingway and his first wife Hadley Richardson. You’ve said it was inspired by reading Hemingway’s memoir about that period, A Moveable Feast. With your new novel, Circling the Sun, you take us to colonial Africa and more actual historical players. Both take place in the 1920s. What is it about this particular era that speaks to you?

McLain: There’s definitely something about the period between the wars that draws me, and perhaps more than any other. The upheaval and sense of precariousness raised the stakes for living and drove some to exist more intensely than they ever had, risk more, stretch more and explore more urgently the sharp edges of themselves and the world. That’s fertile territory for fiction, for sure. I also love—and hear pretty readily—the dialogue of this period. I can’t say why, but it comes naturally to me.

Busch: What is it about the past that lures you to write fiction about real people?

McLain: A reader once told me this genre is like a living wax museum, and that really struck me as true. If readers like being swept away into other worlds— dramatically, intimately, through a very particular point of view—well so do I. I’m addicted to it, in fact! I learn so much…about racehorse training in 1920’s Africa, for instance, early aviation, bush piloting, the habits of elephants, varieties of tribal dancing, equatorial weather patterns, and on and on. The fact that the events I’m exploring actually happened, and that the character I’m inhabiting actually lived, supercharges the endeavor for me, and gives it greater import, greater responsibility.

Busch: What do you do at home, in your workroom, to feel the world 95 years ago?

McLain: Everything I do is aimed at dissolving my actual world and making my desk (or that chair in a coffee shop) a time machine. I read obsessively, write with intensity, so that everything else falls away. Often I listen to period music—or in this case, the soundtrack from Out of Africa, over and over. I build feverishly, taken over. It’s like falling in love a little, so that I really don’t want to think about or do anything else in those months when I’m drafting … and my children will tell you I’m sort of worthless on the laundry and shopping front then!

Busch: Did you visit modern Paris to research The Paris Wife, or Kenya to write Circling the Sun?

McLain: I visited both places, yes, but only after I’d finished the bulk of the writing. With my first book I was dead broke because I’d quit my teaching job to devote myself to the book and the practice of writing flat out. Conjuring Paris, dreaming it, plunging myself there with each day’s writing was like nothing else I’d experienced—a whole world opening up. I’m a big believer in the generative power of the subconscious. Richer magic can happen in the dark than in the light: maybe it’s that. In any event, the process worked so well I didn’t want to fiddle with it when I began to work on the Africa book, but when I finally did go, I can’t tell you how special it felt to follow in Beryl’s footsteps, to stand where she stood—it meant more than it would have had I gone for a more traditional notion of research. Because I’d been living with her and felt so connected to her life and story.

Busch: How do you know you have the right voice for these people?  Did you read their letters and journals until you heard their language and felt their sensibilities?

McLain: I did do lots of reading to get the style and tone of each book right. Beryl’s voice in West With the Night most decidedly kick-started something in my imagination, so that I began to hear a companion voice, not hers exactly, and not entirely mine, but something in between. The same thing happened when I read Hadley’s love letters to Ernest. I didn’t try to mimic her, or do a Hadley impression, but reading those letters gave me the confidence to follow the voice I did hear. It’s a very intuitive process. I somehow learned to trust the voice that comes.

Busch: How do you find the characters to start a novel?  How did the aviator Beryl Markham demand such deep examination?

McLain: I met Beryl in the pages of West With the Night—and though I found her instantly fascinating, instantly worthy of further digging, it wasn’t until I started exploring the facts of her life that I was really riveted. The most dramatic bits of her personal story are almost entirely missing from her own memoir. Those gaps were loud to me, and created a curiosity about what really made this woman tick, as well as suggesting a place for me to go imaginatively. Where she had not gone herself.

Busch: When you wrote your own memoir, Like Family:  Growing Up in Other People’s Houses, did you imagine that one day a writer might read it to get your voice for a novel?

McLain: Ha! That’s a terrifying thought—but it would serve me right, wouldn’t it?

Benjamin Busch’s memoir, Dust to Dust, reflects a complicated relationship between destruction and creation. In themed chapters, Ben reflects on his rural upbringing, his combat training, his relationship with his father—acclaimed novelist Frederick Busch—and, most poignantly, his own mortality, his family and the natural world. “It’s impossible to read any part of this book and not be moved,” wrote The New York Journal of Books.