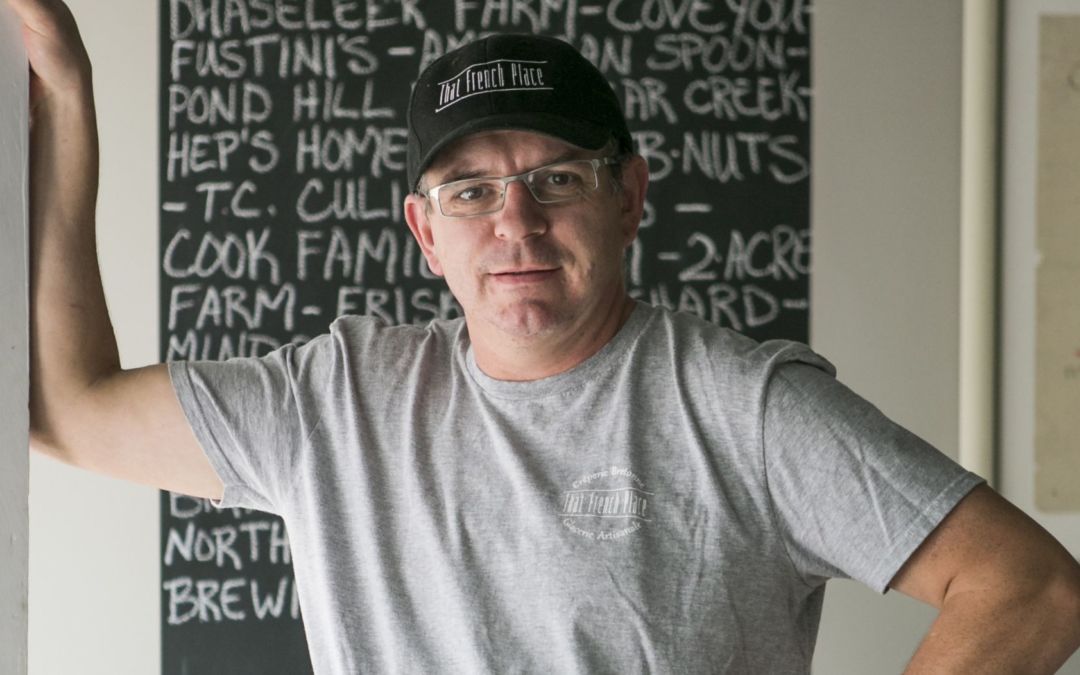 That French Place in Charlevoix is well known for the smell of paper-thin pancakes drifting out its front door. This hot new gastro-destination is a Northern Michigan food find, satisfying the taste buds of many with French pastries and handmade ice creams.

MyNorth’s food & wine editor Tim Tebeau met with That French Place’s chef and owner, Gildas Berrous, to find out more about the crêpes that have made his shop a must-stop Northern Michigan dining experience on every fall color tour, in an article from the October 2015 issue of Traverse, Northern Michigan’s Magazine.

Update: That French Place is now owned by Brian Freund and Emily Anderson.

Gildas Berrou took up baking at age 16 in his hometown of Quimper, Brittany, and apprenticed in kitchens across France to hone his trade. Gildas and his wife, Tara, moved North in 2012 aiming to bake and start a micro farm in Charlevoix County. We caught up with Gildas to eat and talk crêpe anatomy, Anne Boleyn and the right pan for the job.

What’s the provenance of these delicious crêpes?
Crêpes come from a traditional buckwheat flatbread that the people of Brittany used to cook on a stone in the fire. When Anne Boleyn married Henry VIII, she refused to travel without her crêpes and helped introduce them around France.

You use different batters for savory and sweet crêpes, what’s the difference?
The savory crêpes are all done with the traditional batter, which is just buckwheat flour, salt and water. The sweet crêpes, which have only been made for the last hundred years, have wheat flour, eggs, sugar and milk. In Brittany we most often make a buckwheat dinner crêpe with eggs, ham and cheese.

So if we want to re-create That French Place at home, what do we need?
There are lots of good crêpe batter recipes online. For savory crêpes I’ve found the best buckwheat flours are available at food co-ops like Grain Train and Oryana. The pan is very important. It’s best to find a cast iron pan without edges; heat it on medium-high heat, like 350, and ladle on a very thin layer of batter. My favorite is to spread a sweet crêpe with homemade caramel and let it cool for ten minutes.