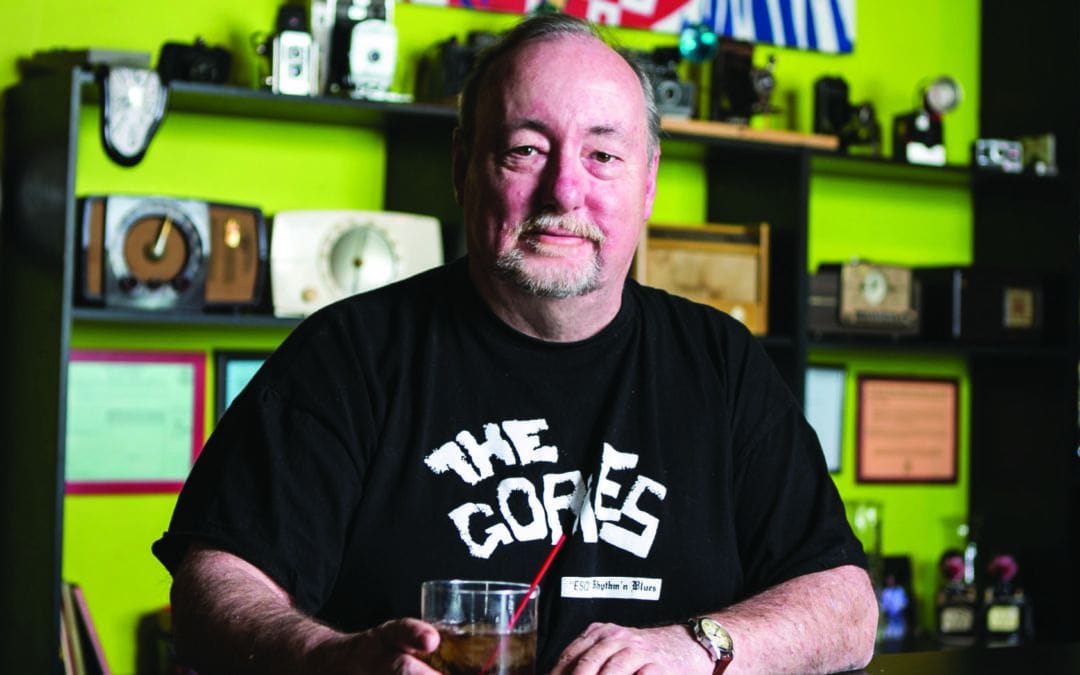 Ben Hamper is a Northern Michigan music buff who spins classic country, soul, funk, and R&B every weekend on WNMC 90.7 FM out of Traverse City. Before that, he wrote a memoir about his days on the GM assembly line in Flint. Tom Carr got to know Ben a little better with this Q&A originally featured in the October 2015 issue of Traverse, Northern Michigan’s Magazine.

It’s Sunday before noon at InsideOut Gallery in Traverse City. People stand in line for bloody Marys and settle in to hear Ben Hamper spinning classic country tunes on a live broadcast of his weekly Head for the Hills radio show on WNMC. Hamper’s country show and his Soul Possession show are among the station’s most popular programs, particularly with on-line listeners. While Hamper is best known as author of the classic Rivethead, a tell-all about his days on the GM assembly line, he’s a music buff who did his first volunteer radio DJ gig in Flint back in the 1980s.

In contrast to much of nonprofit volunteer radio, you make your shows feel like a party. How do you do it?
I always took my show to be an extension of my living room, playing records for friends. Like, ‘look I just dug out this hillbilly song.’ I don’t become a different person when I go down there. It’s Friday night, it’s 9 o’clock (for Soul Possession). I’ve got to provide these people with some gateway to their 48-hour parole from their jobs. I know they’re hitting the liquor cabinet, I know they’re getting cozy in the rec room. I want to be the instigator.

Can you compare the tastes of a Traverse City audience with that of a Flint audience?
Perhaps, a tad less inebriated here. The show I did in Flint was a late-night punk rock show, so you can imagine the audience we had for that. I like the enthusiasm of the Traverse City people. When we first started the hillbilly show, it seemed like kind of a hard sell, like, what kind of hill-jack action are you trying to throw down on us on a Sunday morning? But people warmed up to it, and it’s like, this makes sense on a Sunday morning. This is authentic, rural punk rock, you know.

How large is your music collection?
Most is on a hard drive now, especially the stuff I do for the shows. And then I burn each show separately. I burn three CDs each week. Two for the music and another for the bits I throw in, like movie trailers, quotes from Dragnet, quotes from the Beverly Hillbillies and theme songs and stuff.

What do you want people to know you for mostly, the radio gig or Rivethead?
I guess I don’t really differentiate. I’m thankful for recognition on either front. If it’s agreeable to people, I feel fortunate that they’re into it. I guess right now I’d say the radio, because I’m more immersed in that. Currently Starz (network) is in the process of making a proposal to make a pilot of Rivethead for a TV series. It isn’t inked yet, but so far, it looks good.

Where do you find most of the music you listen to and play on your show now?
A lot of it comes via friends and blogs, and stuff I can download via the Internet. I just have it all self-contained. There’ll probably come a day when I can just drink and sit in my kitchen and do a show. I look forward to that.

How has the digitalization of music affected what you do?
It’s just made it more handy. Anything that’s more inclusive of music, can only be a good thing.