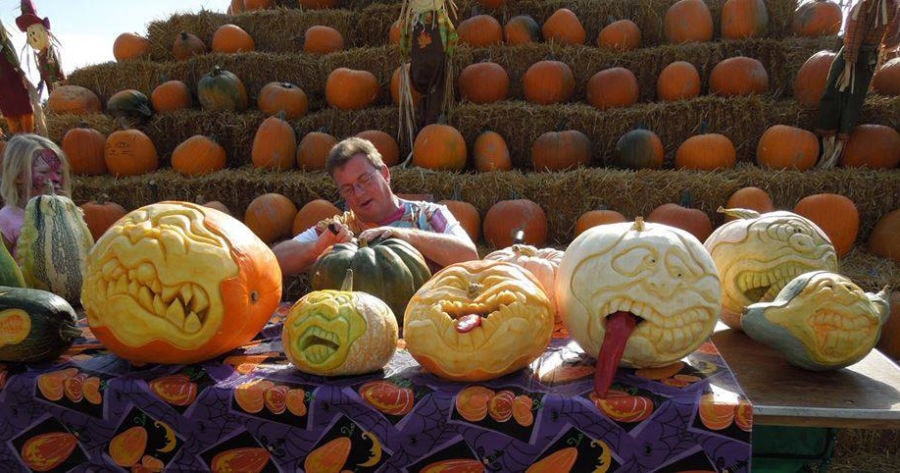 With one slip of a knife a carver was born. And thanks to that “mistake,” fun faces carved on pumpkins by Maple City’s Pat Harrison have entertained people for years. Pat calls himself the Lord of the Gourd—a fun play on words that describes his Northern Michigan pumpkin art.

Every fall he live-action carves pumpkins, squash, and various vegetables across Michigan at libraries, cider mills, farmers markets, and festivals. His audiences range from young to old in the time building up to Halloween.

“I’m like a rock star for two months,” Pat says as he describes his calendar. “I’ve only been home a day and a half the last three weeks.”

So far this season, he’s carved over 400 pumpkins. He expects to hit 500 by the end of October.

Pat encourages others to try the carving craft at home. “My whole secret I tell people is just make it up. Don’t try to make it look like anything,” he explains. “It’s not going to look like you want it to.”

“I’m basically doodling,” he adds with a laugh.

If you’d like to try carving your own pumpkin at home, Pat recommends cleaning out your junk drawer. X-Acto, paring, and pen knives work well. Then he says, “Just let the pumpkin tell you what to do. Use your imagination.”

Want to see the Lord of the Gourd in action and see how a pro handles pumpkins? Here’s Pat’s upcoming show schedule:

Learn more about the Lord of the Gourd’s Northern Michigan pumpkin carving via his Facebook page.