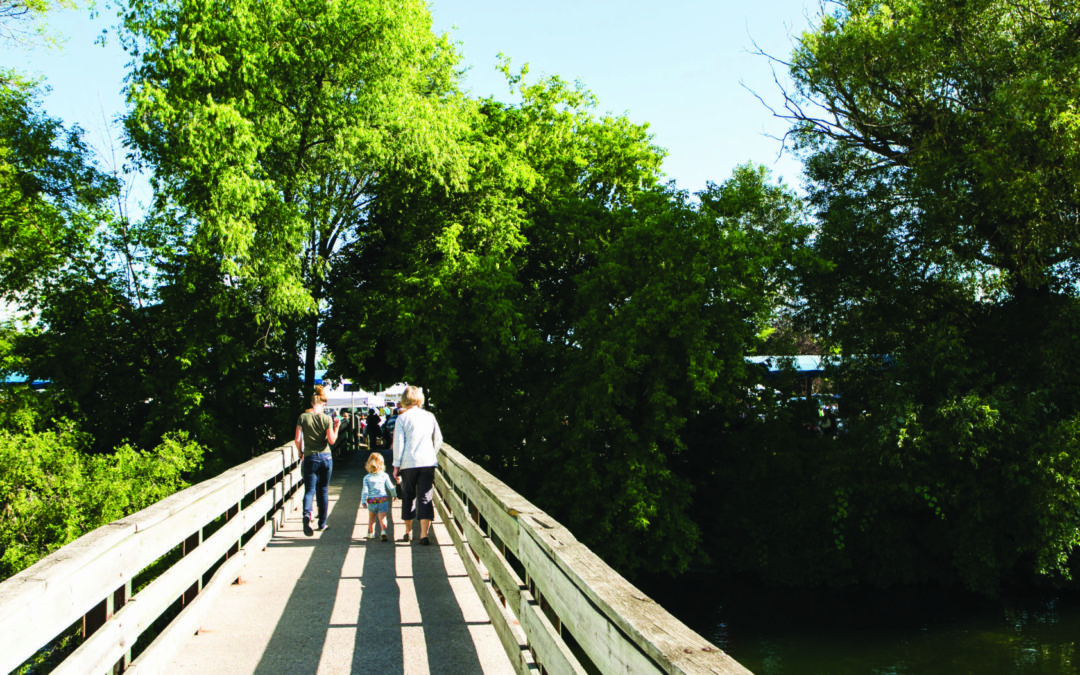 When my Swiss husband and I moved our family to Traverse City from Zurich in 1994, I had lived abroad for 16 years, and the European way of life had become my way of life during that time. Still, I expected to slide right back into being an American in America, to feel at home here just as I had before we left. After all, I was born in the Upper Peninsula and raised in Charlevoix—a true Northern Michigan girl. But I didn’t slide into my American re-entry at all. Instead, I felt like Bill Bryson, when he wrote in I’m a Stranger Here Myself, “Coming back to your native land after an absence of many years is a surprisingly unsettling business, a little like waking up from a long coma.”

I woke up from my coming-back coma more than a little confused and longing for the things I had loved about Switzerland—not just the people and places, but also the emphasis on quality over quantity that pervaded every aspect of Swiss existence. It was particularly evident in the food and dining culture, which in many ways reflected the country’s mindset as a whole. As I slowly rediscovered my new-old surroundings, I looked at them differently. My perspective had changed.

Why, I wondered, in a town like Traverse City, where sunshine is much more abundant than in Central Europe, were there almost no places to enjoy outdoor dining? Zurich is not known for its great weather, but there are al fresco tables at cafes and restaurants everywhere, open from early spring to late fall. And at the first sign of a few warming rays, they are filled with patrons who linger as if they have nowhere else they have to be, leisurely sipping their coffee, wine or beer and savoring each morsel of food. This, in a country known for its industriousness. But also a country that, perhaps because it is small itself, acknowledges the value of the little pleasures in life.

We were in the “Cherry Capital of the World,” but where was the kirsch? I saw dried cherries, cherries mixed into ground beef, cherry baked goods, cherry juice—but no eau de vie showcasing these tart, delicious red jewels. A missed marketing opportunity for sure, but there was something more elemental: Kirsch and other eaux de vie are prized in Switzerland and the rest of Europe as a healthy ending to a meal, usually accompanied by a robust espresso. But neither digestif nor barista were common words in Traverse City’s 1994 vocabulary.

I craved crusty, rustic loaves of bread and airy, flaky croissants, raclette and Appenzeller cheese, and house-made charcuterie with a fascinating array of pickled garnishes. Any combination of these is welcomed as a simple and delicious dinner in Switzerland. Here, big portions and “all you can eat” seemed to be the buzz words.

It wasn’t just the local food and drink culture that felt a bit foreign to me, though. Suburban life—the American ideal—seemed true to the clichés Europeans repeated: sprawling homes and yards, riding mowers and snow blowers, double or triple garages, giant SUVs, mega stores with endless aisles of cereal and packaged foods, and supersized versions of everything from laundry detergent to toilet paper. Football, basketball and baseball mania filled what seemed like every season—on local fields and on TV screens. Nevertheless, in time, my amazement and amusement at all of this evolved into normalcy. I had finally slid back into being an American in America.

And then, when I least expected it, something miraculous occurred: Traverse City began showing signs of an emerging Euro vibe.

As the local wine industry grew and thrived, producing award-winning vintages on a par with European wines, two wineries, Black Star Farms and Chateau Chantal, also started distilling kirsch and other eaux de vie. But the biggest surprise was that people welcomed these new offerings and the traditions surrounding them. Parallel to this, coffee shops offering espresso, cappuccino, macchiato and latte were springing up all over town, catering to an appreciative public.

Stone House Bread led the first wave of the artisan bakery movement, followed by Bay Bread, Pleasanton Bakery, 9 Bean Rows and others. Crusty, rustic loaves—check. Croissants—check—and not just the classic version, but multigrain and pain au chocolat! Customers patiently wait in line to buy them at the farmers market.

Ann and John Hoyt of Leelanau Cheese (who both learned their craft in Switzerland) pioneered local cheese making with—yes!—raclette, and can hardly keep up with demand. Boss Mouse and Idyll Farms have since entered the artisan cheese field as well. My beloved Appenzeller cheese has come to town, too. As if that were not enough to make me yodel with joy, house-made charcuterie and pickled vegetables are now favorites on the menus of several local restaurants.

And wonder of wonders, today soccer attracts almost as many fans here as football, basketball and baseball, although the latter three still dominate the not-so-small screen.

Amid all of this, even local housing choices are going Euro, with a definite trend toward downsizing and urban living. City neighborhoods are seeing increasing numbers of home renovations and new builds, and construction of downtown condos and lofts is booming—all fueled by Traverse City’s increasingly vibrant shopping and dining options, a more pedestrian- and bike-friendly infrastructure, and a wealth of recreational and entertainment opportunities right in the midst of it all.

So where am I now? As Bryson said in the title of another book, Neither Here nor There. In fact, where I am is a hybrid—and to me, it’s the best of both worlds.