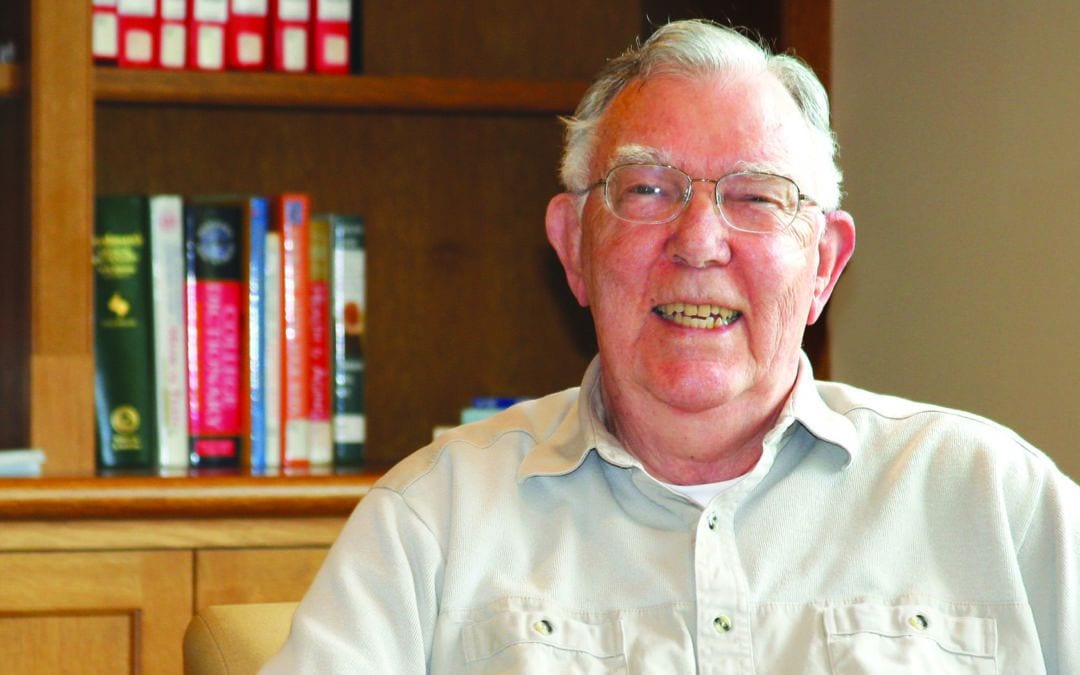 PETOSKEY: Eighty-six-year-old Jack O’Malley of Burt Lake has COPD—or chronic obstructive pulmonary disease—a lung disease that restricts airflow and causes significant breathing difficulties. But don’t expect him to spend his retirement lounging around. Five years ago, O’Malley joined the Pulmonary Rehabilitation Program at the John and Marnie Demmer Wellness Pavilion and Dialysis Center in Petoskey. He is currently part of a Medical Fitness maintenance program there. He’s regularly found using a seated elliptical machine—gym equipment that allows users to exercise arms and legs from a seated position. “If not for therapy, I wouldn’t be able to do many things I enjoy, such as romping with our dogs,” O’Malley says.

O’Malley is a former professor of education and philosophy. After O’Malley retired, he and his wife decided to move to Burt Lake—previously a vacation spot. A big factor in their decision: “We like the array of excellent doctors at McLaren Northern Michigan,” O’Malley says. As examples, he cites his Pulmonologist Dwayne Griffin, DO, and his Internist Paul Blanchard, MD. “They are simply superb doctors,” O’Malley says, “and, in addition, interesting people.”

Though incurable, COPD can be managed, and lifestyle changes like pulmonary rehabilitation and medical fitness can help to control the condition and prevent further damage. According to the Centers for Disease Control and Prevention (CDC), over 15 million Americans have been diagnosed with COPD, though experts believe the number is underreported.

Pulmonary Rehabilitation at McLaren Northern Michigan is geared toward patients with conditions that impact breathing, like COPD, pulmonary fibrosis, and lung cancer. The program includes an initial assessment, followed by three weekly sessions for three months. Each session includes patient education, breathing techniques, and individualized exercise. Oxygen is available for those who need it.

“People often come here with a specific goal in mind, such as being able to work in the garden or play with their grandchildren,” says Exercise Specialist Terry Whitmore, HFS. “Once they achieve the goal, they realize there are lots of other things they can do, as well. They don’t need to let breathing problems hold them back.”

Jack O’Malley is definitely seeing the effects of therapy. “Terry [Whitmore] shares a lot of pragmatic advice with all of us patients,” O’Malley says. “For example, Terry explained that I’ll be able to breathe better at a workbench if I stand upright rather than bend over. The therapists are always concerned about helping us live well in spite of the incapacity that is COPD.”

Symptoms common to lung diseases like COPD include chronic cough and phlegm production; shortness of breath while performing physical activities, especially activities that used to be routine; chest tightness and inability to take deep breaths; wheezing; the need to clear the throat upon waking; frequent respiratory infections; blueness of lips or fingernail beds; and lack of energy. Advanced cases of COPD can also exhibit unintended weight loss. If you or someone you know is experiencing these symptoms, talk to your health care provider for help.

Those who have been diagnosed with COPD and other lung diseases should ask their provider for a rehabilitation program referral or call (800) 248-6777. Information about this Northern Michigan COPD program and other health-related topics can be found at northernhealth.org.