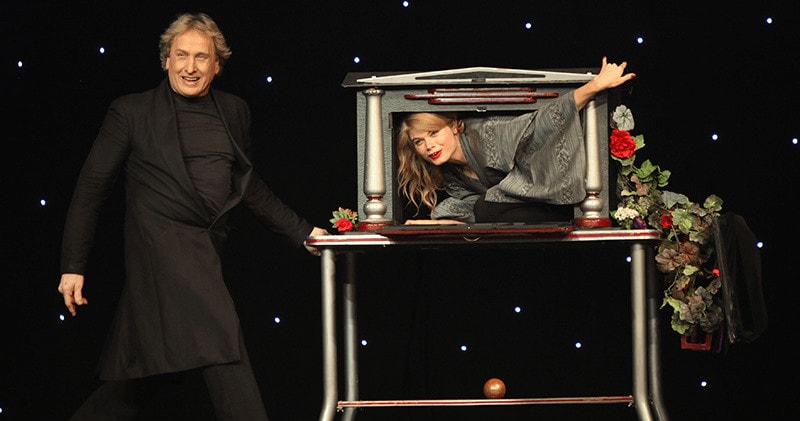 How it Got Started

The show started as a television series broadcast on PAX TV from 2000 to 2001, which was performed on the grand stage at the Magic Castle in Hollywood. The show was revived in 2009 and broadcast on MyNetworkTV. In 2012, MOI was presented as four different specials and run in syndication.

It was revived again last year by the The CW Network, featuring new performers and hosted by Dean Cain. The television show promises it is free of any trick photography or computer magic—it’s the real thing, performed on stage. The companion touring version is the largest magical touring show in the world.

Every magic act ever

Each show presents a number of different illusionists, from comedic to sleight of hand to escape artists. The tour, now in its fourth year, has made hundreds of stops across the U.S. and Canada as well as in Peru, the Philippines and Singapore, with an eight-country European tour in the works.

Among the cast (though not all will necessarily be onstage in Manistee) are Jonathan Pendragon, who has performed at three Presidential Galas in Washington D.C., for the Queen of England, the Prince of Wales and the Royal Family of Monaco and been named Best Illusionist and Magician of the Year by The World Magic Awards; Farrell Dillon, an honors graduate of the Chavez Studio of Magic, the most prestigious magic school in the world, who blends magic, comedy, skill and illusion; Titou, born and raised in Paris, who started performing magic when he was a kid after receiving a magic set on Christmas and by the age of 15 was already performing for private parties and is a member of the elite magic club, The Academy of Magical Arts; and Rick Thomas, a ballroom dance champion turned magician, who has toured over 50 countries and performed his own show in Las Vegas for over 15 years.

“Children are already dreamers. Adults have real life. What Tanya and I do with my special effects is make them dream again.” – Masters of Illusion performer Joaquin Ayala speaking about his act with partner and fiancée Tanya Garofalo

“With its star-studded performance, Masters of Illusion Live! took the audience on a roller coaster ride that never ended.” – the Slate

Tickets start at $35 and can be purchased at lrcr.com.