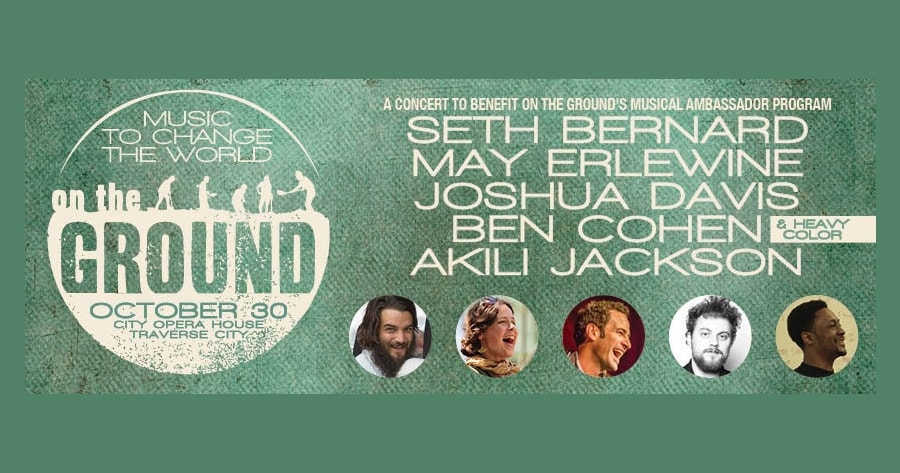 (Press Release provided by On The Ground)

TRAVERSE CITY: Don’t miss your chance to hear NBC’s The Voice finalist Joshua Davis, along with May Ereline and Seth Bernard, live at a Traverse City event! On the City Opera House stage October 30, On the Ground presents “Music to Change the World” in support of their Musical Ambassador Program.

Funds raised by this historic concert—also including performances from Akili Jackson and Ben Cohen (with his electronic performance group Heavy Color)—will help expand On The Ground’s Musical Ambassador Program in the Eastern Democratic Republic of Congo, where many talented youth struggle for creative outlets and a life beyond joining local militias.

All of the concert’s Musical Ambassadors have traveled to one or more of the developing world farming communities OTG partners with. In 2011, Erlewine and Bernard visited Hase Gola, Ethiopia and produced the two-part album New Flower. The following year, Davis ventured through Palestine and created the album A Miracle Of Birds which served as the soundtrack for the award-winning documentary The People and the Olive. This year, Ben Cohen and Akili Jackson, of the Michigan-based electronic performance group Radiant City Arts, ventured to the remote communities of the Eastern Democratic Republic of the Congo for Run Across Congo; a “seven marathons in seven days” expedition by nine women through the epicenter of Africa’s Great War that has seen nearly six million die in the past twenty years.

There, they collaborated with local artists, discovered the songs of perseverance sung by struggling communities and helped water the seeds of artistic expression in one of the most violent corners of the continent. The resulting album and documentary will be inspired by and benefit the women and men working toward gender equality in a region the United Nations has called “the most dangerous place in the world to be a woman.”

Tickets are available by phone or in person at the City Opera House box office and online at www.cityoperahouse.org. On October 30, concertgoers will have the chance to join OTG’s Musical Ambassadors at a separate ticketed, 5:30 p.m. reception. Doors open at 6:30 p.m. for general seating, and the show begins at 7 p.m.

Watch when Joshua Davis visited Traverse City in May with this MyNorth Media video!

Photo(s) by On the Ground