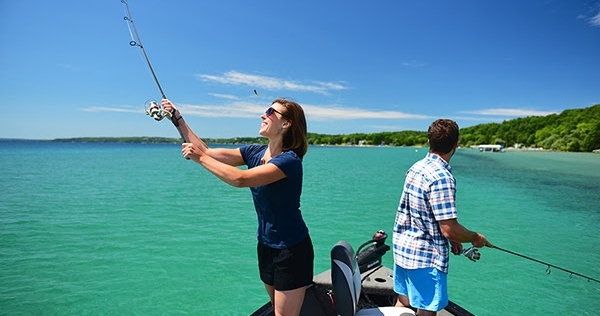 “It’s exciting to have the opportunity to fish with Kevin in Northern Michigan,” Snyder said. “He’s a great ambassador for our state as he shows off his angling skills all over the world, and I’m hopeful I can get some tips from him as we spend the day in beautiful Traverse City.”

The expedition is being filmed for iFishigan, a program airing on the World Fishing Network that highlights the excellent fishing opportunities in Michigan – and especially in the Traverse City area, regarded as the “Holy Grail” of freshwater sport fishing. iFishigan host Danny Leonard, a former fishing guide and National Bass Tournament professional, said Snyder is eager to be on the show.

“The governor is a lifelong Michigan fisherman and really wants to do more to promote this state’s world-class fishery,” he said. “That’s why he was glad to get together with Kevin Van Dam.”

VanDam, often called simply “KVD,” is regarded by many professional anglers as the best competitive fisherman on the planet. A Kalamazoo native, he has earned more than $6 million in prize money and captured dozens of tournament wins – and his favorite smallmouth grounds are Grand Traverse Bay and the inland lakes near Traverse City. He and Snyder will be fishing Friday, October 23 at a still-undisclosed location in the area.

iFishigan airs to over 50 million households in the U.S., Canada and the Caribbean, and will begin its second season in January. Underwritten by Traverse City Tourism, the region’s official destination marketing organization, the program is focused on “big fish action” interspersed with short segments that highlight the area’s natural beauty, lively culinary scene and plentiful recreational opportunities.

With the clear, blue waters of Lake Michigan and scores of crystalline inland lakes just a short cast from its quaint shops, gourmet restaurants and sugar sand beaches, Traverse City has been quietly gaining fame among serious anglers and their families as the ideal venue for a fishing vacation.