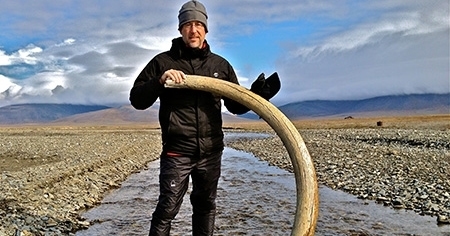 TRAVERSE CITY: Bestselling author Hampton Sides will make a National Writers Series appearance on Thursday, September 17, at 7 pm, at the City Opera House in downtown Traverse City. He will discuss his newest book, In the Kingdom of Ice: The Grand and Terrible Voyage of the USS Jeannette—a white-knuckle tale of polar exploration and survival in the most unforgiving territory on Earth.

Hampton Sides is best known for Ghost Soldiers, which sold more than one million copies and was translated into a dozen foreign languages. His epic story of Kit Carson, Blood and Thunder, was named one of the 10 Best Books of 2006 by Time magazine and is under development for the screen. A Yale graduate, he is partner of Atalaya Productions, an independent film company. NYT bestselling author and NWS co-founder Doug Stanton is guest host. For more information or to purchase tickets to the September 17 event, please go to www.nationalwritersseries.com.

Anne Stanton, Executive Director, caught up with Hampton earlier this week for a pre-event chat.

Q:  What did you find most fascinating about the story of the USS Jeannette? How did you even come across it?

I first came across it in Oslo, while I was on an assignment for National Geographic about the Norwegian explorer Fridtjof Nansen, who in the 1890s had become engrossed by an earlier U.S. polar expedition—the 1879 Arctic voyage of the USS Jeannette. Even though the Jeannette was a thoroughly American saga, I had never heard of it before. When I dug into the primary literature, I found it to be one of the grittiest, most harrowing stories of adventure and discovery that I’d ever encountered, chock-full of amazing characters. The Jeannette expedition was extremely important and universally well known in its day, an American Shackleton story 35 years before the Endurance. But no one I knew had ever heard of it. That’s when I knew there was a book here.

Q: Tell us about your own journey to the Arctic and how it helped in investigating the story.

I spent three years on this story. For me, the biggest and most rewarding challenge was physically retracing parts of the voyage. I wanted to follow in the path of the Jeannette—to experience something of what that epic journey was like—so I went to the Russian High Arctic and the central coast of Siberia where the men of the Jeannette made landfall. This is some of the most severe and inaccessible terrain on earth, but also hauntingly beautiful. The end of the Cold War and the thinning of the ice brought about by climate change had made it possible to reach many of the places the Jeannette had voyaged, places that had effectively been off-limits for more than a century. The icebreaker I took up to Wrangel Island in the High Arctic smashed through many miles of ice floes, but several times was brought to a complete standstill. Looking out over the seemingly endless fields of sludge and rubble, I got some sense of the despair De Long must have felt during his two-year imprisonment in the ice. My real goal was to find the mountain deep in Siberia’s Lena Delta where the Jeannette survivors buried their comrades. It took me forever, but I finally found the site: Even to this day, it’s called American Mountain.

Q: Describe for us the theory of the Arctic seas and why so many “experts” held so stubbornly to them.

It’s hard for us to understand how intensely curious people were in the 19th century to learn what was Up There. The polar problem loomed as a public fixation and a planetary enigma. Was it ice, water, or land? Were there lost civilizations? Undescribed species? Whirlpools? Enormous heat vents that led into the earth? No one knew, and that drove people crazy. George De Long, captain of the Jeannette, actually hoped to sail to the pole. His expedition was predicated on a theory, popular at the time, that the Kuro Siwo, a tropical current in the Pacific, swept through the Bering Strait and then softened up the ice, creating a “gateway” to a basin full of warm water—the Open Polar Sea, it was called—that many leading thinkers believed covered the earth’s dome. This was an ancient idea that went back to the Greek and Vikings and became enshrined in a beautiful and influential Mercator map in the 1590s.

In the mid 1800s, the leading proponent of the Open Polar Sea theory was Dr. August Petermann, a German who was the world’s preeminent cartographer at the time of the Jeannette voyage. Petermann said that all the Jeannette had to do was bust through the ring of Arctic ice and enjoy smooth sailing to the North Pole. There wasn’t a shred of evidence for his theory, but no matter: Petermann was eloquent and forceful, and his beautiful maps showed an “Open Polar Sea” that was impossible to dislodge from the public imagination. I went to Petermann’s hometown of Gotha, Germany, and found him to be a fascinatingly gothic character—romantic, eccentric, grandiose, deeply flawed, and ultimately tragic. It all seems so absurd and fantastical now, but I had to constantly remind myself how little people really knew and thus how energetically certain theorists exerted their imaginations in order to fill in this gap of human knowledge.

Q: It’s interesting how the publisher of the New York Herald went to such extremes for a story. How do you think journalism has changed since then?

Although it was an official US Navy undertaking, the Jeannette voyage was underwritten by James Gordon Bennett, Jr., the half-mad millionaire playboy publisher of the New York Herald. Bennett, who had sent Stanley to find Livingstone in Africa, was looking for another sensational story for his newspaper, so he bankrolled this expedition to reach the North Pole. Bennett’s whole approach to journalism says much about the Gilded Age—about the power of the press in that era, and the stupendous amount of money and influence that a single man could wield. Bennett—a duelist, a sports enthusiast, a womanizer and a famously reckless yachtsman—was an outlandish human being with an iron will, and he had a wallet fat enough to make this all happen.

Q: Are there any other media moguls today who could compare?

Rupert Murdoch, Ted Turner, Amazon’s Bezos, maybe Hefner in Playboy‘s prime—these guys all have certain similarities with Bennett, but they just can’t compare in terms of sheer mercurial behavior and titanic ego. Bennett was the product and in some ways the apotheosis of the Gilded Age, when excess and outlandish behavior ruled the day. He was a perfect creature of his times. He believed newspapers should not just report stories, but create them—that is, engineer grand spectacles (in the name of science, or sport, or national ambition) that were virtually guaranteed to produce lots of good drama. I’m not sure that kind of thinking exists in journalism today—unless you count cheesy reality TV shows as journalism!

Q: Of all your books, which was your most favorite to write?

C’mon, you know that’s like a parent having to pick a favorite child. Each book is different, and each one, in its own way, is special. Ghost Soldiers was my most successful book. Blood and Thunder, my biggest and most ambitious. Hellhound On My Trail was my most technically demanding. In the Kingdom of Ice, I would say, is my most mature, most fully realized book. I think (I hope!) I’m getting a little better at this with each book, a little more proficient in the craft. But if I had to pick a favorite, I’d actually say it was Americana, which is an anthology of my magazine journalism. It’s like a road map of my early career and brings smiles on my face when I think of all the strange journeys and spirited goose chases I went on in more youthful days.

Q:  What are you working on now?

I’m writing about a storied battle in the Korean War, the battle of Chosin Reservoir. It’s a survival story, really, about how a small force of US Marines, British Royal Marines, and US Army soldiers had to fight their way out of a trap when 120,000 Chinese soldiers surrounded them in a narrow pass high in the mountains during a horrible winter storm. I guess you could say the themes in this story dovetail with those found in many of my earlier books. I’m fascinated by how people survive extreme situations, the combination of strengths they’re able to summon. Sometimes it’s physical strength, other times it’s more spiritual, a certain grace under pressure. These ordeals, I think, have a nearly universal appeal because they’re a kind of metaphor for any challenge that life may throw our way. The Chosin battle is a story not about a victory, but about a retreat. I find that I’m often drawn to noble failures of history, to stories about honorable withdrawals and lost causes, mad missions and quixotic quests. They’re often more interesting than stories about pure success. They usually reveal more about character, and somehow they’re easier for me to relate to. I’m interested in seeing how tenacity and grit rise out of disappointment and despair. How someone fails says a lot more about his character than how he succeeds.