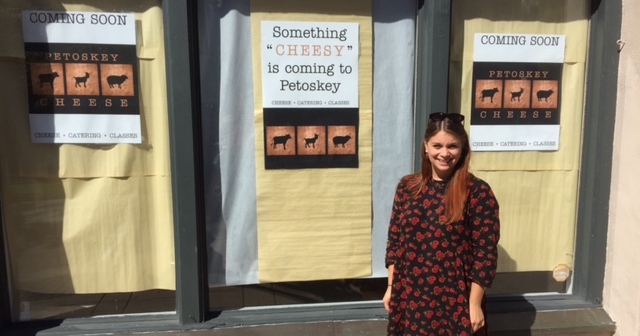 She loves it so much that she is bringing her passion home to Petoskey in the form of her own shop, Petoskey Cheese, slated to open in October at 437 East Mitchell Street. “My favorite thing about it is that you can eat it for every meal or use it to just jazz up a meal,” she says.

Depending on the season, Petoskey Cheese will offer somewhere between 50-100 different types of imported and domestic cheeses in a range of milk types, cut to order. The domestic cheese will have “a big play on the Midwest and Michigan products,” she says.

For those that aren’t big cheese lovers, Katie will also sell charcuterie like salami, prosciutto and other pork products, as well as accoutrements (think crackers, jams, honeys, mustards, salsas). She promises some interesting things that you wouldn’t think to pair with cheese.

Once Katie opens her doors, she will be working with local businesses around the Petoskey area to host cheese pairing events. She plans on emphasizing her slogan, “cheese.catering.classes” by making her cheese approachable with informal classes or local pairing events, where attendees will get an education in all things cheese. She says she has already been working with Beards Brewery to set up a monthly event. Petoskey Cheese will also have catering trays, picnic baskets and other catering options available.

Katie discovered her love for cheese during college while working at Pastoral, an artisan cheese shop in Chicago. Not only did the 22-year-old cheesemonger discover that ”cheese is cool” during her time there, she also learned about cheese care, farming and milk types. “I learned way more than just ‘oh this is sharp or this is nutty,’” she says.

When she came home to Petoskey for a visit, her parents asked her the same questions.

“And I was like I have no idea but I know that when I retire I want to open up a cheese shop,” she says. She told her parents it was something she thought about doing “when I’m old and after I’ve lived my life” but they asked her, why not do it now?

But despite her initial hesitations, a plan began to fall into place. The location she picked out in Petoskey had a for lease sign in it. She already had the business plan completed. The signs were everywhere, she recalls.

What finally cinched it for her was when she was on a bus while back in Chicago. “I looked over and there’s a sign on the bus next to me and it says ‘Wake up to this, petoskeyarea.com’ and I was like, that’s my sign,” she says.

She called her mom and told her that she was officially moving back home to open the shop.

As she gets closer to opening day, Katie can’t stress enough that Petoskey Cheese be a place that is accessible to everyone. “I want to make it an approachable and educational experience,” she says. “Because obviously food is fun, food is love to me. I want to put a piece of cheese in my mouth and pick out every single flavor and I want to help other people do that too.”

Whether you love gouda or goat cheese, Katie encourages you to stop in for a sample or slice.

“No matter where you are in artisan food I want to make it an enjoyable experience, because that’s what is going to want to make you come back.”