No Sharks in the Great Lakes 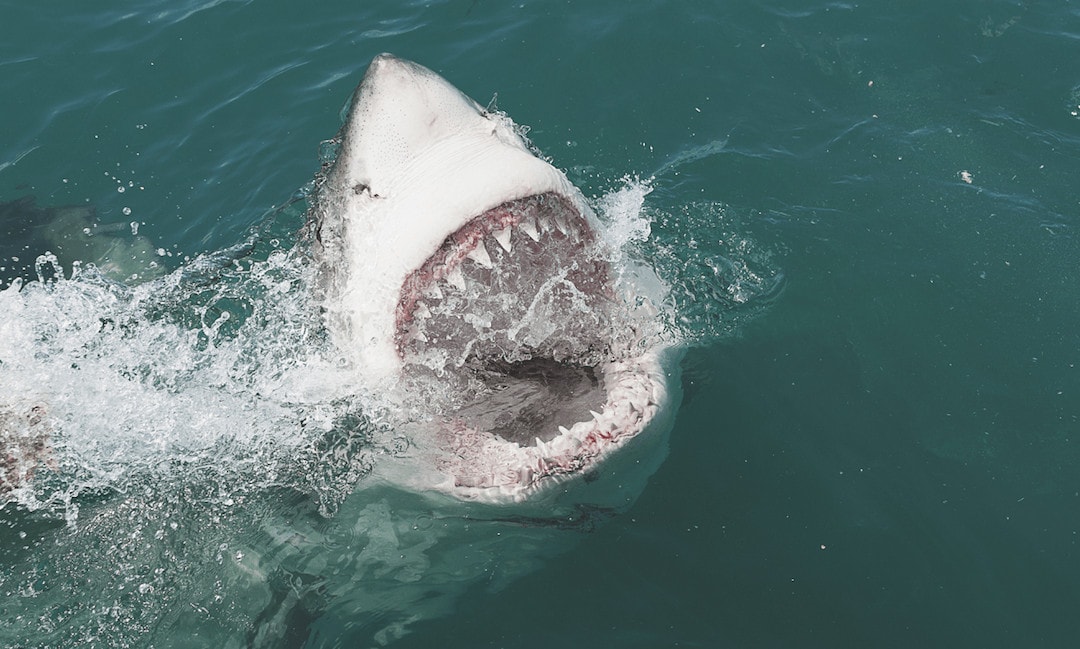 Ken Marten enjoyed his time swimming at Northern Michigan beaches until he saw the movie Jaws and then everything changed… As he says in his essay, “so I stood on the beach throughout my summer vacation, watching others splash, swim and frolic … all the while scanning for sharks.” His essay was originally published in the September 2015 issue of Traverse, Northern Michigan’s Magazine.

I spent the summer of 1975 at the beach. Or rather on the beach, planted firmly in dry sand, scouring Lake Huron like an air traffic controller minding the radar. Every ripple, wave and whitecap. Every chunk of limestone and waterlogged driftwood lurking beneath the surface. Seagulls, floating trash, pleasure craft and far-off freighters, nothing escaped my eagle eye as I scanned the water for shark fins.

Yes, shark fins. I expected triangles of death to emerge at any moment off the beach of Roger’s City’s quaint Lakeside Park and devour dozens of birch-bark-pale Northern Michigan bathers.

I know it sounds foolish. But I was a mere 8-year-old boy in summer ’75, with a pliant and creative mind that was easily led astray into myth and fantasy by anyone able to spin an engaging yarn. Thanks to Robert Louis Stevenson and Walt Disney, I dug for pirate treasure behind the garage. Thanks to folklore and pseudo-science, I searched for Bigfoot tracks at Hoeft State Park. And thanks to Steven Spielberg and writer Peter Benchley, I feared great whites in the Great Lakes.

Jaws chewed its way through movie screens across the country that summer and henceforth redefined the term “blockbuster,” becoming the highest-grossing film ever until the launch of Star Wars a few years later. My parents didn’t let me see Jaws (I didn’t actually watch it until I was well into college). But no matter. The movie poster and TV commercials included more than enough imagery to keep me dry that summer. That doomed naked chick’s head bobbing uncontrollably at the water’s surface, the bom-bom bom-bom soundtrack that implied death in moments, and the shark’s toothy jagged frown. There was no escape.

This was a real problem for a lad living in a lakeshore community whose inhabitants praised the water at every opportunity. As soon as the weather warmed, parents emerged from hibernation, peeled the children from their snowmobile suits and headed toward the big lake—the focus of all family-oriented activity. The playground and pavilion were at the shore. The band shell was next to the marina. The outfield fences at the little league diamonds were steps from the beach. There was no escape from that, either.

So I stood on the beach throughout my summer vacation, watching others splash, swim and frolic, all but certain that fins, flailing limbs and bloody mayhem would supplant summer fun at any moment. I’d sometimes venture in up to my knees, hiding my fear by announcing that the water was ice cold and knowing that when the feast began, I’d be the first to reach shoreline sanctuary. Twice or thrice, I went as far as chest deep, practically paralyzed, and retreated quickly to shore claiming a sudden desire to build a sandcastle.

Sadly for me, the onslaught of fright didn’t end with Jaws. Hollywood exploited death-from-beneath-the-waves in short order with the always-popular mockbuster (not forgetting the Jaws sequels). Orca (1977) demonized the killer whale and Tentacles (1977) the octopus. Piranha (1978) turned schools of bluegills into insatiable man-eaters. Made-for-TV The Bermuda Depths (1978) spawned fear with a Godzilla-sized sea turtle.

Print media also got in on the act. Magazine racks everywhere stocked glossies devoted to water-based terror. I swear on a stack of National Geographics that I read the following passage—paraphrased from memory–in one of those “true” tales of the sea that cheapo paperbacks churned out to capitalize on shock dollars: “Bull sharks have been known to swim up the St. Lawrence Seaway and cause problems in Lake Michigan.” So much for the relative safety of fresh water.

Forty years ago, I thought I stood as the lone child on the Northern Michigan beach. Today, thanks to therapy, maturity and the internet, I know I was but one among the irrational masses that included kids and grownups. Newspapers in the ’70s were awash with articles about the Jaws phenomenon being responsible for a real or imagined increase in shark sightings, as well as a decrease in beach attendance and participation in watersports everywhere.

I remember the swimmers at Lakeside Park responding to primal fear. Every once in a while in summer ’75, some smart-aleck teenager would yell “Shark!” from a far-off corner of the park. And people got out of the water. It wasn’t a shoreline stampede like in the movie, when the shark devoured the Kintner boy and his raft within sight of the bathing herd and slower folks were trampled in the surf. It wasn’t nearly as dramatic. But they casually stroked for shore or climbed onto one of the diving platforms moored in deeper water. They all knew better. But just in case there was a flicker of truth in that cheapo paperback, nobody wanted to be Lake Huron’s first shark victim.