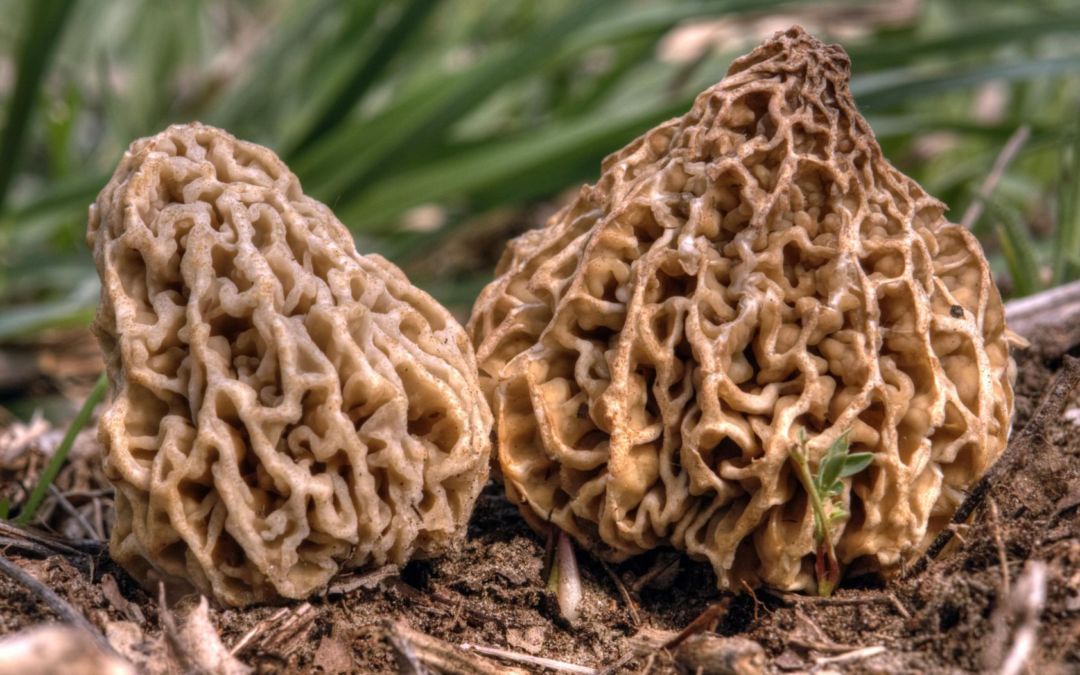 English instructor James McCullough, at North Central Michigan College, in Petoskey, asked his students to write essays about Northern Michigan life. Then he asked MyNorth to share six of the essays on the World Wide Web. We said yes. We are posting one each weekday until the set is complete. Enjoy this piece, by Andrew Benzing, about morel hunting.

Then check out these tips for finding your own morels!

The forest is cool, but I’m uncomfortably warm in my Carhartt. I toss it down and look around to note its position as it crumples stiffly at the base of the tree. My Uncle Lewis wheezes up the hill to pant next to me. He’s clothed in a fashionable sweater and unrealistic expectations. We are morel mushroom hunting in the lush springtime woods of Northern Michigan, but I’m afraid my philistine uncle doesn’t understand the mystique of the morel. He’s adopted the latest national fad of gathering natural foods; raising honey, gathering chestnuts and preserving jams are simply his sacrifice on the altar of eco-sustainability. To him, mushrooming is just an extension of this hobby.

But his life choice became my concern. I alone of my family was captured by the aura of morels. I have spent countless days walking the woods, nothing in my mind but mushrooms. Naturally, I have become good at it. I can simply look at a patch of woods and tell you if it contains morels. Thus, Uncle Lewis traveled the five hours to our house for the purpose of a guided morel hunt. He talked in the car of his hopes to “get maybe fifty pounds to preserve.” I ponder how to explain that, it just won’t happen. I should just say, “We’ll be lucky to find ten pounds worth in an afternoon.” But I can’t. First, I won’t crush a fellow morel hunter’s dream. I, too, began with dreams of filling trash bags full of morels, and it was that hope that drove me on through years of wanderings with nary a mushroom to be seen. Second, I too hold on to the hope that we will find mushrooms galore.

So maybe I should resign myself to Uncle Lewis learning the hard way. But I’ve never been responsible for an event or outdoor experience before. My father always took me and my friends fishing, and I never host the parties I go to. So my being responsible for the success of this venture, success measured at fifty pounds of morels, is new. I can’t just give up.

We stand at the top of the hill, and look down. In the next valley the forest-filtered sun glitters dimly across the rain pooled on the wide leaves of the vibrant green leeks. Up here in the sun my need for a coat is definitively absent. I recommend a course of action. “I’ll cut across and move up the other side of the valley; you check the valley floor, swing over, and meet me at the top.”

There are actually many morels in the valley (I’ve taken him to one of my best spots). I pick each one carefully, remove the dirt, and place it carefully in my paper grocery bag. I look down into the valley to see if Uncle Lewis seems disappointed. He’s actually on his hands and knees picking his way through a patch. He’s naturally adept at spotting morels, and that alleviates another of my worries. Too often, “taking someone mushrooming” becomes an exercise in them watching you pick morels. But that fear is banished as I watch him spot another morel.

We make our way up the valley, and I hope with no particular expectation that Uncle Lewis will have somehow learned the unpredictable and difficult nature of moreling. But as we crest the hill he excitedly says, “That was great! I can’t wait to find a valley that’s just full of them.” I half-heartedly suggest that we did, but he doesn’t seem to hear. I don’t see a way to slowly deflate his hopes, so I walk on.

A few hours later, we’ve picked through two more patches as good as the first. We’re walking across a wooded plateau when we reach a depression in the ground. Nestled among the leeks and roots are twelve massive black morels. But they squat there horribly, already into the middle stages of rotting. The morning rain glistens on their caps as it mingles with the black ooze lying quietly on their stems, taunting me. I kneel down with a grief-stricken air; my eyes are fixed on the putrescence that so recently was beauty. I pluck one from the leaves to look at it helplessly. I can find no reason to put it in my bag, but to simply leave it here, wasted, is intolerable. Uncle Lewis bustles up behind me and sees them. “A shame we weren’t here a few days ago,” he notes with faux-wisdom. “They would have been perfect then.” The obvious banality of that statement enrages me. I clench my teeth against the sudden flush of anger. I’m mourning the wasted passing of nature and my uncle is mildly disappointed that there aren’t twelve more mushrooms to stuff into his bag. I lash out with my thoughts. He’s only here to prove he could support his family on a primal level. He’s a regressed human, sacrificing transcendence for the satisfaction of being a successful hunter/gatherer.

I pause, a little startled at the depth of my sudden resentment. I think back to the first time I heard about morels:

“Why doesn’t someone just grow morels, if they’re so good?” I demand of Mr. Morse.

This gives me pause. The green thumb in my family renders that statement unacceptable. “If someone could, they’d be a millionaire pretty quickly,” Mr. Morse continues. Dollar signs quickly spring to life in my eyes. I already dream of the fortune-building lemonade stand, so growing mushrooms seems a ridiculously simple task.

Back in the present I blush slightly and duck my head to hide it from Uncle Lewis. Before I appreciated the aesthetic of mushroom hunting I was simply in it for the money. I suddenly feel ashamed; Uncle Lewis is legitimately trying to do something worthwhile, for a goal other than money. When I was at his level of exposure to morels my sole interest was for the cash to be made.

So maybe we all get a shot at a higher plane, even Uncle Lewis and I. My mind races. Perhaps this is Uncle Lewis’s transcendent moment. He’s choosing to enter nature to find food, rather than make the weekly trip to Wal-Mart. My heart swells with the idea. He’s enjoying this as much as I am, and I’m not being a very nice nephew and guide. I realize I can just say, “We aren’t going to find fifty pounds of morels.” It won’t be a tragedy to him. It will be a simple fact to file away while he enjoys nature. I look at him with a kindly eye as he scurries down the hill to a mushroom; then I rewrite that sentence, banishing the belittling tone. I watch as he strides down the hill to transcendence and self-actualization embodied in a small mushroom; a Colossus, an Atlas, bearing the burdens of lone humanity, standing up to face the eternal night.

Memories of a Northern Michigan Farm