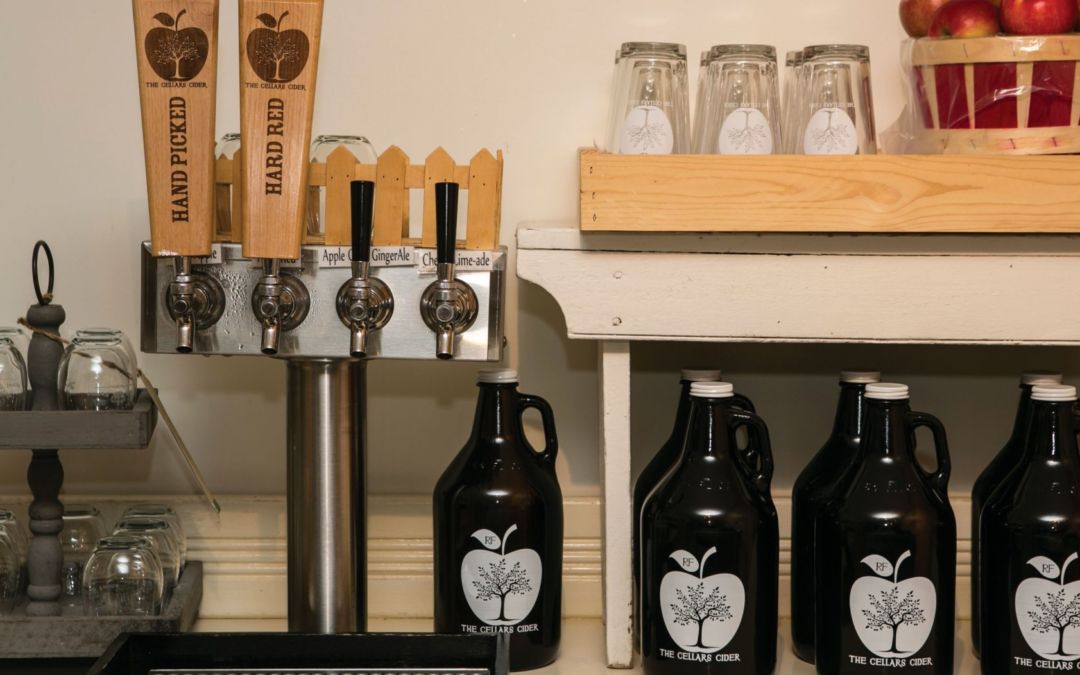 Northern Michigan cider is a growing trend throughout Northern Michigan from Traverse City to Bellaire. Cider was the beverage of choice for pioneer America, but it faded from the scene as the 20th century evolved. Now cider is regaining its rightful place in the glass, and Northern Michigan has the apples and the knowhow to be a national leader. Find the original layout in the September 2015 issue of Traverse, Northern Michigan’s Magazine.

Stop by Dennis Mackey’s tractor dealership turned cider production facility near the Manistee County village of Kaleva, and you’ll notice a six-pack of Angry Orchard cider—a major national brand—on the shelf. But make no mistake. Dennis doesn’t drink it, nor is he trying to emulate the cider’s mass-market model. He uses it for product packaging inspiration, which came in handy when his company, Northern Natural Organics, started bottling and selling its hard cider locally in May.

“I don’t want to be an Angry Orchard—I want to be a regional cider company that puts out the best possible product,” Dennis says. In his mind, the best ciders start with a clean apple. And by clean, he means certified organic.

He sees the growth trends in both hard cider and organic foods as closely intertwined.

Dennis grew up on a fruit farm one mile from what’s now the Northern Naturals plant working odd jobs for his parents. At Western Michigan University, Dennis studied teaching to escape farm life and experience a summer off. Substitute teaching cured him of that career. “I discovered that light-to-dark working on a farm wasn’t that bad,” recalls Dennis. He landed his first post-college job at an apple-packing plant at Lakeview Orchards (now Douglas Valley in Manistee), eventually running it.

In 1990, he took a job with a Milwaukee-based heart surgeon named Dudley Johnson. A farm kid himself, Dr. Johnson hired Dennis to run two commercial orchards and two farm markets that he owned as a hobby. For Johnson, it wasn’t enough to grow apples in the traditional way; he wanted organic apples for their health benefits and asked if Dennis could grow them. “I said nobody can, but I could get close,” Dennis reminisces. He knew he could use organic sprays to combat fungal infestations, but fighting insects was another matter. “Forty-three bugs eat apples. It wasn’t easy to grow clean apples,” he says. 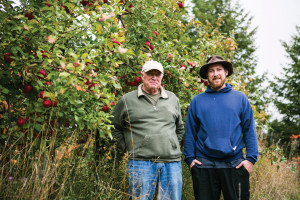 After much tweaking and experimenting, Dennis started growing certified organic apples for Johnson in 1993—a task that would set the course for Dennis’s future. He ran Johnson’s orchards until 2000 when the doctor decided to get out of farming. The owner of Eden Foods, based in Clinton, Michigan, offered him a job in purchasing, where his agriculture upbringing was a perfect match for visiting farm customers. But the constant travel to food shows across the country wore on him, and farming life drew him back.

In 2002, Dennis called upon his organic orchard experience from Wisconsin and, with five other farmers, started Northern Organics Juice Company. It struggled in the early years, with partners coming and going. Wholesalers badgered him constantly to reduce his prices, even though all his juice products were certified organic—a detail Dennis firmly believed in.

In 2007, he had an epiphany. He secured a winery license and started making hard cider and fruit wine from organic strawberries, cherries and peaches. And he struck gold. “The fact is, juice is juice. But if I ferment that same half-gallon of cider, it’s worth twice as much—and it’s a lot easier to sell. People aren’t asking me to reduce my price. With hard cider, you set the price.”

But his hard cider made from certified organic apples is the more coveted beverage, appearing on taps at Poppycock’s, Georgina’s and Pangea’s Pizza Pub in downtown Traverse City, with more outlets on the way. That doesn’t include the 12 revolving taps at Northern Natural Cider House, a tasting room on Traverse City’s Front Street that opened in 2013.
Dennis’s latest business venture is selling 12-ounce bottles of organic Northern Natural hard cider at his Kaleva and Traverse City locations, with flavors including traditional, cherry, blueberry and a limited edition made with ale yeast. Lavender and elderberry aren’t far behind. He hopes to line up a wholesaler soon to sell to even more tap venues.

When asked about the recent hard cider phenomenon sweeping Michigan and the nation, Dennis is quick to point out that hard cider is one of our country’s oldest alcoholic beverages. Had it not been for Prohibition, the category might be pulling in more than the 1 percent of the beer market it is does now. “Hard cider is not a fad. It once was the drink of this country,” he says. “When Johnny Appleseed planted trees in the Ohio Valley, he wasn’t planting for fresh fruit—it was for hard cider. That’s what everyone drank then, because they didn’t trust the water.”

Dennis theorizes that beer took over as the alcohol of choice following Prohibition when German immigrants came to America with their beer recipes. And while hard cider has taken off again, he thinks it has a long way to go in penetrating the alcohol market.

You wouldn’t know that in Northern Michigan though, where hard ciders are showing up in more tasting rooms every season. Wineries like Blackstar Farms, Bowers Harbor Vineyards and Left Foot Charley all have hard cider offerings. At Good Neighbor Organic Vineyard and Winery in Northport, 50 percent of its tasting room offerings are hard ciders. Tandem Ciders near Suttons Bay serves exclusively hard cider. And in the last year, Bellaire’s Short’s Brewing Co. debuted Starcut Ciders, a division that produces and distributes bottled and draft craft ciders throughout Michigan. There is even a Michigan Cider Association that formed this year in response to the cider phenomenon.

But for every tasting room adding a hard cider, there are as many philosophies about what makes the perfect glass. Some treat hard ciders as a close cousin to a wine, processing cider from one apple variety like a wine featuring one grape varietal. “Michigan lends itself well to this because we have so many excellent heirloom apples like Northern Spy, Jonathan and Ida Red,” Dennis says.

Others see hard cider as an opportunity to celebrate the spectrum of Michigan’s fruit bounty, pressing blueberries, cherries, peaches, raspberries and more—using fruit juices to flavor the apple cider base. Bowers Harbor Vineyards added hard cider to its lineup in 2009, and it is now one of the winery’s top-selling products. The Bowers ciders are marketed under the Spirit Cider line, with four flavors on tap. Apple, peach and cherry are the mainstays, and the fourth tap rotates with flavors like strawberry, blueberry, raspberry and cranberry.

And there are cider makers, like those at Northern Natural, who look at hard cider as a culinary adventure where apples can be infused with any number of flavors. Kyle, Dennis’s son and chief of cider operations, brings his culinary chops from the Great Lakes Culinary Institute to each cider recipe he creates, testing customer reactions at the tasting room. “I get invaluable feedback. We always have a couple of rotating taps where I can test a new flavor that I just dreamed up to see if it’s a hit. If we get complaints, I’ll drop it.”

Like an alchemist, Kyle is always experimenting with combinations. “We put cranberry ginger on tap for a one-week trial during Thanksgiving, and at end of the week, our customers demanded we keep it. Another taproom favorite was lemongrass cider. This year, we’ll feature pumpkin pie cider made with organic pumpkin pie puree.” He also creates themed hard ciders for special occasions. During the National Cherry Festival, Northern Natural offered six hard cherry ciders. Kyle also made a cider with cilantro and lemon lime for a Mexican festival.

For Dennis, making organic hard cider isn’t just about turning a profit or creating a new flavor. It’s about clean eating (and drinking)—a philosophy so synonymous with Northern Natural’s products that the company uses “clean-clear-crisp” in its marketing. “If you look in my fridge, I have organic eggs and organic milk, plus vegetables I grow organically in my garden. I’ve always served my family organic food, even when my kids were little.” He also points out that cider is gluten-free, an important health draw for those wanting to reduce or eliminate gluten from their diets.

While you’re out this month soaking up the last of summer or catching a first glimpse of autumn colors, factor in a few hard cider stops along the route. It’s like autumn in a glass.

37th Annual Apple Fest, October 9–11, East Park, Charlevoix:
This three-day event is an annual homage to the apple and Michigan’s local apple orchards and growers. More than 30 types of apples will be on hand as well as other fall harvest items such as pumpkins, squash, jam, honey, maple syrup, pies, caramel apples, cider and more. Afterward, mosey over to Bridge Street Taproom with its 32 rotating taps, one of which includes Northern Natural hard cider.

Hard ciders are showing up all over the North—in wine tasting rooms, in breweries and, of course, in pure-play cider houses, like Northern Natural’s in downtown Traverse City. These five can help get you started.

Traverse City (Grand Traverse Commons), 231.995.0500
Billed as the only urban winery in the region and located in the handsomely re-purposed laundry building of the former state hospital (wonderful patio), Left Foot Charley offers two hard ciders on draft at a time (and the ever-popular Cinnamon Girl is almost always on tap). Ciders are available for purchase by the taste, glass or growler, and Cinnamon Girl is available in 500ml bottles.

Ellsworth, 231.599.3222
This boutique-like farm market features a new wine and hard cider tasting room, in addition to its usual offering of seasonal fruits and vegetables plus an in-house bakery, ice cream house, green house and gift shop. Products include McGoo’s Hard Apple Cider sold in bottles; and Hand-Picked (apple), Hard-Red (cherry-apple), Green Apple and Pink Bikini (limited-supply summer cider) on draft and made from a variety of antique and rare apples.

Suttons Bay, 231.271.0050
This cozy barn turned cidery resembles one of the many British pubs the husband-and-wife owners frequented on a cycling tour through England—thus the name. Four ciders rotate on tap (including Crabster, Green Man, Fat Chaps and Scrumpy Little Wood), and they also sell 750 ml bottles of Cherry OH, Pretty Penny, Smackintosh and Pomona (apple brandy and sweet cider aged in oak barrels). Watch for single-serving cans in stores.

Petoskey, 231.753.2057
In a fitting location, Petoskey Brewing is in the “Old Brewery” building completed in 1898 that was used to brew Petoskey Sparkle beer until 1915. Reopening with the original namesake in 2012, the brewery features approximately 12 rotating taps, including Red Brick Hard Cider—a semi-sweet hard cider made with a blend of Michigan apples.

How to Store Apples