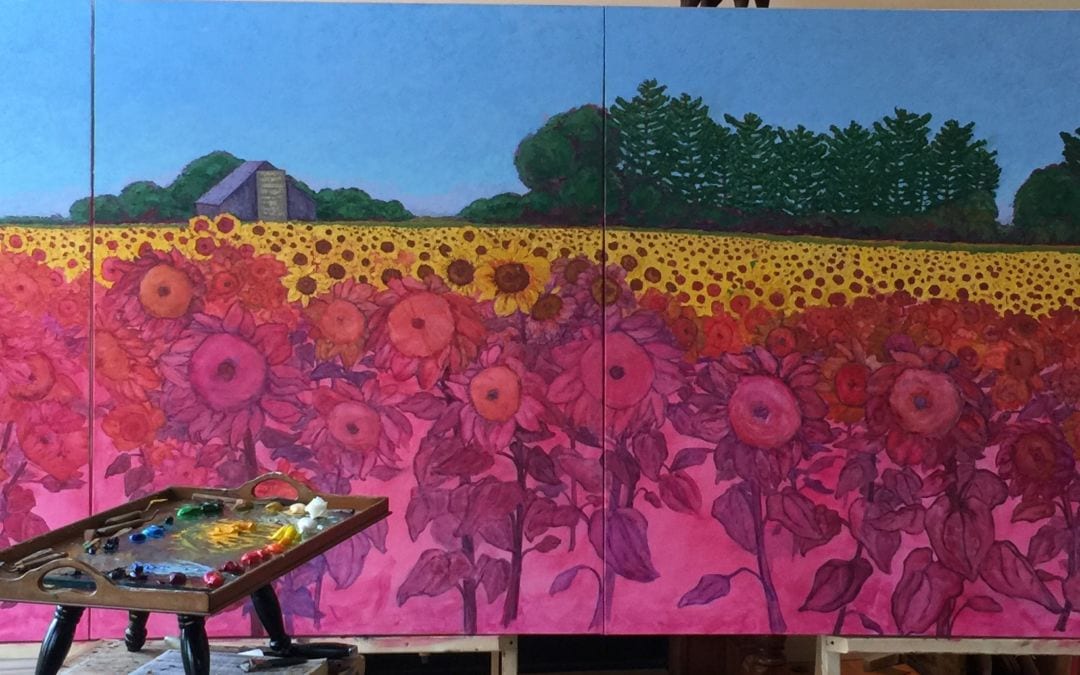 MILAN, MICHIGAN: Artist Kim Rhoney has attended ArtPrize for the last three years as a spectator, but she knew from her very first visit that she wanted to participate as an artist. The Michigan artist called Traverse City her home for several years but now lives in Milan, close to Ann Arbor.

“The fact that ArtPrize is open to artists of all types and that it is juried by more than one group was appealing,” said Kim of her desire to enter the competition. “I knew from the very first year I attended that I was going to do it.”

That was 2012. Kim was patient and thoughtful about when she would enter. As a full-time artist, taking time out of her regular work schedule to focus on a piece for ArtPrize was something she needed to work out in her budget, with regard to both finance and time.

“I knew I would only do this when I had the time and a concept for the work that would be strong on content and execution—something that could win and bring attention to my art.”

From the very beginning, Kim knew the subject matter would be one of her sunflower fields.

Kim began her art career working on figures, but that changed when she took up residence on a farm. On her farm, flowers and a rural landscape surround her, and the only human models (her kids) wouldn’t sit still. Painting her surroundings helped Kim find her voice and ultimately fueled a series of work that was more marketable.

“People like sunflowers because they have a sublime and human quality,” says Kim. “They move—they are gestural. Sunflowers make people happy.”

Kim understood that, like an actual sunflower field, a painting of sunflowers would require a big space with natural light. Her 2015 ArtPrize entry “Field of Joy,” will be on display at DeVos Place, a venue that Kim says provides both the space and natural light.

Earlier in her career, Kim lived and worked in Traverse City. When she returned to southeast Michigan for a job in Ann Arbor, she decided to make her home in Milan, the rural community in which she was raised. Milan offered the expanse of nature to which she had grown accustomed in Traverse City.

She built a farmhouse on 11 acres of farmland that her parents gifted to her and made a home with her husband Rich and two daughters, Jillian (12) and Phoebe (10).

Kim’s backyard has a colorful array of flora and fauna, chickens, a fully-stocked pond, a small fruit orchard, a kitchen garden, and sunflowers that stretch from the outer regions of her yard up to her back door.

“Field of Joy,” her ArtPrize entry, is no small undertaking. The piece is on four canvases that, in total, measure five feet tall by 16 feet wide. At 80 square feet, it is by far the largest piece she has created—by more than twice the size.

Kim’s original plan was to paint “Field of Joy” in the garage. She would face the piece toward the door, allowing her to capture the best light. Her father constructed moveable easels to hold the canvases. But her family, knowing that she would be spending a great deal of time at work on the piece, asked her to bring it inside. Her in-home studio is a well-lit room that is surrounded by the family room and kitchen.

There was one problem, however. The piece didn’t quite fit into her studio. It protrudes into the family room. Her family doesn’t mind the intrusion into their living space. Her 10-year-old daughter Phoebe shared, “I think it is very beautiful and I hope she wins.”

Rhoney’s older daughter, Jillian is also supportive. Rhoney wanted to document her progress with a series of photos, but Jillian had a better idea. She told her mom to use their iPad to take a time-lapse video and took charge of making that happen.

Rhoney’s husband Rich is editing the video and adding a soundtrack using the family Mac.

Both of Rhoney’s daughters draw and paint, but Jillian is already a working artist, selling 3D characters made of FIMO clay that she calls “Fairy Friends.” The figurines sell for $2 each. Jillian sold her Fairy Friends at two recent art fairs alongside her mother’s work, earning more than $50 at each show.

Fairy Friends are her second product line. “HOOTS by Jillian,” a greeting card line featuring owls, was her first endeavor.

Rhoney explained that Jillian got bored with HOOTS and started making figurines for their fairy gardens. The reception she received from friends and family prompted Jillian to put them on the marketplace.

Rhoney loves that Jillian is learning about being an entrepreneur in the art field at such a young age.

“She has expressed that art is the career path she wants to pursue. It is not an easy field. I am glad she is gaining experience now.”

Phoebe wants to be an engineer.

Rhoney first began to paint with a knife when she was pregnant with Jillian. At the age of 39, although healthy, her pregnancy was considered high risk. When her doctor found out she was an artist there was an expressed concern about her exposure to toxins. Rhoney consulted with a friend who was a polymer chemist. He told her, “No whites with lead, only use titanium, don’t eat your paint, keep your hands clean, and get rid of the turpentine and the Liquin.”

Rhoney had to figure out how to paint with such resrictions. While struggling to paint with a new set of rules, it was during a fit of frustration that she made a discovery. She grabbed a pallet knife to scrape something off the painting that she didn’t like.

“In doing so, I created a beautiful variegated segment of color,” Rhoney explained.

From that moment, she began to primarily use a knife.

Her process is interesting to watch unfold. It begins as a sketch on canvas, followed by underpainting of the entire canvas in hues of red with a brush. Once that is complete, the knife painting and detail work begin. The time-lapse video of the process will be featured alongside her finished piece at DeVos Place throughout ArtPrize.

Rhoney takes inspiration from nature and landscape. While her ArtPrize piece features sunflowers, she is known for painting birds’ nests, apple orchards, and poppies. An organic apple cider company in England used one of her apple orchard paintings on their label.

It was on a drive between Traverse City and Empire, Michigan, two years ago, that she and her husband Rich spotted a field of sunflowers on M-72 that would become the inspiration for “Field of Joy.” Rhoney has visited sunflower fields across the United States and in Italy, but this particular field had white pines and a barn. It was uniquely Michigan. They took a picture.

“Field of Joy” has two purposes according to Rhoney’s artist statement. 1. To spread joy—to make people smile. 2. To highlight how dependent and interconnected we are with all of earth’s inhabitants; specifically the bees.

She chose a sunflower field because, along with her husband, she grows a variety of sunflowers in her vegetable and perennial gardens.

“They are amazing hosts for bees to feed and I see a wide variety of bees gathering pollen over a good long stretch of summer and into fall.”

Rhoney is concerned about the dwindling bee population, as one in every three bites of food we eat is dependent upon bees. Her brother-in-law, a beekeeper, brought hives to her property that failed. This is something that is happening nationwide. Many sources cite the increased use of chemicals used in farming and on residential landscapes as the culprit.

“There are many theories,” Rhoney emphasizes. “I don’t know the answers but I do believe that providing a habitat for bees and clean chemical-free food is important. Individuals can make a difference by being thoughtful about what they do in their own yards.”

According to the Great Sunflower Project (www.greatsunflower.org), in Michigan, three bees visit every sunflower every hour to pollinate.

For that reason, you will discover numerous bees, including bumblebees and honeybees, in “Field of Joy.” Rhoney hopes that spectators viewing “Field of Joy” during ArtPrize will have fun finding the bees amidst the field of flowers.

It is worth noting, the wax Rhoney mixes into her oil paints is bee’s wax.