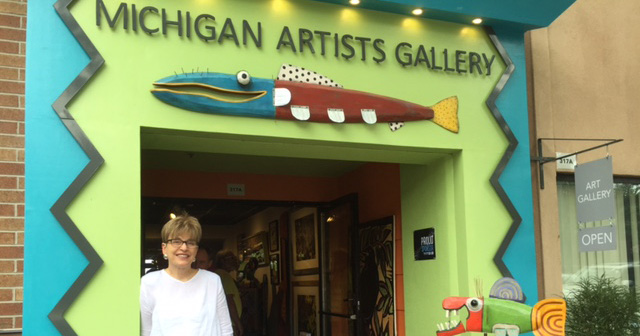 July brought an artistic addition to Front Street in Traverse City and the Northern Michigan art scene. Located a few doors down from Morsels, a colorful arch designed by Elizabeth Paxson frames the entryway to the newly relocated Michigan Artists Gallery.

After more than 18 years in Suttons Bay, Sue Ann wanted more exposure in a bigger downtown so she decided to move her gallery to downtown Traverse City.

Sue Ann compares the art scene in Traverse City to that of a dimmer light that has been slowly “going up and up” over the last couple of years. She says now was the perfect time to open a gallery because she thinks that Traverse City is finally ready for it.

As a Traverse City native Sue Ann says it’s “wonderful to be back in my roots.” In the first month of opening the gallery door Sue Ann received positive feedback. In addition to art on the walls, on the floor and on shelves, the space also looks out on the Boardman River and offers gallery goers an opportunity to sit on the porch and take in the view.

Larry Fox helped design the space, which had to be transformed from a government office into a fun and functional space to experience art. Sue Ann said that she actually didn’t gain any additional wall space when she moved to the new location, but doubled the floor space giving it a much more spacious feeling.

“We love art that is colorful, joyful and uplifting,” Sue Ann says. “There is a lot of humor in the pieces!”