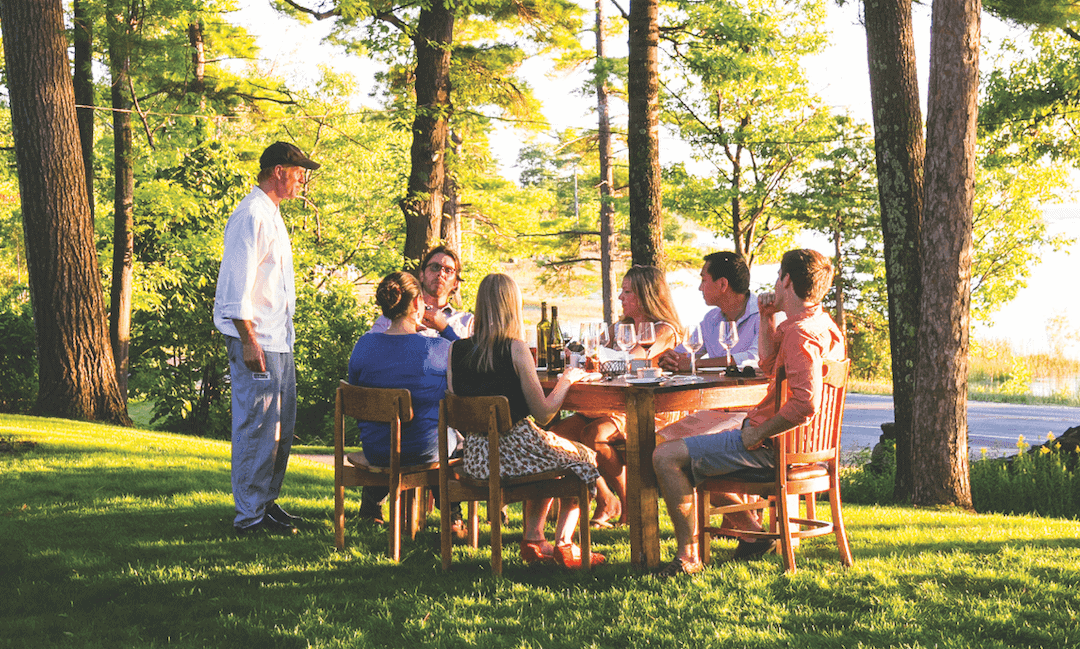 Mission Table, tucked away on Old Mission Peninsula, is led by chef Paul Olson who serves up fresh, farm-to-table fare inspired by the changing seasons.

This story is featured in the August 2015 issue of Traverse, Northern Michigan’s Magazine. Get your copy.

An intense August sun slips toward the edge of West Grand Traverse Bay, washing over vineyards, orchards and vibrant vegetable plots. The warm ochre orbs of Sun-Gold tomatoes are gathered from the vines and loaded into a pick-up beside weather-beaten bushels of sweet corn and spiraled dragon beans. The final destination of all this fresh produce is the kitchen door at Mission Table, where Chef Paul Olson and his crew labor to transform the bounty of late summer into an al fresco feast laid out on long tables overlooking the silvery ripple of Bowers Harbor.

Working quickly to capture his ingredients at the peak of freshness, Olson oversees lake trout, just netted from their deep water hideouts, deftly filleted on a butcher block. Fresh chanterelles are brushed clean and release their apricot waft into a kitchen already rich with the smell of corn stock. Fresh ribbons of fettuccine are rolled and cut, baby radishes sliced in striated disks, and sweet peaches are loaded into ramekins mounded with crumble topping. Outside on the lawn, an ice cold bottle of Bowers Harbor Vineyards’ Blanc de Noir pops its cork and glasses clink as platters of smoked rabbit and Werp Farms arugula salad land on the table. 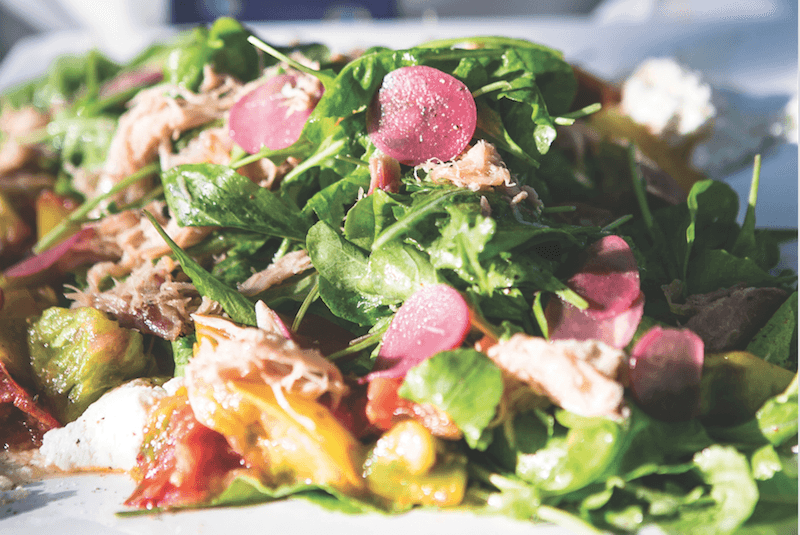 Executing a vision put forth by Mission Management, the company that also manages Jolly Pumpkin and North Peak Brewing, Chef Paul Olson has worked to reincarnate the historic Bowers Harbor Inn into Mission Table, a temple to seasonal cuisine and a showcase for the delicious synergy between small farmers and progressive chefs. Here at the onset of harvest season we travel into Chef Paul’s kitchen to explore his cooking, his story and his place in the artisan food movement that is drawing national eyes to Northwest Michigan.

After undergraduate studies at Michigan State and a culinary degree at The Culinary Institute of America in New York, Paul Olson honed his classic French technique in Manhattan working under Frederic Perrier, a young celebrity disciple of Georges Blanc and Paul Bocuse. After six years in the city, Olson embarked for New Milford, Connecticut, as a chef-entrepreneur. There, he and a partner launched The Cookhouse, an enduring outpost of Southern barbecue in New England and later moved to Newtown, Connecticut, where he opened the Inn at Newtown, crafting inspired New American cuisine from New England’s prolific farms and fisheries. 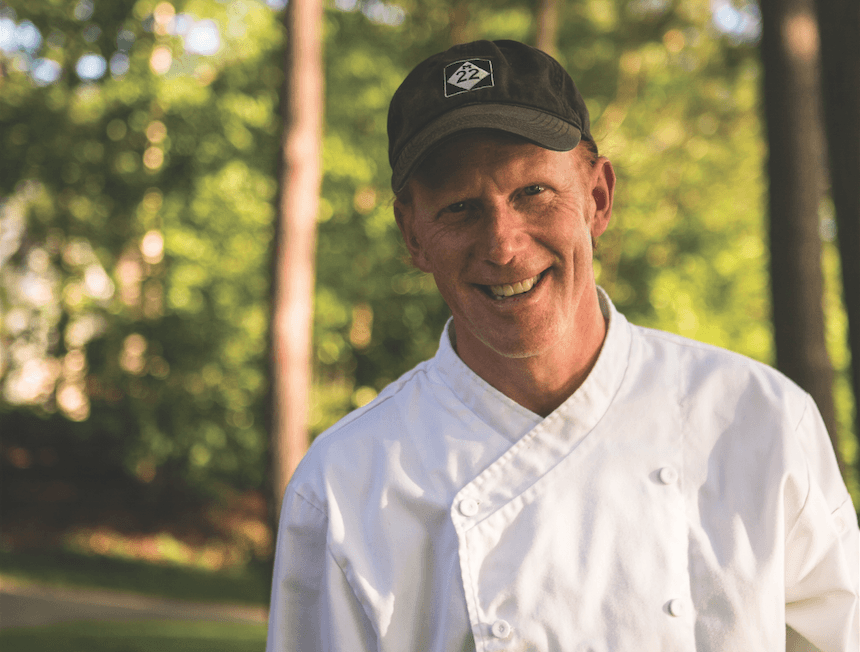 Every summer Paul and his wife, Barbara, would visit a friend on Glen Lake. “Those visits were the best week of the whole year,” Olson recalls. “I would be handed hand-drawn maps and spend afternoons picking black trumpets and lobster mushrooms in the woods.” Tired of the manic pace of his expanding network of restaurants on the East Coast, Olson discovered an opportunity with Mission Management in 2007 to launch a brewery, distillery and seasonal eatery at the iconic Bowers Harbor Inn property on the Old Mission Peninsula. “Just like the old trope, I packed up my family, took a massive pay cut and found myself with a beautiful view of the bay,” Olson laughs.

Apart from the stunning views, Olson, upon arriving in the North, discovered a vibrant and burgeoning artisan farm culture. Rich soil deposits and unique microclimates wrought by the glaciation that created East and West Grand Traverse Bays enable a local diversity of field and orchard crops unparalleled in much of the world. This brand of rich, seasonal access to product was revelatory to Olson, who immediately began networking with small local farms like Santucci, Werp and Norconk. “Out East I could buy anything at any time and didn’t have to think about seasons,” Olson reflects. “Now I live them, starting with ramps, morels and English peas in the spring, through late season squashes that come in right up until we close in the fall.” 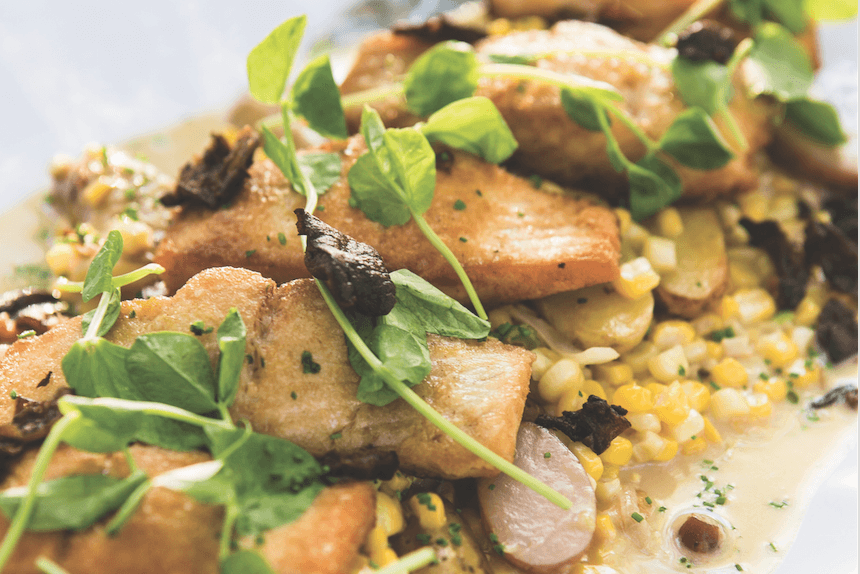 Understanding the value of local, seasonal produce and its implications for both cooking and the health of Northwest Michigan’s farm community has produced a remarkable symbiosis between area chefs like Olson and the farmers that supply them. “I have tremendous respect for our local farmers and how hard they work to make a living and grow our food, and I’m proud to say I have a personal rapport with all my vendors. It’s to the point we don’t have to seek people out anymore, farmers know that local chefs value their product and every year more of them come out of the woodwork,“ Olson says.

Olson sees that Mission Table is an active part of the organic process as the kitchen saves 100 percent of its vegetable scraps for neighboring farmers to compost into fertilizer, and spent grain from the Jolly Pumpkin brewery gets recycled as cattle feed or fertilizer for a peninsula hop farmer.

His cooking intrinsically linked to the seasonal ebb of produce, there is a kind of chef ecstasy that overcomes Olson with the arrival of August and its implications for the coming harvest. Orchards and vegetable plots are suddenly flush with a hyper-abundance of prime produce, and a queue of farmers shows up daily at his kitchen door. “It’s overwhelming sometimes,” Olson excitedly reflects. “My guys will show up with 80 pounds of Brandywine tomatoes or a hundred heads of cabbage, and we braise, pickle, ferment, make sauce, soup—anything we can to use it all.” 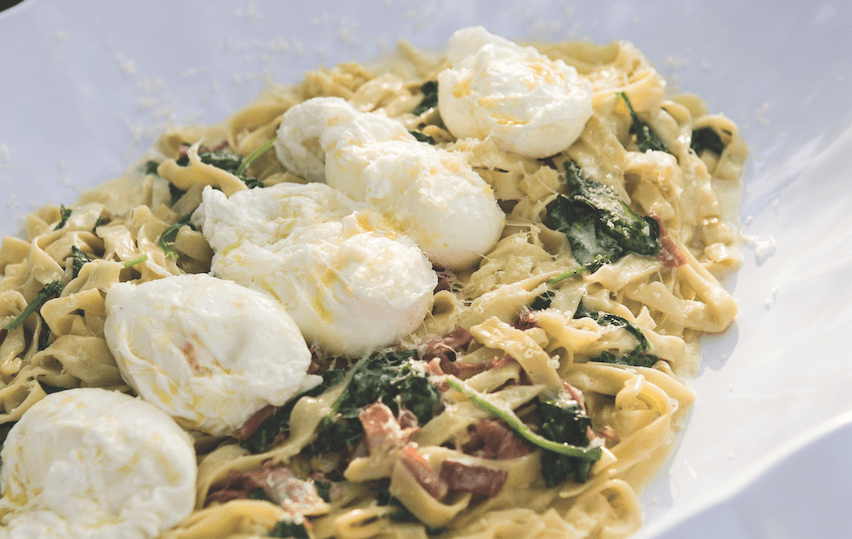 Olson considers tomatoes, beans and sweet corn the centerpieces of summer cooking and they manifest in delicious iterations all over his menu, complementing locally raised chickens, succulent smoked rabbit from Cedar’s Bunny Hop Ranch and lake trout netted daily by Peshawbestown’s Treaty Fish Company. The forests offer an undercurrent of umami in the form of fragrant chanterelle, black trumpet and porcini mushrooms.

Valuing economy and ultimate flavor extraction, Olson guides his culinary team in using shaved corn cobs to make an intensely aromatic corn stock that serves as the base for his late summer chowders and risottos. Sweet wax beans are quick-pickled or blistered in hot sauté pans, and baby heirloom tomatoes, still warm from the afternoon sun, are sliced and served with creamy burrata.

When it lands on the table, Olson’s food is deliberate and sublime with a fresh, seasonal simplicity that belies masterful technique. The sweetness of salt-roasted beets is complemented by basil and contrasted against tangy fresh goat cheese and peppery pickled radishes. A simply seared piece of über-fresh lake trout lies over an intensely rich corn and fingerling potato chowder studded with bacon and nutty wild mushrooms. Deliriously juicy local peaches are baked in a simple crisp that tastes like molten summer. 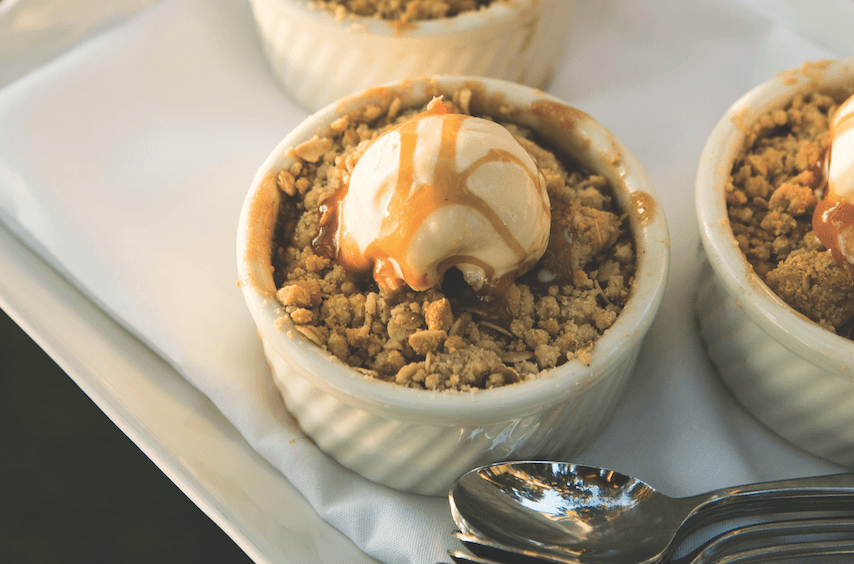 A community of conscientious chefs like Paul Olson coupled with a growing awareness of and value for fresh, seasonal food and the farmers who grow it is advancing Northwest Michigan’s local food movement from a revelation to an assumption. When our peninsular orchards yield perfect peaches, or when August brings us heirloom tomatoes, striped zucchinis and brightly veined Swiss chard, we can take pleasure in knowing that they have only to travel a very short radius to sustain and delight us in the kitchen of Mission Table.

Mission Table is located at 13512 Peninsula Drive in Traverse City.