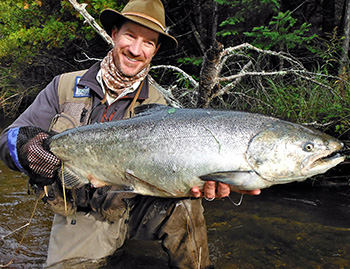 Ever since the age of nine, when his father taught him how to tie flies, Brian Kozminski has been drawn to the river. Today, he heads up True North Trout, a top notch guide service based in Boyne City, Michigan, and he’s gearing up to release his first book with Stonefly Press titled, “50 Best Places to Fly Fish the Midwest.” To tap into the wily beauty of Northern Michigan’s rivers, we caught up with the “Koz.”

Dani: Every angler has a catch that sticks. Can you tell us about one of your more brilliant catches?

 Brian: Many a late night hex hatch, deet saturated, coffee induced—browns come to mind, but I’ll never forget the day I set aside to assist Neal Godby with the DNR for a survey on a favorite nearby stream. A looming thunderstorm had cause for concern. We don’t wish to be wading with a few electrical rods in hand and towing a small barge with a generator up river while thunderclouds are overhead. We postponed. I seized the opportunity. I grabbed my raincoat, and Redington 7’6” 3-weight rod. I made for the nearest two track that led to a thin blue line. I’d frequented this stretch of skinny water before, but this morning was different. Cumulous clouds formed and hung around, a little precipitation, but not too much. I tied on a trusty Madsen’s Skunk pattern size #14 and began to work the banks and cover. With a lazy downstream cast, I flipped out a mend and the surface erupted. A short battle and a hefty 15” brook trout with thick shoulders laid in my net—a few quick pictures and some underwater footage. Then he swam back to his feeding lane. I have been back to visit, never to reacquaint with this fish. My fear is that he hangs on someone’s wall now.

Dani: What’s your favorite season for wading the river?

Brian: Fall. Sorry. Short and sweet. The true beauty of what God created emerge in spring, come into full view in summer, and seem to glow in the fading light of an autumn afternoon. The brilliance of a trout spawning colors against the soft copper and golden shades of the countryside palette are appreciated by those who seek it.

 Dani: There’s a poetry to this pastime, you know. Can you talk about your early fly trips to the Holy Waters of Grayling…what is it about fishing the Au Sable that is so celestial?

Brian: Little did I realize that my childhood trips to Grayling for family visits would have such an impact on my life and eventually meld my career with my passion. As a youngster, we fished a designated youth section of the river behind the Hospital. Way before I owned my first pair of waders, I found myself waist deep between the tag alders plying every bend and deep hole with a yellow and orange dotted Panther Martin spinner. I’d look for trout in the cold and pristine water. It was a few years later that my cousin Gary Fox showed my brother and I a few great brook trout locales where the shallow murky water exploded with plumes of mud. I was entranced. As I got deeper into the mysteries of the magical river, I was introduced to the fly rod. Dad and Grandpa both instructed me in tying and taught me the skills needed to catch the wiley trout of the north. One late September morning, the Au Sable revealed one of her secrets to me and allowed my primitive talent to catch four rainbows near the twenty inch mark with a Muddler Minnow.

Dani: You’ve been involved with Trout Unlimited, Greenfish and the International Federation of Fly Fishers. It sounds like you’re at the heart of it all! Can you talk about your experience with the northern fly fishing community? 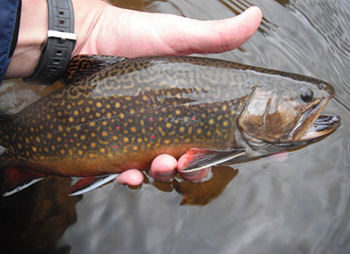 Brian: I can’t even imagine what our rivers would look like today if we didn’t have various non­profit organizations like Trout Unlimited, Angler of the Au Sable, FFF, Huron Pines, CRA, Tip of the Mitt Watershed Council and a host of others. For a number of years I was the Miller­ VanWinkle Trout Unlimited president. I learned valuable lessons about how to protect our treasured resources­. As a TU/FFF member, I protect and preserve the rivers for future generations. Additionally, I work to educate and preserve­ by educating students at Sheridan Elementary with the Salmon in Classroom Project. This MITU and DNR sponsored program brings salmon eggs to the school where the students raise the young from egg to fry to smolt. Each spring in the nearby Bear River, they’re released. When students connect to the resource, they want to be more involved— often parents do as well. River clean­ups are scheduled across northern Michigan. September 12 for the Au Sable River, August 22 for Boyne, Jordan, Maple, Bear, Sturgeon Rivers and Upper Manistee River Association later this fall. With the beautiful weather  comes many canoe and kayak recreational users. Many accidentally lose their beverages in the rivers but they need our attention to keep them pristine.

Dani: What are the greatest rivers to fly fish Up North?

Brian: Each and every river has its special time and season… ­It might be the West Branch during an epic caddis hatch as the sun sets over the horizon of tamaracks and birches while Cedar Waxwings buzz overhead like P40’s plucking bugs out of the air like enemy aircraft. You can’t make a bad cast while brook trout continually sip soft hackle off the surface as soon as your fly hits. It might be the Boyne River as you cradle a healthy silver steelhead in the water amid a dead silent river corridor on a freshly frosted Christmas Eve day ­or the upper Jordan during a fall afternoon with the trees putting on a spectacular color show for those in attendance—brook trout match the brilliance of the trees, blue haloed, orange with white tipped fins and olive marbled vermiculation across the back. Each one is a prize for beauty. ­

Dani: Tell us about your guide business True North Trout… 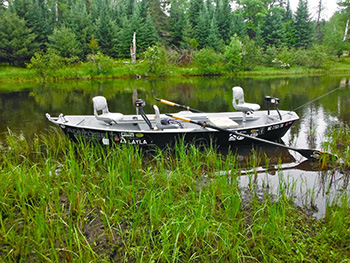 Brian: True North Trout happened by coincidence. Jordan Lindberg, the mastermind and editor of TNT, emailed me a few years back and asked if I would consider taking over his blog. I was hesitant to say the least. My wife encouraged me and said it would be a good learning experience. Now, I donate trips to non­profits such as Crooked Tree Arts, Habitat for Humanity and the Women’s Resource Center simply to show more people the natural beauty that surrounds us. Guests used to come into Cafe` Sante, where I worked as a server, to find out about the latest hatches. Eventually guiding part time became full time. True North Trout has grown exponentially. My guide trips provide a memorable learning experience. Using fresh local produce from the Farmers Market and sandwiches from Boyne Provisions gives clients a taste of Up North in my Adipose Flow driftboat—the first of its kind here in Michigan!

Dani: Where can we go to find out more or book a trip?