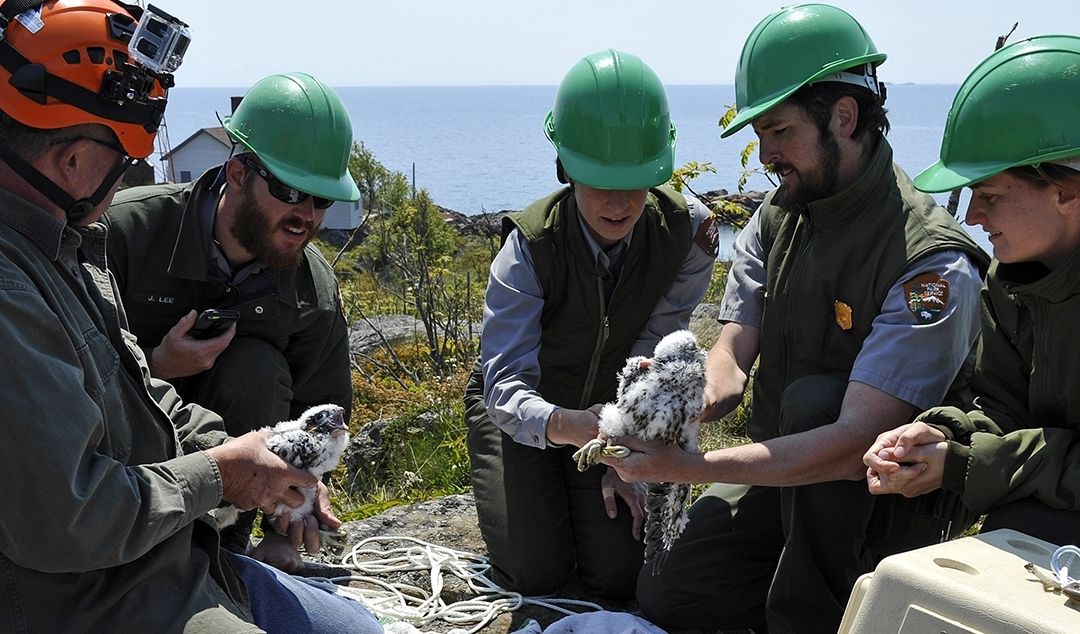 ISLE ROYALE NATIONAL PARK: Peregrine falcons can dive for prey at speeds of nearly 200 miles per hour, making them the fastest-flying bird in the world.

Recently on Isle Royale National Park, Department of Natural Resources and National Park Service staff members banded three 4-week-old chicks. The chicks were in an eyrie, or natural nest, on a rock cliff 200 feet above Lake Superior, on Passage Island. Although no longer federally endangered, peregrine falcons still are considered rare and are listed on Michigan’s endangered species list. Approximately 139 peregrine falcons are found in Michigan.

Two female chicks and one male chick each received two bands on their legs – one bicolored band, with large numbers that can be read from a distance, and a U.S. Fish and Wildlife Service Band, which usually is silver and bears a serial number specific to that bird. These bands are placed on young birds so that scientists can monitor and track the dispersal, migration, life span, reproductive success, behavior and population growth of the falcons. 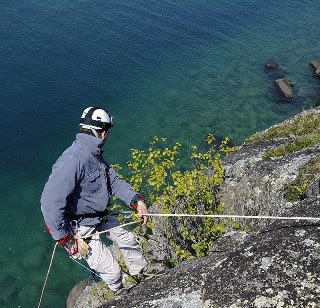 “The banding went great for the unique location of these birds,” said DNR wildlife biologist John DePue. “Most falcons we band in Michigan nest on man-made structures. Here we had a natural nest, which made access a challenge. Banding was successful with the collaboration of staff from the National Park Service and the DNR.”

Typically, peregrine falcons will nest at high elevations on tall buildings, bridges or cliffs, where updraft currents are available. A ready food source, such as starlings and pigeons, is available in urban settings, which also offer great protection from natural predators like the great horned owl. In an undeveloped setting, such as the cliffs of Lake Superior, falcons’ diet consists of a wide variety of small birds, seabirds, shorebirds, songbirds and the occasional duck. Peregrines tend to return to the same nest annually, and normally birds from Michigan will be found in Canada, Ohio, Wisconsin and other surrounding states.

“We look forward to seeing just where these three peregrines end up,” said DePue.

Learn more about Michigan’s endangered and nongame wildlife species on the DNR website at www.michigan.gov/nongamewildlife.